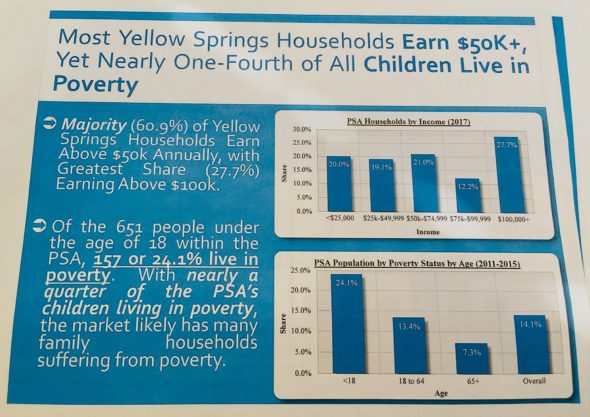 A slide from the Housing Needs Assessment indicating 24% of local children live at poverty levels.

BLOG—”Above all, try something”: On food insecurity in the village

“It is common sense to take a method and try it: If it fails, admit it frankly and try another. But above all, try something.”
—President Franklin Delano Roosevelt, May 22, 1932

I come from a family of big readers. I married a reader. Many of my friends with children don’t get to read like they used to, but talk of empty nests or impending retirement in a quarter century often revolves around books. This is a village of readers and as a writer, I am most appreciative of that fact.

My obsession with FDR began about fifteen years ago. My mother and I will often become interested in the same subjects at the same time; we then pass books back and forth for months, even years, until our curiosity is sated. Our mutual fascination with the Hyde Park Roosevelts has filled an entire bookcase and is heading toward a third decade.

Roosevelt delivered the commencement address at Oglethorpe University in Atlanta, Georgia during an election year, the first of four presidential election years FDR would taste victory, often amidst great struggle in the country. In 1932, he was speaking to an audience still reeling from both the Great War and the Great Depression. That was their experience of greatness.

FDR warned of financial speculation, of the fast and loose ways of Wall Street: “we cannot allow our economic life to be controlled by that small group of men whose chief outlook upon the social welfare is tinctured by the fact that they can make huge profits from the lending of money and the marketing of securities—an outlook which deserves the adjectives ‘selfish’ and ‘opportunists’.” He chastised the educational system for continuing to produce graduates for whom there were too few jobs and too many applicants.

Roosevelt was one of the great campaigners in U.S. political history, and there’s no doubt that he was speechifying on that warm May afternoon, but contained in his words was a deep understanding of both what hadn’t worked and what needed to be done. FDR and his cabinet invented the one hundred days landmark that is now part and parcel of measuring presidential success and competence, Their flurry of legislation and organizations created a governmental alphabet soup; Roosevelt was overturned in the Courts so much he once tried to stack the Supreme Court in his favor to get more of his ideas through.

Reasonable people can disagree on the wisdom of FDR’s approach. But he spent time reading, asking questions, speaking with others, and assessing the best methods to give a whirl. As someone who is studying community organization, I must admit to following, for better or worse, FDR’s model. Above all, try something.

I am grateful to everyone who participated in the six-week project we did last autumn. In the end, I gathered data from eight surveys and questionnaires and conducted numerous interviews. What I discovered was two-fold: one, people are interested in gathering together, in person, for both education and action. Two, villagers want to focus on pressing issues within our village. We want to learn, to act, to support one another in our separate work, but also to come together in something new. Not surprisingly, food was mentioned again and again, not just as a social glue but also as a persistent need.

Food insecurity in the village is a major issue.

At Monday’s Village Council meeting, the Housing Needs Assessment was read into the record. We learned that in addition to 30% of local children receiving free– or reduced–lunches, nearly a quarter of kids live at poverty level or below. While we’re a small community, we’re big enough that poverty often hides in plain sight. Miriam and I are one such family that makes less than the $50k average, but as we don’t have children we are able to subsist on less.

As reported in the News last week, the Beloved Community Project (BCP) is making an effort to address weekend food insecurity in the village. We know that we can’t tackle food insecurity in its totality, not yet, but we can contribute to the amazing work done by the YS Food Pantry, the stop-gap supplies offered by the Little Free Pantry, the weekly lunches during the summer, and other efforts throughout the year.

Eighteen months ago, Kate Anderson came to my office at First Presbyterian Church and said, “I feel called to address food insecurity, but I don’t know what that looks like yet.” Now, with three financial donors and a growing list of volunteers, it seems our prayers are being answered.

For the next five Saturdays (through February 17), from 12–2 pm, there will be a community meal at First Presbyterian. Everyone is invited. If you’re able to bring a covered dish or a food item, please email Kate Anderson (yskate@gmail.com). This, however, is not a requirement. No one will be turned away. In addition to a hot meal, we’ll have a table or two with grocery items to help individuals or families get through the weekend. If you know of someone who is in need but can’t make it, you may take items to deliver to them. We’re hoping to have a delivery system set up, but need to work out the logistics.

In my work as a pastor and as a member of the working poor, I think one of the most important resources we can offer is authentic community experiences. Yes, these Saturdays are aimed at addressing weekend food insecurity issues, but more importantly, they are chances for us to behold and to be held. To be with one another, knowing we each have things to give and all have needs to be met.

We hope that you will come—I know that this Saturday is the Women’s March, so know that I am supporting all who attend in spirit!—and pass on word of this experiment. We’re MacGuyvering each week with prayer and elbow grease, but we hope this is the next step in a meaningful walk to being a community more responsive to the needs of those who often go unseen.

To learn more, email me at revsaari@gmail.com or Kate Anderson at yskate@gmail.com.