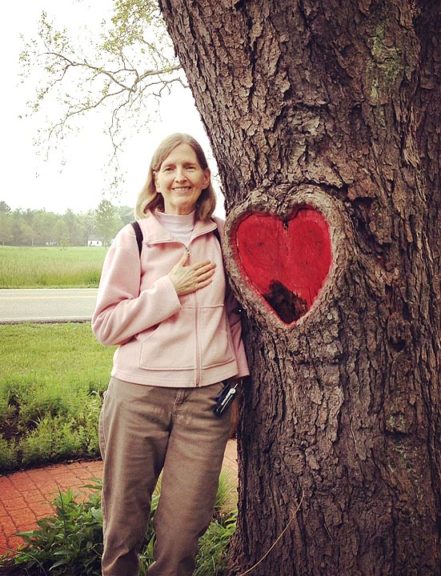 February is American Heart Month, and many don’t know that heart disease is the No. 1 killer of women. Shown above, Lynda Terry of Yellow Springs, who suffered a heart attack in 2011, is shown at a “heart” tree on the bike path after she and her family completed a walk in support of the 1st Annual SCAD Research Walk/Run taking place that day. Terry’s heart attack was caused by SCAD, or spontaneous coronary artery dissection, a rare coronary disease that strikes younger women. (Submitted Photo)

A focus on women’s heart health

In 2011 villager Lynda Terry, then aged 62, would have described herself as healthy, with a history of good health. A teacher of spiritual practices, she meditated each day. She ate well, mostly vegetables and fish, having given up sugar decades earlier. She enjoyed walking, and did so regularly.

But on an August day of that year, she felt unusually tired. Regardless, she carried a big box of the books she had written to the Yellow Springs Book Fair, so she could sell them. Later in the day, she had a difficult phone call that stirred up many emotions.

In the middle of the night, Terry woke up feeling nauseous, with a strange pain radiating down her arm. Though the symptoms weren’t the ones most would expect, Terry believed she was having a heart attack, and asked her husband to call 911. Terry believes it was her good fortune that the rescue squad took her to Miami Valley Hospital in Dayton.

At the hospital, an electrocardiogram, or EKG, showed everything to be normal.  Still, the doctor wanted to keep testing. An enzyme procedure showed that Terry was, indeed, having a heart attack, and she was admitted to the hospital.

While many might find it highly unusual for a healthy woman to have a heart attack, it’s not as unusual as most people think.

“Heart disease is the No. 1 killer of women, although most women don’t know this,” said Beth Langefels of the Kettering office of  the American Heart Association, or AHA,  in an interview this week.

Part of the misunderstanding regarding women and heart disease is because in women the disease often looks different than it does in men. In men, chest pain is the most obvious and common symptom of a heart attack. For women, chest pain may be present, but the main symptoms may be jaw pain, pain in the shoulders or arms, nausea or even just tiredness.

And most of heart disease research is done on men.

“We don’t yet clearly understand why women have different causes and symptoms of heart attacks,” Dr. Laxmi Mehta of Ohio State University said in a Jan. 25, 2016, press release from the Ohio State University Wexner Medical Center. “Women are more complex, there are more biological variables such as hormonal fluctuations. That’s why more research is needed.”

The AHA’s “Go Red for Women” campaign, which emphasizes women and heart health, launched in 2004 after instances of heart disease in women had risen significantly, according to Langefels. The rise coincided with women pursuing careers as well as having children, entering the workplace and leading lives filled with stress.

“It’s a modern issue,” Langefels said. “Most women don’t realize how much stress they’re living with.”

And often, women caring for others aren’t paying attention to their own physical needs.

While the news about women and heart disease is sobering, there are many things they can do to lower their risk of having a heart attack, according to Langefels.

“Eighty percent of heart disease could be eliminated with lifestyle changes,” she said.

For instance, many could add exercise to their daily routine; the AHA calls for 30 minutes a day, or 150 minutes a week, of exercise, even just walking. If women are smokers, they should quit; while most believe that cancer is a smoker’s greatest risk, heart disease actually kills more smokers than does lung cancer. If one is overweight, losing weight is important, as well as a healthy diet. Women should also have annual physicals to monitor their cholesterol and blood pressure numbers;  if the numbers are too high, medication or lifestyle changes might be called for.

“Know your numbers,” Langefels said, encouraging women to also know their family’s history of heart disease, and to share that information with their doctor.

While most heart disease involves the narrowing or blockage of arteries, Terry had a more unusual type, called SCAD, which stands for spontaneous coronary artery dissection. SCAD, which involves a tear in the artery, is known to be especially dangerous to women, and especially younger women: the disease usually strikes women in their 40s and 50s.

For Terry, successful treatment began with the placement of six stents in her arteries during her Miami Valley Hospital stay. While the stents have worked for her, they’re an example of how SCAD treatment differs from treatment of more common cardiac disease, when stents are often used to open narrowed arteries. In SCAD patients, however, stents can cause further damage to the artery.

An additional part of Terry’s recovery was finding others struggling with the same disease. While SCAD had until recently been seen as so rare that there were too few patients to research, an online community has emerged in recent years.

Terry’s successful treatment also included finding doctors she feels comfortable with. She wanted a female doctor who was familiar with women’s heart disease, and has been very satisfied with Dr. Mehta of Ohio State. And she travels each year to the Cleveland Clinic for a second opinion.

For Lynda Terry, life at aged 69 is slow and quiet — other health problems have emerged, so that she is limited in her activity. She remains dedicated to meditation, and hopes to write at least one more book, following her previous one, “The 11 Intentions: Invoking the Sacred Feminine as a Pathway to Inner Peace.” She also finds satisfaction in communicating with the online SCAD community of women, which has grown from an original 70 women to 2,700.

“That’s my other therapy,” she said.

Learning to live with SCAD has also emerged as a spiritual practice in itself, in which she takes great pleasure in everyday activities.

“Living with a condition where there could be another major life-threatening episode at any time does bring some gifts,” she wrote in an email. “For one, it has made me appreciate even more my spiritual practices, especially meditation, chanting, prayer. They are resources I can draw on anywhere, anytime, if I am having symptoms or feeling anxiety about my heart health.”

She also feels more appreciative of time spent with family, and living in the small, caring community of Yellow Springs.

Terry is passionate about sharing her story, in the hope that other women are better informed about the risks of heart disease, and especially of SCAD, and therefore take steps to help themselves.

“No matter how young or healthy you are, if you have symptoms, call 911,” she said, adding, “If only one woman is helped from my story, it’s worth it.”