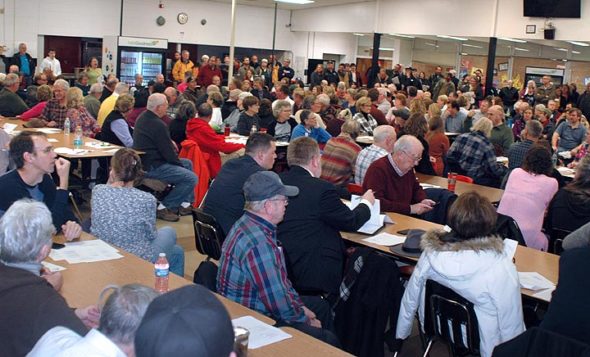 About 300 citizens packed the cafeteria of Greenon High School last Thursday to oppose a planned limestone quarrying project in Mad River Township, a few miles north of Yellow Springs. Ohio EPA organized the hearing, which was focused on one aspect of the project, a permit for wastewater discharge from the quarry. (Photo by Audrey Hackett)

About 300 citizens packed the cafeteria of Greenon High School on Feb. 1 for an Ohio EPA public information session and hearing related to one aspect of the project. Dozens spoke out against the proposed quarry, citing concerns about its impact on human health and the environment.

“We do not want this company or need another aggregate business in this township,” said Carol Culbertson, who lives next door to the proposed mining site and formerly taught at Mills Lawn School. “The environmental risks and costs are too great. Deny this permit.”

About 30 citizens and elected officials gave legal testimony at the meeting, with another 15 voicing concerns and questions during the Q&A portion. Several OEPA officials attended.

Representatives from the quarry company, Enon Sand & Gravel, were not present for the public hearing, which was organized by Ohio EPA in response to citizen concerns about the project.

Public opposition to the quarry began last March, when Enon Sand & Gravel gave public notice of its intention to mine for limestone on about 400 acres of land in Mad River Township. Area citizens organized rapidly in opposition to those plans, forming a group called Citizens Against Mining, or CAM, which has spearheaded efforts to block the mining project.

While Yellow Springs is several miles away from the quarry sites, and may not see direct impacts from the proposed mining activities, the issue has caught the attention of some local residents. At least a dozen villagers were in attendance at last week’s hearing, including Village Council President Brian Housh.

“It was amazing to me to see a local community with their elected officials all saying, ‘This is not right for our community,’” Housh said this week.

Village Council previously sent a letter opposing the project to Ohio Department of Natural Resources, or ODNR, the main permitting authority for mining activities in the state, during a public comment period last spring. Council does not plan further public statements at this time, but remains engaged with the issue, according to Housh.

“It’s important that Yellow Springs thinks about regional connections … and that we collaborate with other communities,” Housh said.

Despite concern from area citizens and elected officials, ODNR granted Enon Sand & Gravel the mining permits for the Mad River Township site last July. No work has begun on the project, however. CAM, the citizen group, is currently appealing the ODNR’s permit decision. The quarry has also been opposed by the Clark County Board of Commissioners and the county zoning board, which contend that the company needs local zoning approval before the project can go forward. The company rejects those claims, and is suing the county in federal court. That case is ongoing.

Last week’s Ohio EPA hearing is a separate step in the process. It concerns a permit request for just one aspect of the overall project, the discharge of wastewater from the quarry into nearby waterways. Permit reviewer Bob Ostendorf was among the OEPA officials who spoke at the meeting.

“The permit is based on rules protecting water quality,” he said.

In October, Enon Sand & Gravel applied to OEPA for the discharge permit, which is known as a National Pollutant Discharge Elimination System, or NPDES, permit. According to an OEPA fact sheet on the wastewater discharge permit process, the NPDES permit “sets limits on the type and quantity of pollutants that can be discharged.”

Specifically, the company is seeking OEPA approval to discharge wastewater from its mining operations into an unnamed tributary of the Mud Run, part of the Mad River watershed, at a volume of up to 2.16 million gallons of wastewater per day. The company’s permit application states that the wastewater would consist of ground water, storm water and “wash water,” or water used to wash the extracted limestone. The wastewater would first be pumped into a settling pond, then discharged into the Mud Run tributary.

According to information in the permit application, the discharged wastewater would contain two regulated pollutants, pH and total suspended solids, or TSS, but at levels less than the maximums set by Ohio Revised Code. Other pollutants are absent, the company states.

“Oil and grease are believed to be absent from the discharge due to the nature of the operations,” the permit application reads.

The OEPA is currently reviewing the permit request. Public input is part of the agency’s review, though public hearings are not typically scheduled unless there is a high level of public interest, as there is in this case, according to OEPA spokesperson Dina Pierce.

“We know there’s a lot of public interest. We want to hear people’s concerns,” she said in an interview last week.

Public comment during the legal portion of the hearing is part of the public record and will be used by the OEPA to evaluate the company’s permit application. OEPA also accepted written comments through Feb. 8.

“We received some really good comments,” Pierce said this week of the recent hearing. “We’ll be responding and doing further research” based on citizen comments, she added.

At last week’s hearing, area residents voiced a range of specific concerns about the planned wastewater discharge and its impact on local ecology.

Mad River Township Trustee Kathy Estep read a lengthy statement, to crowd applause, about what the trustees view as the incomplete and inaccurate information provided on Enon Sand & Gravel’s permit application. Of particular concern is the presence of chemicals used in blasting activities, Estep said. Blasting is part of the company’s mining plan for the area.

“Blasting will require the use of thousands of pounds of nitrogen- and fuel oil- containing explosives,” she stated. Those chemicals will contaminate ground water and the wastewater the company plans to discharge, yet are not mentioned specifically in the permit application, according to Estep.

Contacted by email Monday for comment on these and other citizen concerns, Enon Sand & Gravel President Dennis Garrison responded on Tuesday he was unable to provide a statement by press time.

According to many who spoke at the hearing, the discharge could lower water quality of both surface and ground water in Mad River Township, and could increase erosion and flooding in an area already prone to floods. The impact of discharge on nearby wetlands was also a stated concern.

The Mad River watershed lies north of Yellow Springs and is not the source of local drinking water. However, public and private wells just north of the village, including at Glen Helen’s Outdoor Education Center, are within a five-mile radius of the quarry site and could be affected, according to previous statements by OEPA.

“Overall, I oppose this permit on the basis that it has a good potential to contaminate ground water,” she said. The potential for ground water contamination in the area is high due to geologic formations called karsts, Magaw added.

The project is of concern to TLT because the land trust has conservation easements on 4,377 acres within three miles of the proposed quarry areas, she said.

A retired OEPA official from the drinking and ground water division, Tom Allen, speaking as a private citizen, raised similar water quality concerns. He identified half a dozen specific environmental studies needed to ensure that discharge would not harm water resources and wetlands in the area.

“This kind of land use is incongruent with the current land use and will negatively impact both the social and environmental resources for the citizens in this area and all of Ohio,” he concluded.

OEPA spokesperson Pierce acknowledged that “any discharge has some impact” on the receiving waterway.

“The purpose of the permit is to make sure, if discharge is allowed, it stays within water quality standards for that stream,” she said.

OEPA’s next step is to review citizen comments and respond in writing to specific questions raised during the hearing. Pierce said this week that it was “too early to say” how public input might factor into this particular case. She stressed that OEPA can only consider comments directly relevant to the discharge issue, not the project as a whole.

After reviewing comments and potentially going back to the company for more information, the agency will decide either to deny the permit or approve a draft permit. If a draft permit is approved, OEPA would likely hold a second public hearing, according to Pierce. From there, OEPA would deny or approve a final permit. No timeline has been set for this process, Pierce said.

OEPA officials were asked by several citizens at the hearing whether they had denied NPDES permits in the past. Officials didn’t provide a specific answer during the meeting, but Pierce said in a follow-up interview with the News this week that permits are infrequently denied because companies tend to “drop or revise” applications that don’t meet Ohio Revised Code criteria prior to the OEPA making a decision.

“We tell the applicant we’re not going to be able to approve it,” she explained. “They’ll just take it back … or maybe they’ll resubmit” to meet standards, she explained.

“It’s not a popularity contest,” she said. “The EPA doesn’t get to say we don’t like this business, we do like that business.”

Citizens Against Mining co-founder Kyle Peterson said his group considered the recent hearing an “overwhelming” success. CAM was active in promoting attendance and encouraging citizens to make formal statements at the hearing.

“We were thrilled with the range of people — environmentalists, politicians, homeowners — providing relevant information,” he said. “If the evidence we’ve provided doesn’t have an impact [on the OEPA decision], what will?”

Meanwhile, CAM intends to continue its organizing efforts, including raising money for legal fees and testimony by outside experts.

“We’re committed to fighting this at every level,” he said.