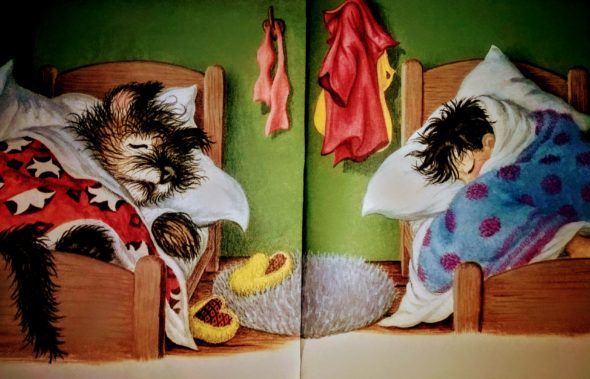 "And he dreamed his own dreams." From "Mister Dog: The Dog Who Belonged to Himself," by Margaret Wise Brown.

One of my favorite books as a very young kid was “Mister Dog,” by the prolific children’s book author Margaret Wise Brown. The book tells the story of a dog named Crispin’s Crispian who “belongs to himself.” He lives in a two-story dog house with “a little fur living room,” in which he smokes a dog-pipe and lives his quiet life. He is a “conservative” — which, in this 1952 picture book for kids, at least, means: “He liked everything at the right time – dinner at dinner time, lunch at lunchtime, breakfast in time for breakfast, and sunrise at sunrise, and sunset at sunset. And at bedtime he liked everything in its own place – the cup in the saucer, the chair under the table, the stars in the heavens, the moon in the sky, and himself in his own little bed.”

I loved everything about this book: the lush drawings by Garth Williams, the colorful non-sequiturs — “In the mornings, he woke himself up and he went to the icebox and gave himself some bread and milk. He was a funny old dog. He liked strawberries.” — and, more than anything, the idea of being comfortably alone and autonomous. Other favorite literary works of childhood and adolescence continued along that same pattern: “The Boxcar Children.” “My Side of the Mountain.” A terrible Sherlock Holmes pastiche called “Dead Man’s Confession,” about the famed detective’s teenaged great-granddaughter, who takes over her late father’s detective agency and lives alone. And in high school, Thoreau’s “Walden” — or the perceived spirit behind it, anyway, as I’m pretty sure I never finished that one, even though15-year-old me totally bragged that I did.

This idea — of belonging to oneself, of being accountable only to oneself — can be very attractive to a young person, especially if she likes to do things in her own, weird little way. I remember a particular fascination with eating only boiled foods when I was 8 or 9, which my family found repugnant. Not wanting to be judged for my culinary choices — which have since improved, at least somewhat — I would often retreat to a corner of the backyard fence, over which hung the drooping branches of some willowy bush, and pretend I was living in my own home, alone. Years later, in college, I would dream of buying a shed at Lowe’s, dropping it in the woods somewhere and holing up for the rest of my life.

Ultimately, I settled for an apartment in Kentucky. For two years in Lexington, I belonged only to myself. When I wasn’t working, I did everything, always, 100 percent on my own schedule. Slept, ate, bathed when I wanted to. Fell asleep on the couch to Harry Potter DVDs when I wanted to. Listened to podcasts for hours while I did weird crafts. Wrote and recorded songs. Wrote stories. Creatively, it was the most productive time of my life.

Naturally, it was also, at times, very lonely.

About halfway through “Mister Dog,” Crispin’s Crispian runs — smack! — into a little boy who is fishing in the lake. The boy — who, if he has a name, doesn’t offer it — tells Crispin’s Crispian that he, too, belongs to himself. Crispin’s Crispian invites him to come along to the butcher shop with him and ultimately become his roommate. Each of them buys their own food, and cooks their own dinner — they share some of what they bought, but Brown makes it very clear that each is cooking his food in his own way, without offering help or advice — and they eat together. After cleaning up, both retire to their separate beds for the evening, comfortably alone together — where the boy dreams his own dreams, and Mister Dog dreams his.

I’m 34 now, with a husband and child, and about a decade has passed since the last time I lived alone. In my own little house — in which breakfast is not always at breakfast time, things are rarely in their own place and I come too late to my own little bed — it can feel like a real struggle, sometimes, to belong to myself.

I really feel what I believe to be Margaret Wise Brown’s intended message — because this is a children’s book, and they usually have messages — on the rare days and nights when I’m by myself at home and wishing my family were there. The message is that there’s a difference between being yourself and closing yourself off to the world; a difference between being autonomous and being alone. It can be difficult to be part of a unit, and also be fully yourself. I don’t do nearly as many crafts as I used to — but my daughter and I just spent several days making Nintendo characters out of Perler beads, so there’s that. And we listen to podcasts together now — though not usually for hours. I do not find it surprising that all three of us are drawn to the philosophy of “Mister Dog.” If Crispin’s Crispian and the boy had gotten married at the end of the book, it would be very much like the way the romance blossomed between my husband and myself.

We are still striving toward that Crispian ideal: a household in which all occupants love and are supportive of one another, but who have the space to pursue their own interests and take care of their own stuff. This is fairly unrealistic in a house with a 7-year-old and two adults who work full time, but it’s something to dream about. And like the boy and the dog, like my husband and daughter, when I curl up in my own little bed at night, I still get to dream my own dreams.

(For fans of Margaret Wise Brown, and “Mister Dog” in particular, I recommend a 2007 essay from the “New York Wanderer” blog, about Brown’s life, love and her own dog — named Crispin’s Crispian, of course. Click here to read it.)