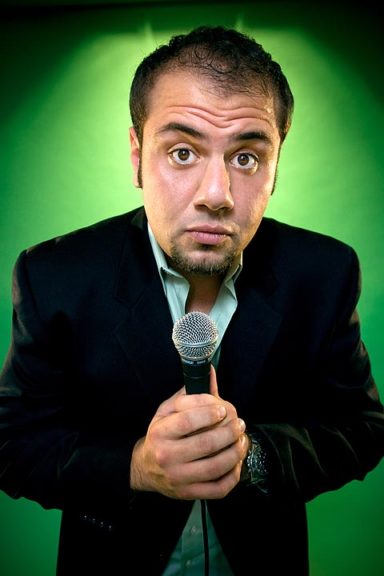 A comedian who recently made his network TV debut on The Late Show with Stephen Colbert after performing as the opening act on Dave Chappelle’s 2015 national tour, has been snagged to perform in Yellow Springs for the Antioch School’s annual Auction Gala event.

Mo Amer, a rising comic of Arab and Muslim heritage, will close the major fundraising event Saturday, March 3, at the Foundry Theater on the Antioch College campus. Tickets for the evening, which also includes a silent and live auction, heavy hors d’oeuvres and an open wine bar, are $50, available through the Antioch School. Proceeds go to the school’s scholarship fund.

“I’m really excited about the comedian coming this year,” Laura Skidmore, chair of this year’s Auction Gala committee, said earlier this week. “I think he’s going to be a very popular attraction for the event.”

Amer, who came with family members to the United States from Kuwait during the first Gulf War, is a walking testament to the notion of the personal as political, as he finds humor in all the paradoxes and absurd contractions that populate the personal/political landscape.

He was eight years old when his family left the Middle East as refugees, settling in Houston, Texas, according to his press bio. In videos of various performances, he tells audiences how although he spoke English with a crisp British accent, he was placed in an ESL (English as a second language) classroom filled with Spanish speaking kids. On stage, he jokes that the experience left him fluent in Spanish.

As a Muslim with the given name Mohammed — “Mo” is a shortened stage name — he offers insights into controversial issues that currently dominate international headlines. And he uses humor — part memoir, part improvisation — as a way to traverse differences and affirm shared humanity.

“Hilarious, thought-provoking and inspiring,” is how Dave Chappelle describes his fellow funnyman as quoted in Amer’s press materials.

Amer’s appearance at the Antioch School Gala resumes the school’s practice in recent years of featuring a comedian at the event, after bringing in a musician last year. Past humorists have been Julia Sweeney, twice, Milt Abel, Leighann Lord and Suzanne Westenhoeffer.

“We want to hear different points of view and comedy from all parts of life,” she said in a telephone interview this week.

The annual Auction Gala also supports the school’s overall diversity in its purpose of raising money for scholarships, Griffin said.

Of the 62 students currently enrolled in  the school, a majority receive at least some scholarship assistance, Griffin said.

The school has set an overall fundraising goal of $75,000 this year, with $50,000 of that to go toward scholarships, Griffin said. The Gala’s goal is to raise at least $30,000 toward those scholarship goals.

“The more we can get out of the event the better,” Griffin said.

More than 100 items, donated by local businesses, services and individuals, will be available through the silent auction, event chair Skidmore said. Available items include B&B overnight getaways, fine dining at area restaurants, tickets to theatrical and cultural events, fine art and jewelry from local artisans and health and wellness sessions.

About five large packages, to be announced, will be highlighted in the live auction part of the evening. Live auction items in the past have included a one-week stay at St. Croix, a “Day in the Life” documentary featuring the winner’s family, created by an Emmy Award-winning Yellow Springs-based filmmaker; and a private wine tasting with the area’s leading sommelier.

Locally based Current Cuisine, whose owners have a grandchild at the school, will be catering the event for the sixth year.

The Gala has become an important part of the school’s year and of the broader community’s year as well, Griffin said.

For her part, Skidmore said she looks forward to the evening.

“I love the event, and I love seeing so many people from the community,” she said. “It’s a special event, and it’s a lot of fun.”

Seating is limited, but tickets are still available and can be purchased through a Paypal link on the Antioch School website — http://www.antiochschool.org — or by calling Griffin at the school at 937-767-7642.