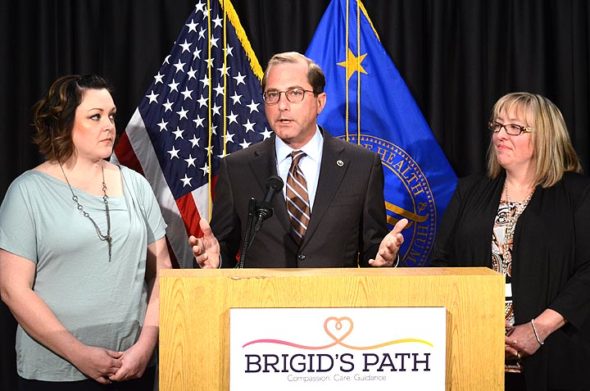 U.S. Secretary of Health and Human Services Alex Azar, visiting the Dayton area recently to learn about responses to the opioid crisis, said he sees no role for medical marijuana as a pain relief alternative to prescription opioids.

“There is no FDA approved use of marijuana, a botanical plant,” he added. “I  want to be very clear about that.”

Azar’s comment came in response to a question from the Yellow Springs News about the role that medical marijuana might play as a pain relief alternative to prescription opioids, citing a study published in the American Journal of Public Health last year that found marijuana legalization in Colorado correlated with a reduction of opioid deaths there by 6.5 percent in two years.

Azar, a former president of the U.S. arm of the pharmaceutical firm Eli Lilly & Co., said the focus of the administration is instead on a public-private partnership to research new pain relief alternatives.

“Over $750 million just in 2019 alone is going to be dedicated to the National Institutes of Health working in a public-private partnership to try to develop the next generations of pain therapies that are not opioids, as well as to develop the best evidence around alternative ways of treating pain that do not involve opioids,” Azar said. “So that’s where our focus is.”

In response to Azar’s statement, Cresco  co-founder Charlie Bachtell stated in an email this week, “The Secretary gave a technically correct statement. While the anecdotal evidence is overwhelming and impossible to deny, we all can agree that the FDA’s approval of more research on this subject matter would be beneficial.”

Among the qualifying medical conditions that can soon be treated with medical marijuana in Ohio are “pain that is either chronic and severe or intractable,” according to the Ohio Medical Marijuana Control Program. While 29 states have legalized marijuana for medical use, marijuana is listed by the U.S. Drug Enforcement Agency as a Schedule I drug with “no currently accepted medical use and a high potential for abuse,” a classification that the DEA reaffirmed in 2016. Meanwhile, medical marijuana will be available to Ohioans with qualifying medical conditions beginning in September.

Azar emphasized that the opioid crisis should be tackled with a combination of prevention and treatment. He cited statistics that opioid-related deaths in Ohio rose by 30 percent last year, and said his visit to the Dayton area has reinforced his sense of urgency to tackle the crisis.

“The crisis has hit hard in the Midwest and Ohio in particular,” he said. Ohio was second in the nation in drug overdose deaths in 2016 and drug overdoses are now the leading cause of death among Americans under 50 years old, according to the Centers for Disease Control and Prevention.

Azar was visiting Brigid’s Path in Kettering, an inpatient facility that treats newborns exposed to opioids in the womb, helps mothers to recover from their addiction and supports families in this transition. The babies often need to be held for 24 hours per day, according to one volunteer at the center, and not a single baby coming through the facility has had to enter foster care.

Azar was there to learn about the facility, which is currently privately funded. He also discussed with U.S. Representative Mike Turner, R-Dayton, options for federal funding the facility, and others like it, through Medicaid. Turner recently introduced legislation that would clear the way for states to use Medicaid to fund them.

Since the Trump administration declared the opioid crisis a national public health emergency last year, the Department of Health and Human Services has begun working closely with communities “hard hit by this crisis,” Azar said. The department is also confronting specific health challenges presented by the epidemic, including the “heartbreaking challenge of infants who are born dependent on opioids,” Azar said.

“These voices help inform us of what’s happening on the local level to try to help  … the people on the front lines of this war,” Azar said of his visit. He ended with a plea for community-based healing.

“As a country we need to step up to support each other and heal each other, together.”