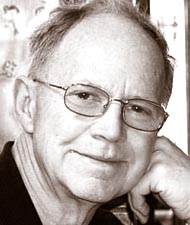 Bill was known for his creative problem-solving and ability to build, fix or break anything he put his hands to. He moved and talked quickly. He encouraged others to be creative and improve themselves. At 47, Bill’s face stiffened, his hand trembled and his gait faltered. Power tools and lathes were not safe instruments in his hands. But he did not lose the twinkle in his eye. His breakfast friends at Dino’s helped him in his 28-year battle with Parkinson’s Disease.

Memorial service is Friday, March 16, at 1 p.m. at the Clifton Presbyterian Church, 183 Jackson Street, Clifton, Ohio 45316. In lieu of flowers, donations may be made to the Michael J. Fox Foundation. A tribute page has been set up at http://www.michaeljfox.org/tribute; search “Sweet.” Arrangements by Baker-Osinski-Kensinger Funeral Home, Berea. Online condolences at http://www.bakerfuneralberea.com.

One Response to “William “Bill” Sweet”