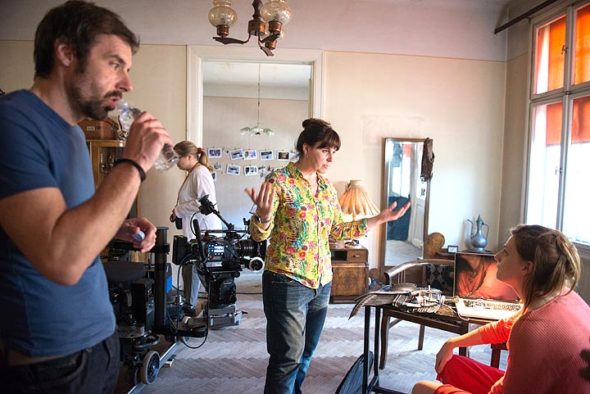 Bosnian filmmaker Ines Tanovic is shown during the production of “Our Everyday Life,” to be screened on Wednesday, April 4, at 7 p.m. at the Little Art Theatre. Tanovic will be present at the screening,which is funded by Wittenberg University. (Submitted photo)

Next week villagers have the opportunity to take a close look at current lives inside Bosnia, in the city of Sarajevo, the sister city of Dayton, more than 20 years after the Dayton Peace Accords.

“It’s an authentic, clear window into life in Sarajevo today,” said villager Keith Doubt of the film “Our Everyday Life.” The award-winning film will be shown next Wednesday, April 4, at the Little Art Theatre. There is also a showing in Dayton on Tuesday, April 3.

The film’s director, Bosnian filmmaker Ines Tanovic, will be present at the Yellow Springs showing, and will answer questions.

The film, which has been featured at a variety of European film festivals, dramatizes “the day-to-day lives of one family in Sarajevo in the unresolved political situation and the economic hardships of postwar Bosnia,” according to a press release. “An entire generation of people in Bosnia, who are now in their forties, lost their youth in the war, but today they are offered neither freedom, successful jobs, nor hope in their society. Their lives are stagnant.”

The screening is made possible by a grant from Wittenberg University, where Doubt teaches sociology. It is sponsored by Duh Bosne, a non-profit organization that publishes the bilingual online journal “Spirit of Bosnia/Duh Bosne,” whose mission is to “preserve and honor the long-standing traditions of social and civil order that created Bosnia’s noble heritage.”

That heritage is impressive, according to Doubt, who has focused his research on the region since becoming interested during the Bosnian conflict in the mid-1990s. Since then, he has written three books on the area and traveled there more than 25 times, sometimes on a Fulbright scholarship. He plans to return this spring.

Most impressive about the area before the conflict was its diversity, and the vitality that accompanied that diversity — Serbians, Croats and Muslims co-existed in a dynamic, multi-ethnic society.

“The best writers, the best rock bands, the best films — they were always from Sarajevo,” he said in a recent interview. “There was a creativity that bubbled up there.”

But the war changed all that. In Doubt’s estimation, the Dayton Accords preserved and even institutionalized ethnic tensions as it divided the country up among Serbians, Muslims and Croatians and their political leaders. Today, those leaders emphasize ethnic fears and anger to block decisions necessary for the country as a whole to move ahead, he believes.

“The Dayton Accords buys into the logic of nationalism,” he said.

The result is a static economy and society in which people’s futures seem limited.
“The pain lingers,” he said.

In a Jan. 5, 2016, interview with “The Desert Sun,” Director Tanovic described the film:
“I wanted to make a simple story about an ordinary family to help people from other countries understand how we feel in Bosnia. We can’t live normally because we are living in an artificial peace. … We still have the effects of war.”

“Our Everyday Life” will show next Wednesday, April 4, at 7 p.m. at the Little Art Theatre.