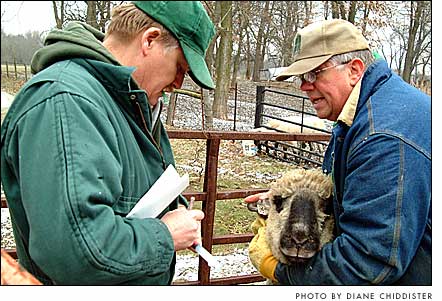 Veterinarian Scott Hosket left, talking with Randy Rife about one of his sheep during visit to Rife’s Miami Township farm. (Photo by Diane Chiddister)

There’s nothing ordinary for this veterinarian

This story was originally published in the March 31, 2005 edition of the Yellow Springs News.

It’s springtime, and on area farms cows, sheep and horses are having babies and also, like humans, catching the sniffles. All of which means that local vet Scott Hosket, a busy man in any season, finds himself traveling on dirt roads late at night and getting even less sleep than usual.

Some villagers may not know that Yellow Springs has its own James Herriot, a country vet who cares for all creatures—well, almost all creatures—great and small. Hosket carries on a dying tradition, responding night and day, in weather sometimes cold and wet and icy, to the needs of our most helpless beings.

Hosket’s staff knows that no matter how many appointments they schedule for him, he will end up with more, because animal emergencies seldom take place between 9 and 5. In a recent week he was called out at 3:30 a.m. to care for a donkey struck by a truck near Jamestown, and the next evening he tended a llama with breathing problems. In both cases, Hosket didn’t think twice. He put on his coat, fired up his truck and went out into the dark and cold.

While Hosket said he sometimes considers using an answering machine rather than taking his after-hours calls, so far he answers the phone himself.

He does so, he said, because his clients depend on him. And of course, there’s something else too, the same something that drew him to veterinary medicine almost 30 years ago. He wants to be around animals, to do what he can to care for them, and to witness the miracle of their births.

For instance, in that same week, Hosket performed a Caesarean section on a ewe giving birth to a large male lamb, a situation that could have ended up killing either the mother or baby. But when he left, the ewe was fine and the lamb was just standing up. And not long after a farmer called about a cow having a difficult labor out in a woods, and Hosket traipsed out to find her.

“I went out to her, reached in and pulled the calf out,” he said. “I do enjoy that quite a bit. You can’t put a price tag on it.”

Not that there aren’t days that try his patience. For instance, one morning he was kicked by a horse, then, at the next stop, charged by a cow. Driving back to his office with a sore chest and sore leg, he decided he’d just have to stop working on large animals.

But then at his office Hosket opened the door to find a growling Rottweiler, who had been spayed earlier in the day and had escaped from his cage. Well, fine, he thought, he’d stop working on small animals, too.

Of course, that resolution lasted a few seconds at most, and Hosket’s calm temperament won the day.

“I figured that problems come in threes and that was my three for the day,” he said.

Growing up in Yellow Springs, Hosket dreamed of becoming a vet. He was the kind of boy who brought home any animal he could find, including frogs, snakes and turtles. His father also loves animals, and his mother worked as a nurse, so Hosket figures his profession combines a little bit of both parents..

Hosket graduated from Ohio State’s School of Veterinary Medicine in 1977. He initially got a job working with dairy cattle in Wisconsin and then, in 1981, moved back to his hometown to take over the practice of Dr. Howard Smith, who worked only with farm animals. But unlike most of his veterinary school colleagues, Hosket wanted to work on both large and small animals, so he added dogs, cats and other pets to the practice.

More than 25 years later, Hosket is happy with his choice. He’ll work with any sort of farm animal, all household pets, including hamsters and guinea pigs, and also takes care of exotic animals, including llamas, alpacas and emus. So far, he said, he’s turned down only two species. He’d prefer not to work on ostriches, which have an alarming habit of pecking on the top of people’s heads. And he’ll pass on skunks.

Veterinary medicine is changing, Hosket said, and most vets now specialize in order to make more money. But making more money was never a priority for Hosket, who until recently let his clients run a tab when they brought in their pets. But that practice led to problems, he said, and he’s reluctantly starting to phase it out.

While Hosket’s country vet practice means working long hours and putting about 100 miles a day on his truck, it also means that each day holds surprises. One day last week, he was called to the exotic animal farm of Bob Louderback in Xenia to take blood samples from miniature horses. Louderback estimates that he has about 100 animals, including zebras, elk, wallabies, turkeys and black buck, and he picks Hosket to care for them all.

“He’s about the best vet around and he’s not afraid to work on them,” Louderback said as Hosket drew blood from a pony that caused far more ruckus than his size would suggest. “He’s knowledgeable about all of them and if he doesn’t know, he’ll find out.”

After that call, Hosket headed to a farm outside Cedarville, where a dairy cow who gave birth three days before wouldn’t stand up. Hosket diagnosed the cow’s ailment as mastitis and gave her a shot of antibiotics. Just when he was about to head home for lunch, one of his employees, Debbie Krajicek, called about an emergency C-section on a cow in Bellbrook, so he headed south instead.

While he tries to schedule two hours a day for lunch, to give himself a break during the long hours, he said, “I’m lucky if I get 20 minutes.”

Krajicek said that before she began working for Hosket about 10 years ago, he was the vet she preferred for the cows and sheep on her farm.

“When you deal with animals, you see a lot of vets,” Krajicek said. “Honestly, I think he’s amazing. He seems to instinctively have a feeling of what’s going on with an animal. He’s thinking about the animal and about the people, too. He’s genuinely caring that way.”

Clients come to Hosket from towns all over the area, Krajicek said. One who traveled to his office last week was Amy Edwards of Troy, who brought her year-old Yorkshire terrier, named York, for his shots.

“There’s no one else I trust,” said Edwards, who used to bring her animals to Hosket when she lived in Fairborn. “I don’t want to take him to just anyone.”

York proved a challenge to even the mild-mannered Hosket, and the dog snarled and growled whenever anyone, including the vet, came near. Even York’s owner couldn’t get close enough to muzzle her pet, and the shot seemed an unlikely bet until Hosket tried a low-tech solution — he threw his coat over the dog and held him close while he administered the vaccine, never losing his calm demeanor.

“One thing I learned quick,” Hosket said as the tiny dog snarled. “You don’t lose your temper. It doesn’t do any good.”

Growling dogs is one difficult part of Hosket’s job and euthanizing old or sick animals is another. He said he most often feels that he’s doing the animal a service by putting it out of its misery. But euthanizing can still be draining. Last week, he said, he had trouble sleeping and realized he had had to euthanize four animals in a few days and it had just got him down.

But all things considered, Hosket said, if he had to choose his career again, he’d do the exact same thing. In fact, he said, he can’t imagine doing anything else.