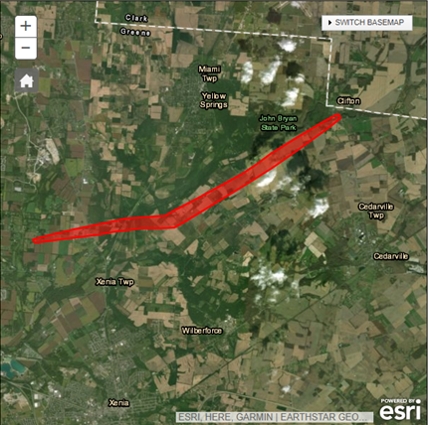 An EF1 rated tornado ripped through on Tuesday, April 3. (photo provided by the National Weather Service in Wilmington, Ohio)

The national weather service confirmed on Wednesday that an EF1 rated tornado with a wind  speed of 95 mph ran through Greene County for about 8.75 miles during Tuesday evening’s storm, damaging homes and barns but leaving zero human casualties.

The damage began in Beavercreek Township, on Ludlow Rd. One farm there saw damage to the roofs of two barns, the roof and chimney of the property’s residence and several trees. Several homes along Ludlow Rd. also saw damage to roofs and windows, among other exterior damage and damage to barns.

The tornado collapsed a chimney, destroyed fencing and flipped a large camper over as it continued eastward towards Clifton Rd. The worst of the damage was inflicted along Clifton Rd. where two homes received damage to siding, roofs and trees. An area sheep farm also lost 5 sheep to the tornado.