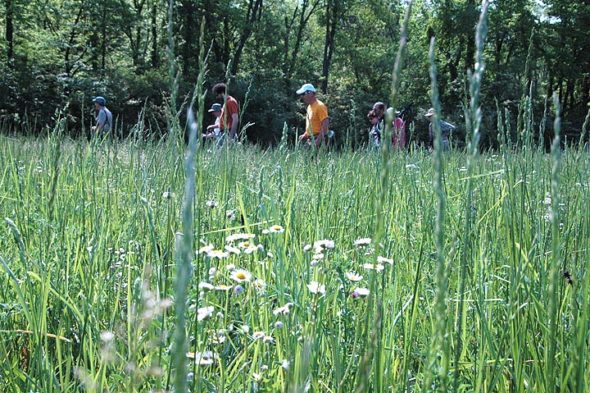 Nick Boutis led a small group of villagers on a public hike of its new property, the 76-acre Sutton Farm. (Photo by Megan Bachman)

A hike through the Glen’s Sutton Farm

The first public hike on the property, walkers traversed once-cultivated fields, wound through a forested corridor, crossed Birch Creek, marveled at centuries-old oaks, listened for birds and noted the abundance of invasive plants along with a few native survivors.

The Sutton Farm is located on the north side State Route 343 just east of Village limits. Read more about the purchase here. 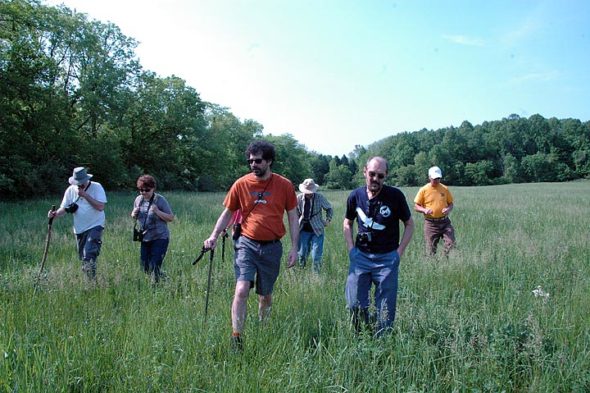 Hikers walk through a field now overgrown, but which was used to grow soybeans exclusively for many years.

Boutis said during the hike the GHA is restoring the property to native forest to improve the quality of Birch Creek before it flows into the Glen. The priority is on land within 100 to 150 feet of the creek.

“What interested us in this property was Birch Creek, which is the creek that becomes the cascades and travels through the most scenic, most ecologically-important part of the Glen,” Boutis said. “We see the Sutton Farm property as a better way to protect Birch Creek.”

Currently, a narrow slice of the riparian corridor is forested, and it is rife with invasives such as honeysuckle, garlic mustard and euonymus. Boutis referred to some areas as a “honeysuckle desert,” since the invasive species blocks sunlight and changes the soil ecology.

“Nothing will grow under honeysuckle,” Boutis said, adding “it doesn’t play nice with others when it comes to soil ecology.” 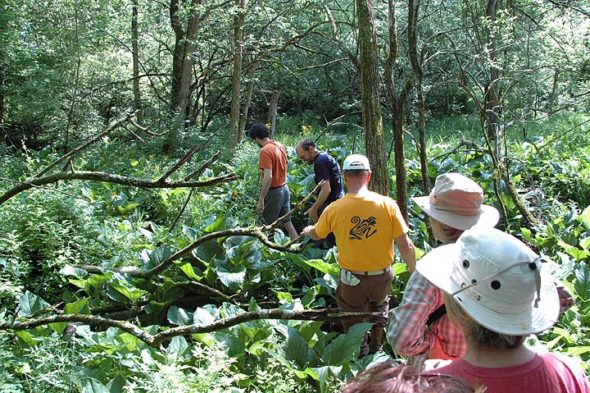 According to Dan Halm, president of the GHA, a Cincinnati horitculturalist cloned the modern honeysuckle that plagues the area to be as vigorous as possible, placing Yellow Springs “at the epicenter” of the honeysuckle epidemic and explaining why the plant out-competes native flora so well. There were a few more ecologically-diverse areas, including one section of forest rich with skunk cabbage.

Hikers also stopped to marvel three “legacy trees” left behind during all those years of farming and grazing, including a massive white oak that is at least 400 years old, a burr oak estimated to be 250 years old, and “as big a shingle oak as you will ever see,” in Boutis’ words. After some discussion about who may have witnessed the white oak through history and what they may have seen, Boutis commented:

“It’s more than implausible that you could have seen a flock of passenger pigeons flying overhead,” Boutis said. “Right next to that cougar.” 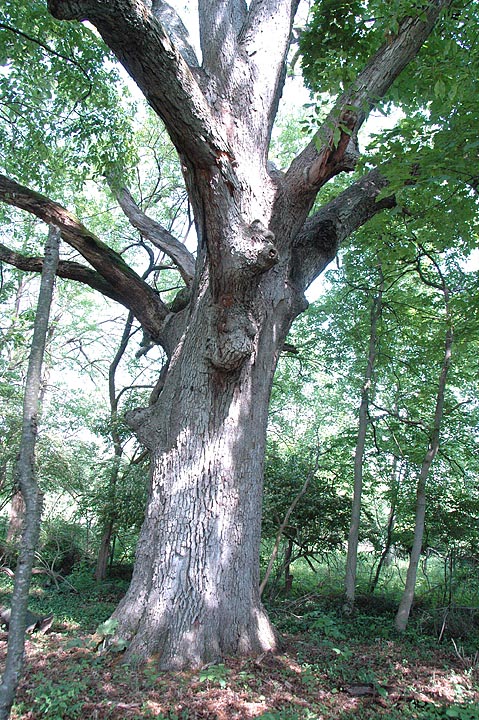 A 400+ year old white oak tree at the Sutton Farm 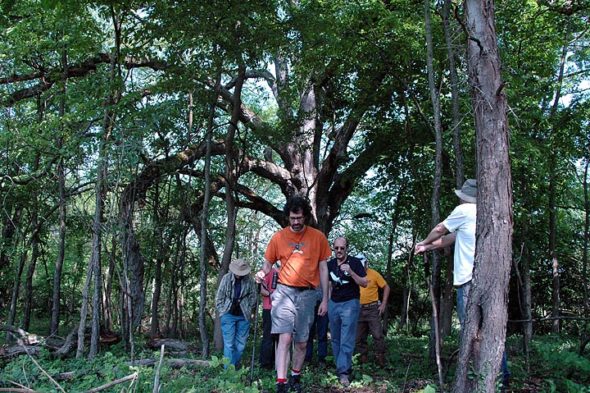 Towering above Boutis is the 400+ year old white oak

Bill Houston, another of the hikers, shared that a similar walk on the Sutton Farm in 1989 led to the formation of the Tecumseh Land Trust. At the time, the Village was considering selling the farm to a nutritional company. The hike led to a realization among some locals that “this is too valuable a resource, we can’t just sell it,” Houston recalled. A conservation easement was soon placed on the farm, TLT’s second, according to Houston.

The recent purchase of the Sutton Farm came out of the Glen’s goal to buffer the nature preserve on all sides, Boutis explained. Although the Sutton Farm wasn’t vulnerable to development because it already had an easement on it, “it wasn’t being managed in a way that was contributing to the health of the area,” Boutis said.

“From a habitat perspective, the land is not supporting the diversity of life that it could because of how it was managed,” Boutis added.

The group traipses through a field that was planted in rye grass last year to keep down invasives.

The Glen has no current plans to create public trails on the property. Instead, Boutis envisions it as a place for scientific research, especially around the question: “How do you restore agricultural system to native forest ecology?”

Gathered under the shingle oak with last year’s acorns rotting away on top of the harvested field, Boutis summed up the goal of the Glen’s restoration efforts at the Sutton Farm:

“We want to create an environment where next year’s acorn will have a shot.”