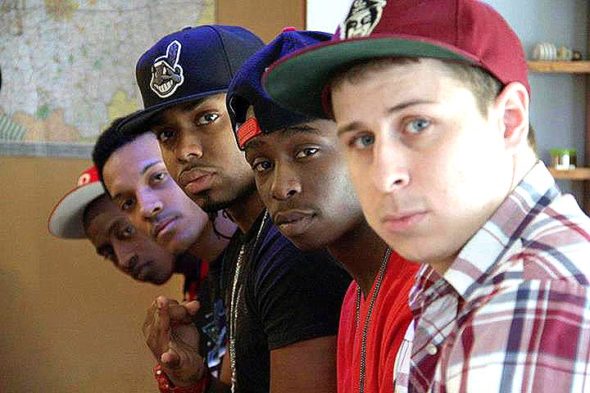 This Saturday, after Street Fair, Antioch College will host Music on Main, a concert organized by a student group called the Antioch Creative Collective, or ACC. The event begins at 5 p.m. and is being held on the lawn in front of Antioch’s Main Building, One Morgan Place.

The concert, which is open to all ages, will be headlined by world-famous rapper Talib Kweli and will also feature local artists Village Fam with Lauren Nicole and Garden Goddess, Speaking Suns, Lori and DJ Creepingbear.

“Our goal was to create the biggest music fest since the reopening of the college,” said Marcell Vanarsdale, an Antioch College student and cofounder of the ACC, in a recent interview. He also stressed the importance of opening Antioch’s doors to new people and creating a culture that fights against divisiveness.

Tickets start at $20 for general admission but Antioch students and faculty will be allowed to enter for free — $15 tickets are available for all other students. In addition to music, the event will host food trucks, art vendors, and beer sales, which will be operated by Bonbright, a Dayton-based distributor.

“It’s going to be refreshing,” said Issa Walker, a villager and member of Village Fam who goes by the rap name Issa Ali, “Because besides Village Fam and the Juke Joint, there really aren’t any rap concerts in Yellow Springs. So, it will be refreshing to get some diversity and a more urban culture in town.”

Walker added that this will be the first time he will perform his song “Overtime,” which he released two years ago, live with Talib Kweli who collaborated on the song. Village Fam will also be performing with Lauren Nicole who was featured on their 2017 single “What it’s Like,” as well as Garden Goddess.

“I hope everybody comes out because it is going to be a very special show,” he said.

Talib Kweli is a Brooklyn-based MC who is known internationally for his work as a solo artist as well as for his many collaborations with artists like Kanye West, Pharrell Williams, and Mos Def, who was his partner in the hip-hop duo Black Star.

The event was organized by Vanarsdale as part of an independent study project at Antioch University for which he will receive college credit. The focus of the project was to “look historically at student-led events, management, and production and to create a new tradition that would supersede them in size and impact,” according to Vanarsdale.

“The college will very frequently support students’ real-world projects,” said James Lippincott, director of external relations at Antioch College, adding that college administrators had worked with Vanarsdale to help with some of the event planning.

The Antioch Creative Collective was founded by Marcell Vanarsdale and fellow student Timothy Grant in late 2017. The group’s goal is to communicate and connect with the community through digital storytelling, event coordination, and promotional content, according to Vanarsdale.

“We want to create a platform for Antioch students to impart our values on the people of Yellow Springs,” said Vanarsdale, who also expressed a desire to re-establish a culture of musical talent at Antioch and to build on past traditions.

The ACC was the group responsible for organizing The Union Party, a concert that took place on March 9 of this year at the Antioch Foundry Theater. That event also featured Village Fam and Speaking Suns.

“The college is really excited that [Music on Main] is being held on Street Fair night and to be able share in this community event,” Lippincott said.

Proceeds from the event will go into an operational fund to help continue the event at future Street Fairs, which the ACC hopes will become a biannual tradition. However, some of the proceeds will also be given back to the college to help pay for this year’s commencement, according to Vanarsdale.

The writer is an Ohio University student and intern at the News.