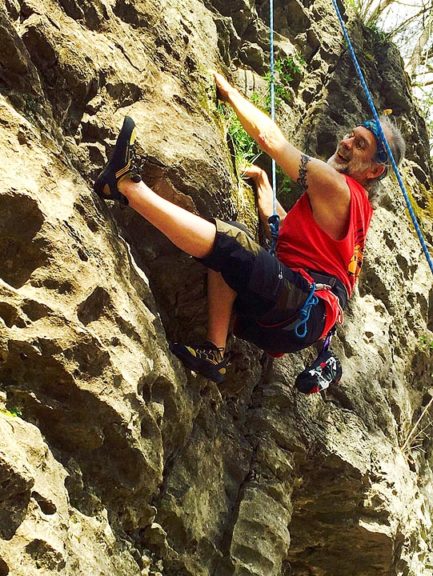 Villager Jeff “Pan” Reich has enjoyed rock climbing for 50 years, starting at John Bryan Park when he was 13. He and his wife, Jane Hockensmith-Reich, regularly climb at a downtown Dayton climbing gym and the Red River Gorge in Kentucky. (Submitted photo)

At the age of 13, Jeff (Pan) Reich started rock climbing. He’d climb the limestone walls of John Bryan State Park with his older cousins. A new climber, muscling his way up the ascent with the Little Miami River behind him, and a cousin below, belaying the rope meant to prevent Reich falling to the ground.

Nearly 50 years later, Reich climbs rock faces with the seemingly effortless dancing meditative flow of an experienced climber. He and his wife, Jane Hockensmith-Reich, both now in their 60s, regularly join their close-knit group of climbing friends for training nights at a downtown Dayton climbing gym, and fun-filled weekends at Red River Gorge near Lexington, Ky.

“I think it’s one of the most democratic sports, because almost anyone can do it,” said Reich.

Rock climbing helps people overcome their fears, and helps to alleviate self-esteem issues according to Reich. It’s a sport with infinite room for growth, where athletes progress at their own pace.

“It’s an incredible physical workout. I can’t think of a better core exercise, and it’s a full body workout. And mind. It helps people overcome self esteem issues and comes with a supportive community,” said Reich. “Plus it’s a skill that not everyone has, so there’s a lot of knowledge to share with new climbers.”

For Jane, it’s the therapeutic effects of rock climbing that attract her to the sport. “It’s medititative more than anything,” said Hockensmith-Reich, “because you’re tunnel vision focused on the wall, on the task in front of you.”

When Reich was 16, he attended a 23-day Outward Bound mountaineering school in the Colorado Rockies. Since then as a registered nurse and volunteer firefighter, Reich has helped to create and train Miami Township Fire-Rescue’s rope rescue team, and the Antioch Outdoor Club.

A lot has changed in the world of rock climbing since Reich started doing it. Equipment has gotten safer, lighter and more comfortable over the years. Ceilings in the sport and its culture break constantly, as the diverse world of professional climbers push limits past what’s considered possible.

“Back then (many years ago) you took all the risk personally. Safety was completely on the climber. Now days there’s organizations, communities of climbers who maintain routes and pins, and host online forums for fellow climbers,” said Reich.

An area climbers organization called Ohio Climber’s Coalition is one such group Reich refers to. The Coalition works to open access to climbing areas through land conservation efforts, and maintains the areas for the safety of Ohio climbers.

Ohio Climber’s Coalition led in the May, 2017, opening of Mad River Gorge and Nature Preserve in Springfield. They led a volunteer effort to clean the area, which had previously been used as a dumping ground, of its old tires and garbage. Partnered with Clark County Park District, the group of rock climbers is working to expand the park into what will become the largest climbing area in Ohio.

The routes at Mad River Gorge climbing are all lead climb routes, meaning that you begin with your rope on the ground, and clip the rope into anchors as you move up the rock face. Lead climbing takes experience and know-how. A lead climber can help his or her less experienced friends by establishing a top rope.

In contrast, all routes at John Bryan State Park are top rope routes. Climbers establish an anchor at the top of the gorge using existing bolts. They then drop their rope down the rock face, and either rappel down or walk around to the gorge bottom.

Climbers then tie their rope to their climber’s harness using a figure-eight follow through and a safety knot, while their belayer secures the other end with an ATC or Grigri attached to their own harness. The climber and belayer check each other for safety, and when ready, start the accent as a two-person team.

New climbers tend to favor their upper body strength, huffing and puffing, straining to drag themselves up the rock. Balance is a friend to climbers, rookies realize as they grow to understand the importance of hand and foot placement.

Climbing as a hobby usually begins with an obvious or subconscious fear of heights, anxiety of failure or embarrassment, and sore muscles, previously unused and tortured by inefficient technique. But in rock climbing you’re always reaching to grasp the next step, both practically and metaphorically.

Climbing starts as a workout. An exhausting routine, building strength of muscles and ligaments in the hands, forearms, shoulders and core. It becomes a puzzle as the climber grows stronger and more capable. The puzzle is in planning each move as it appears, conquering each obstacle piece by piece.

“It’s one of the best ways I know of to meditate,” she said. “There’s no past, no future on your mind. It’s just you and the wall.”

Moore, who started rock climbing in 2001, said that she’s been climbing things for the challenge of it since she was a kid. Moore plunged herself into the sport at the Urban Krag Gym in Dayton. There she trained and learned, and was certified to lead climb and belay.

Moore admits that her career at Antioch Wellness Center has forced a hiatus in her climbing. Still, she passes her knowledge of the sport down to students involved in the Antioch Outdoor Club, for which she serves as staff advisor.

Antioch Outdoor Club helps students to take up outdoor activities, climbing included. They pack into their club van and travel the short distance to Wright State University’s climbing gym, or to Mad River Gorge in Springfield, or the more distant Red River Gorge.

Red River Gorge (the Red) is nationally recognized as one of the best places to climb east of the Mississippi River. Climbers from across the country flock there to enjoy the mix of sport and traditional climbing routes.

Traditional climbing entails carrying and placing your own temporary anchors as you lead the ascent, instead of utilizing bolts drilled into the rock.

Groups of climbers who’ve met at the Urban Krag Gym, Wright State’s climbing gym, online climbing forums or through the Ohio Climber’s Coalition plan and make trips to the Red as often as they can. In Reich’s opinion, the climbing community is among the most friendly and encouraging sporting communities around.

“People in the (rock climbing) community tend to be generous and helpful,” said Reich. “It’s tough to find a more kind group of people.”

*The writer is a former News intern.