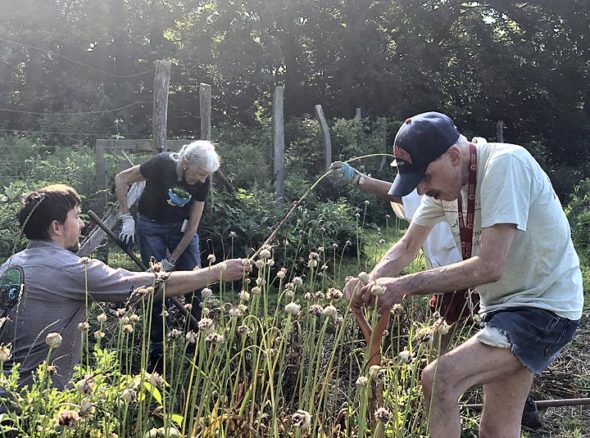 This dream today embattled,
With its back against the wall —
To save the dream for one
It must be saved for all.
— Langston Hughes

Evoking Langston Hughes, law professor and race law expert Michael Higginbotham is concerned about the direction of the country.

The dream of a post-racial society, he says, is at risk — witness the threat to voting rights, the separation of families at the border and the embrace of white supremacists in Charlottesville by the president of the United States.

Higginbotham, however, remains undeterred in his efforts to achieve racial equality. Having literally written the book on race law, he acknowledges that fighting racism in America must go beyond the legal system, and, as Hughes says, it must include everyone.

“Even though the laws have changed, many people still think with a Jim Crow mentality,” Higginbotham said in a recent phone interview. “We’ve made a lot of progress but we also have a long way to go.”

“There’s a role for everyone to play and it’s very important for whites to stand up against racism,” Higginbotham added.

“Saving the Dream for All” is the working title of Higginbotham’s talk at this weekend’s Antioch College Reunion. The free lecture takes place at 3 p.m. Friday, July 13, in the South Gym at the Wellness Center.

The talk is one of several events Yellow Springers are invited to attend at this year’s reunion.  The others are an opening reception for “Drank the Water,” at 7:30 p.m. on Thursday, July 12,  at the Herndon Gallery; a commemoration of the 50th anniversary of the Afro-American Studies Institute at 10 a.m. on Friday, July  13, in McGregor 113, and a panel discussion on the town-gown relationship at 5 p.m. on Saturday, July 14, also in McGregor 113.

In addition, the State of the College address by President Tom Manley takes place at 12:15 p.m. Saturday, July 14, in the South Gym.

David Scott, a college alum, alumni board member and villager, said this year the reunion committee wanted to reach out to villagers to encourage their participation. It’s a mutually beneficial proposition, he said.

“We want the townies here, and they want to know what’s happening and how to help,” Scott said of reunion, which he estimated will bring more than 300 alumni to campus this year.

Synergy is the word that Scott uses to describe the relationship between Antioch and the village. To him, if the economic engines of the town’s past — YSI, Morris Bean, Vernay — were all started at the college, then why can’t Antioch spark the next generation of local industry too?

“We have to figure out a way to produce economic engines that help the town and finance the college,” he said.

“The new economic engines are starting in the basement of the science and the art buildings,” Scott added. “Maybe now it’s an app.”

Many college towns talk of town-gown friction, but in Yellow Springs, it’s town-gown collaboration, added Scott, a 1972 graduate of the college and the son of two Antioch grads. That’s why Scott pushed for a session at this year’s reunion focused on that alliance.

Several joint efforts are already in the works. Plans for a business incubator on campus are moving forward. The Antioch College Village hopes to break ground in the fall on an eight-unit pilot neighborhood. A new partnership with Agraria regenerative agriculture center has been forged. The Wellness Center is popular.

Still, there may be room for improvement, according to Scott. The college, he believes, can keep villagers better informed of what’s happening on campus. And villagers, who he says have supported the college intensely since reopening, can stay positive about the college’s future.

“People in town keep saying, ‘The college is failing,’ but if you keep saying that it’s a self-fulfilling prophesy,” Scott said.

Another recent clash was resistance by some neighbors to the college’s plans for a solar array on the golf course back in 2014, according to Scott. Managing such conflict will be important to the future of the town-gown bond, he added.

According to the college, about 200 Antioch alumni currently live in the village. The shared history of both entities is long — the college was founded just four years before the Village was incorporated. Fates entwined, the future of college and village both brim with possibility, and ecological resilience may be the logical nexus of their collaborations, according to Scott.

“Antioch has always had a mandate to do what is needed and now social activism has broadened to sustainability,” he said. “I’m excited about a town and college in harmony.”

The lecture titles from the Afro-American Studies Institute, or AASI, a student-run college-within-a-college founded at Antioch in 1968, offer a glimpse into the short-lived program’s revolutionary curriculum.

Excerpts from some of the lectures, recently digitized from the original reel-to-reel tapes, will be aired at a commemoration of the AASI at Reunion. The event is 10 a.m. Friday, July 13, in McGregor 113. It also includes a panel discussion with four alumni who participated in the institute and graduated from Antioch in the early 1970s.

Antioch professor Kevin McGruder, currently the college’s only black faculty member, will also speak on the panel, having assisted with the digitization project, a collaboration with the 365 Project.

Addressing the AASI’s significance, McGruder said that in addition to classes taught by black faculty and a dormitory, the institute also owned a bookstore, gas station and several houses, among other efforts.

“It’s a much bigger initiative that’s not really well known beyond those who were participants,” McGruder said.

Another highlight of the program, part of the larger black student movement of that time, was the involvement of major figures such as Cecil Taylor and LeRoi Jones, McGruder said.

A product of black and Latino student advocacy, the AASI used college funds to hire instructors and develop a curriculum, according to McGruder. But the project quickly became controversial on campus. One college board member resigned, and a student concerned that it excluded students who weren’t black reported a possible civil rights violation to the U.S. Department of Health, Education, and Welfare.

While alums may revel in the program’s fascinating history, the panel may also be inspiring for current students, who have been involved in their own advocacy for institutional changes to address diversity and inclusion on campus, according to McGruder. Those efforts have been somewhat fruitful with the formation of a new VP position, McGruder added, which might take some of the burden off current students. But challenges persist.

“The institutional racism that caused those students to want those things in 1968 has not been dismantled — they are still in place,” McGruder said. “There is still need.”

It was easy for Michael Higginbotham to accept an invitation to speak at the inaugural A. Leon Higginbotham Jr. lecture, he said, since the two Higginbothams worked closely for years.

“I’m the person who knows his work better than anyone that is still living,” Higginbotham said.

Leon Higginbotham Jr. mentored Michael Higginbotham beginning when he was a high schooler aspiring to go into law. Together they worked on books and taught college courses before the elder Higginbotham died in 1998.

Leon Higginbotham Jr. entered Antioch the same year as Coretta Scott King. He went on to become the nation’s first black federal commissioner and was appointed as a federal district court judge and, later, a federal appeals court judge. He also served on the U.S. Commission on Civil Rights, taught at Harvard, Yale and elsewhere and wrote several books on race law. For many years, he chaired the NAACP chapter in Philadelphia, having got his start as the president of the Antioch chapter while a student.

Higginbotham sees his mentor’s efforts on the bench and in the classroom as springing from a lifelong commitment to racial justice and racial equality.

“He was a survivor of Jim Crow segregation and he worked throughout his life to make things around him better,” Higginbotham said.

Following in the footsteps of his relative, Higginbotham is now a professor at the University of Baltimore School of Law and author of  “Ghosts of Jim Crow” and “Race Law: Cases, Commentary and Questions.”

In his first visit to Yellow Springs (or Southwest Ohio for that matter), Higginbotham says there is much to talk about on the topic of civil rights and the enduring struggle to end racism.

Higginbotham believes it is important to recognize the progress that has been made, especially when it comes to changes in the law. But vigilance is necessary as the country seems to be slipping backwards when it comes to race relations, he said.

“We’ve made tremendous progress but we’ve got a ways to go. We’re not in a post-racial society yet,” Higginbotham said. “I have a great deal of concern that we’re perhaps going backwards — we’re turning back the clock.”

While it is true that legal segregation has been outlawed, the effects of segregation are still present, affecting the economic and educational opportunities of African Americans, Higginbotham explained. For example, the wealth gap between white families and black families is now 18:1, and many schools and neighborhoods are as segregated today as during Jim Crow, he said.

“We’ve changed many of the laws that embrace racial superiority, but we have been influenced by the history and the laws,” Higginbotham said.

Still, Higginbotham is optimistic that the “dream can be achieved,” he said. But first, he said, we must acknowledge that there’s a problem.

“Leon would always say, ‘The eye cannot see what the mind does not comprehend,’” Higginbotham said.

For a full schedule of Reunion events, visit https://alumni.antiochcollege.edu.