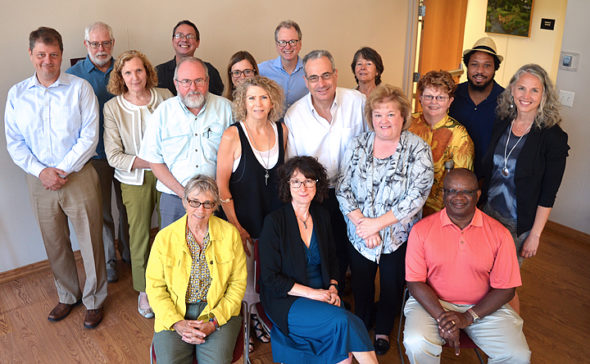 Plans for investing in the village

A local debit card with rewards for shopping locally. A business incubator on the Antioch campus. Crowdfunding for local businesses. Student debt refinancing for those who live here after graduation.

These ideas and more were explored in a series of conversations last week spearheaded by the Yellow Springs Federal Credit Union, or YSFCU.

The credit union hosted a visit from Michael Shuman, a community economics expert from Washington, D.C., who met with some 13 local groups over three days. During that time about 40 representatives from local government, nonprofits, foundations, K–12 schools, higher education and business brainstormed ways to strengthen the local economy and funnel investment money here.

Sandy Hollenberg, CEO of YSFCU, said at the conclusion of the meetings that the credit union learned more about the needs of local institutions and how it could help them “get from visions to implementation.”

“The credit union could be a piece to help these groups get to their goals and complete their projects,” Hollenberg said.

In the end, nine promising projects emerged from the sessions, according to Shuman. They included local debit and loyalty cards, an expanded land trust, a business incubator, the college “as incubator,” a municipal fiber company, a nonprofit center, a new public school and a local scholarship fund.

Shuman said he was encouraged by the conversations already happening here.

“It was impressive seeing that level of thinking from a small community,” Shuman said.

For Antioch College President Tom Manley, the experience with Shuman helped him see more clearly how the college’s plan for a business incubator on campus fits with both its educational mission and desire for more town-gown collaboration. That project is now gaining steam.

“It’s no longer just a nascent idea — I think we have a sound framework now,” Manley said in a later interview.

Currently, Antioch is exploring the re-purposing of an unused space on campus for an “entrepreneurship lab,” which would bring together business opportunities in “areas of practice” such as democracy, wellness, storytelling and sustainability.

“There would be a lab that would provide  entrepreneurial support and training and ongoing resources,” Manley explained.

Antioch’s business incubator is one of the “pollinator projects” Shuman identified locally that could support local economic development. While many could eventually break even, they all require an initial investment, Shuman emphasized after the meeting.

One way to fund the possible projects is through crowdfunding, according to Shuman. For example, a local crowdfunding portal could be set up to pool local investors’ money and support existing businesses’ efforts to raise money. The model is unlike the online services such Kickstarter or GoFundMe, which are based upon donations and usually involve hypothetical businesses.

“This isn’t donation crowdfunding — you work with a business and their business plan,” Shuman said.

Another participant, Jeannamarie Cox, director of the Yellow Springs Community Foundation, said that the sessions reiterated the need for bringing in outside money to support local projects. In the area of local investment, while the Community Foundation mainly gives grants, it has started making “impact investment loans” in the community and plans to expand on its first two successful ventures.

Cox added that working in collaboration with other local groups has been key and that local investing has a host of benefits.

“It’s our community, it’s where we live and it makes it better for everybody,” Cox said of investing locally.

Shuman’s visit, his fourth to Yellow Springs since 2005, was funded by a $6,000 grant that YSFCU received from the Ohio Credit Union Foundation. The grant requires that “baby steps” are taken towards one of the nine local investment projects discussed at the sessions, according to Hollenberg. That project will be chosen soon, she added.

The work with Shuman is the latest effort of the credit union in its goal to invest more in the local community, according to Hollenberg. YSFCU is looking to add more members from the community (currently they have 1,800 local members) and to expand its offerings in support of Yellow Springs.

For example, last year YSFCU helped local nonprofit Community Solutions purchase the land for its Agraria regenerative agriculture center by extending them a line of credit based upon the pledges of four investors.

In addition, last year the credit union earned Community Development Financial Institution certification, which allows it to apply for grant money that could be used to provide access to affordable financial products and services for underserved communities and populations. The credit union cannot currently make conventional business loans, according to Hollenberg.

Founded in 1948, YSFCU is a nonprofit cooperative credit union owned and operated by its members with about $20 million in assets.

One Response to “Plans for investing in the village”