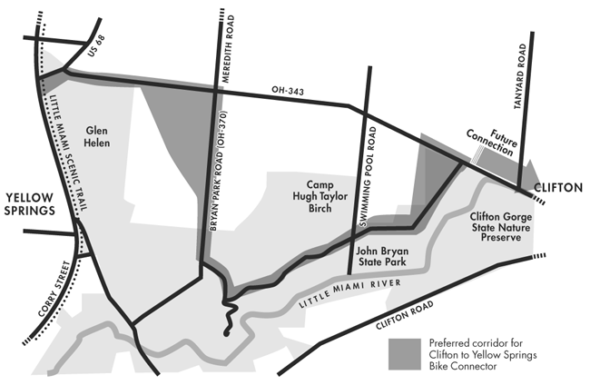 A long-envisioned bike path connecting the villages of Yellow Springs and Clifton shifted up a gear recently.

A feasibility study is now underway to lay out a possible route, estimate costs and provide design criteria for the bike path between the villages, which are less than four miles apart.

Currently, the road that connects both towns — State Route 343 — can be treacherous to travel by bike or foot with its narrow shoulders, high speed limits and hills and curves, according to those heading the project.

The preferred route of the YS–Clifton Connector Trail would take cyclists, pedestrians and users of other non-motorized devices from downtown Yellow Springs up U.S. 68, then parallel to State Route 343, down State Route 370 through John Bryan State Park and around Clifton Gorge State Nature Preserve and end at the gorge’s parking lot on State Route 343.

The multi-use path is seen as a way to not only make travel between the two towns more family-friendly, accessible and possible without motorized means, it would help residents of both town access area nature preserves.

“We have the opportunity to make it a beautiful and scenic trail, not just a straight shot along a highway,” said Clifton Mayor Alex Bieri, who is paving the way for the path along with Yellow Springs Council President Brian Housh and Miami Township Trustee Chris Mucher.

Those working on the bike trail will be available to speak to community members and answer questions at a booth at this weekend’s Clifton Arts and Music Festival, Aug. 24–25 (see schedule on page 2). They will also have a booth at Yellow Springs Street Fair on Oct. 13.

The latest effort began about a year ago as a collaboration between the villages, Miami Township and various county and state agencies. Although the bike path has been discussed for nearly 40 years, the commitment of funds for the project marks a significant step forward, Bieri said.

“This is the first time in history we’ve had money,” Bieri said. Additionally “the fact that all of these groups are in dialogue— to me that is exciting,” he said.

The Ohio Department of Transportation, the Ohio Department of Natural Resources, Greene County Parks and Trails, the Tecumseh Land Trust and the Glen Helen Ecology Institute have also been supportive of the concept in recent conversations, and last week area landowners received a letter in the mail informing them of the project, according to Mucher.

Ultimately, funding for the trail may cost in the range of $1 million per mile, with the current plan for a trail slightly more than three miles in length, according to Housh, who is also the Midway Policy Manager for the national Rails-to-Trails Conservancy.

Federal and state grants will be sought for the project, including the Clean Ohio Trails Fund, according to Housh. Additional support is expected from Greene County Parks and Trails, which has money from a levy to support trail development and maintenance. The major costs are for engineering and to pave the trail with either asphalt or crushed limestone, Housh said.

Compared to the process of turning abandoned railroads into multi-use trails, which gained steam in the 1980s and ’90s, new “greenway” bike paths are far more complicated, Housh added. But if opposition to the preferred path does materialize, there are many alternative routes in the area. Overall, he believes the logistical and cost barriers are surmountable.

“I think it’s something that the majority of people really want,” Housh said.

The section of the Little Miami Bike Trail that travels through Yellow Springs opened in 1991 after both local support and some opposition, but is now widely used for transportation and recreation.

Bieri said he hopes property owners along the route with concerns also see the benefits of the proposed trail. Specifically, the trail will “give people access to areas they want to explore,” Bieri said.

According to a handout sent to area landowners, studies have shown that proximity to a trail increases property values, and that property owners would be compensated for any land or right-of-way acquisition. In addition, neighborhood safety is increased by bike trails and there are ways privacy can be preserved using fencing and natural barriers, according to the handout.

Current plans call for a dedicated pathway near the current State Route 343, and not an additional lane on the road, which cannot be widened without significant expense and effort, according to Bieri. The road, once a mule trail to transport products from Clifton’s mills to the Little Miami Railroad in Yellow Springs, was long ago grandfathered in at its current width, which is narrower than state regulations now allow, Bieri added.

But cyclists shouldn’t gear up for the ride just yet, as the path could take anywhere from two to five years to complete, he said.

“We are in the early phases of planning,” Bieri said.

Still, the idea is exciting to Bieri, a former villager who in 2006 moved with his family to Clifton, a tiny hamlet of 150 people. Although always connected, the nearby villages could grow even closer with the new bike path, Bieri believes. And residents of both will have greater access to the natural beauty of the Little Miami River that runs between them.

“To me, this increases quality of life,” Bieri said. “It will connect the two villages and it also connects this corridor of experience around the river.”