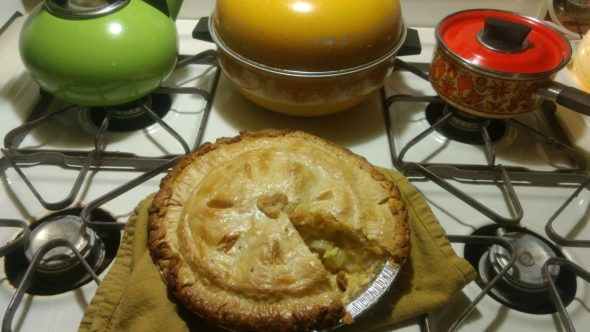 A savory — and soporific — potato pie.

Potato pie-in-the-sky, down to earth

When I first met my husband Anthony, I thought he was the coolest dude. I realize that writing that sentence the way I just did presumes otherwise, but stay with me. He was a poet; he was hilarious and wore this really great brown corduroy blazer all the time. He was vegetarian.

Eventually, I moved from Lexington to Yellow Springs to live with this cool dude full time. Anthony had just started a new semester of teaching, and I was fresh in this new village without a job. I spent many of my first days living in YS at the library, using the internet there to look for work and trying to figure out how to fit my stuff, my sense of aesthetics and myself into a home that already belonged to somebody. I was setting up house with a partner for the first time in my life. Nothing was particularly familiar, and the last time I’d shared a room with someone I’d been 11 years old and my sister and I had bunkbeds.

Those first few weeks I couldn’t sleep, so I’d get out of bed around 5:30 a.m., pop in my earbuds and walk around Yellow Springs. Invariably I’d wind up at Antioch College, which at that time was still dormant. In that hour just before the sun came up, the place looked straight out of a gothic novel: high towers rising out of the fog, deer bending in my periphery among the overgrown brush. The whole thing was emblematic to me — because writers are always looking for thematic symbolism, even in their morning walks — of the mystery, the thrill and the discord of starting a new life.

During my library visits, when I wasn’t searching for work or deciding how to redecorate the extra bedroom, I perused the collection of vegetarian cookbooks. I had decided that I, too, would be a very cool vegetarian — I’m no longer vegetarian, by the way, nor cool. I wanted to put together a cookbook for our new shared home of exciting things we would eat together, hopefully for the rest of our long lives. It was an ambitious collection made by a person who had catered only to her own tastes for the last several years, and included lots of rich roulades and frittatas. Also included, perhaps because I know myself and my limitations, was a simple recipe for a homey-sounding potato pie.

The ambitious recipes I gathered at the library years ago are there, too, as a reminder of the fact that a person’s culinary taste is just one of the things you’ll learn about them when you live with them, and that your own tastes will change, not unlike everything else in the world.

My husband is still cool, it turns out — but he is a “husband,” which is different than “new, live-in lover.” That’s just how things work; his coolness is still part of why I love him, but it’s no longer surprising or novel. Neither is my bed; neither is my house; neither is Yellow Springs.

Nevertheless, I crave all of these things when I’m away from them. Sometimes I wonder — because writers are always looking for thematic symbolism, even in tater dishes — if I threw that exceedingly comfortable potato pie into the mix because I was looking forward to the promise of family and home.

More likely, though, it was because the recipe includes potatoes and cheese and butter and cream, and hot dang if those aren’t my four food groups.

Two frozen pie crusts (or homemade, if you think you can do better than the Dough Boy himself)
4–5 large potatoes
1 large onion, chopped
1 cup heavy cream
2 cups cheddar cheese
half-stick of butter
parsley
salt and pepper


Directions: Pre-heat oven to 375 degrees. Peel potatoes; for best results, pop them in the microwave for a few minutes, because potatoes take years to cook in the oven. You could always boil them and mash them, as I’ve seen some folks do with similar recipes, but I personally find the notion repugnant. Rinse them in cold water for a bit after you take them out of the microwave so you don’t burn those digits, then slice them.

Layer potatoes, onions and cheese in your bottom pie crust until it’s all a giant, heaping mound. Sprinkle parsley, salt and pepper on the mound, and place pats of butter on top. Pour the cream on top, and feel yourself getting sleepy already, which is how you’ll feel after eating this dish. Cover with top crust and cut some vents in there. Put the whole thing on a cookie sheet, because this thing will absolutely bubble over. Cook for 45 minutes, or until potatoes are soft to your taste. Serve with something like Brussels sprouts so you feel better about the whole thing.

This column originally appeared in the Aug. 23 issue of the News.

One Response to “Potato pie-in-the-sky, down to earth”