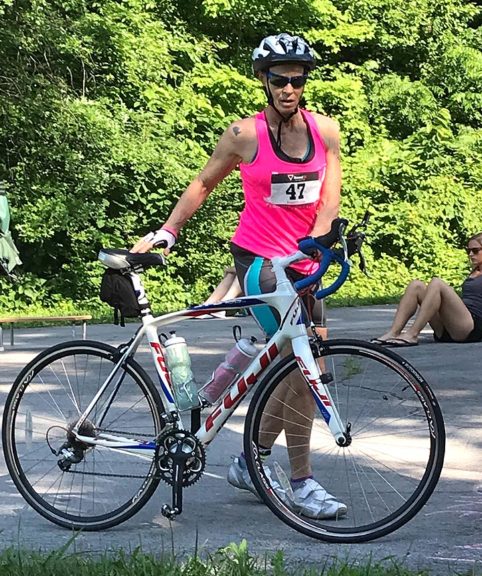 Villager Diana Castellano, pictured here in a recent race, has qualified to compete in multiple biking and swimming events as well as the triathlon competition at the 2019 National Senior Games, popularly called the Senior Olympics, to be held in June in Albuquerque, N.M. Longtime Yellow Springs resident Cheryl Meyer, not pictured, qualified to compete in four swimming events. Both women swim with the Dayton Sharks team. (submitted photo)

Senior athletes: They did it

They did not begin competitive training as children nor devote their teenage years to sharpening their sporting skills.

Castellano is a registered nurse, working in wound care at Springfield Regional Hospital, and Meyer is an academic, currently the associate dean at Wright State University’s school of graduate psychology.

But Olympians they are.
Both women have qualified to compete in the National Senior Games, commonly referred to as the Senior Olympics, to be held next summer in Albuquerque, N.M.

The preliminary swimming events were held during the Ohio games hosted in Westerville in June. There, Castellano qualified for six national events — the 100 and 200 breast, the 50 and 100 butterfly and the 100 and 200 individual medley. Meyer stuck to freestyle, earning a place in the 50, 100, 200 and 500 races.

The biking qualifier took place during a regional competition in Portsmouth. Castellano placed in all three possible races — the 5K, 10K and 20K.

While a spot at the national competition generally requires finishing fourth or better in an individual event, just competing in a nationally sanctioned triathlon earns competitors a spot in the national games. Castellano claimed her national spot in June at Springfield’s Buck Creek.

Competing seriously for the past five years, and qualifying for the last two national games held in odd-numbered years, Castellano said that each competition is an emotional experience for her.

The physical ability to participate was unthinkable 11 years ago, when she suffered with reactive arthritis following a bout with salmonella.

“I was very sick,” Catellano said. “I became very debilitated. I couldn’t walk around the block.” Movement caused great pain.

But she was determined to get better.

“I did everything I could to recover. I went to a [physical] therapist. I changed my diet.”

While swimming laps at the YMCA in Wilmington, where she lived at the time, an instructor there suggest she consider entering a sprint triathlon, in which the distances covered in the races is less than typical triathlons.

Participating in such an event was the furthest thing from Castellano’s mind.

“I really didn’t think about doing anything like that,” she recalled. “I was just trying to keep moving.”

The instructor gave her a card with the name of a trainer, but Castellano dismissed the idea, dropping the card on a shelf when she got home.

Months later, while cleaning house, she came across the card again and thought, “I’ll just call her and see what she says.”

“She just raved about these events, and she had all these suggestions and encouragement,” Castellano recalled.

Castellano entered her first sprint triathlon in 2010 at Deer Creek.

“It was all women, and everyone was so encouraging and so supportive.”

And her life as a competitive athlete began.

Eight years and multiple events later, Castellano remains grateful for every experience.
“Every time I do one is a gift,” she said. “I could be in a whole different situation.” The pain that stymied a simple walk around the block has been reduced to a little discomfort in her neck and left wrist, depending on the weather.

She still sees a physical therapist once a month, and she adheres to a healthy diet, which she credits with helping maintain her fitness.

Cheryl Meyer said she has always had an interest in sports, but she was never much of a competitor. She taught herself to swim from a book when she was in her 20s, and she participated in her first triathlon about the same time. But she put organized athletics aside after she started a family and began building her career. She pursued her love of the water vicariously as her two daughters participated in the Yellow Springs summer Sea Dogs team and later in the high school swim program.

Meyer got back in the pool herself about four years ago, joining an adult team in Dayton, the Sharks, headed by villager Franklin Halley.

Castellano also swims with the group, and that’s where the two women met.

Meyers said the two of them are unique on the team in that neither swam competitively in high school or college. Most swimmers with the Dayton Sharks aged out of younger levels of competition, “but still wanted to compete,” she said.

The season runs September to May, with practice sessions held two mornings — Tuesdays and Thursdays — and two evenings — Mondays and Wednesdays — each week at the Antioch gym.
Meyer’s first meet with the Sharks was this past December. The senior Olympics qualifier in June was only the second time she’d competed.

She called on her daughters, Rachel and Sara, to help teach her how to dive correctly off the blocks at the beginning of a race, a skill she had never mastered.

Meyer said that one of the benefits of being new to competition is that as she develops better technique, her finish times improve, while other older athletes, who have been competing since their youth, see their times decrease with age.

In addition to their weekly swim sessions, the women stay active in a variety of ways.
“Every day, I have to do some exercise,” Castellano said, noting that she had ridden her bike 12-and-a-half miles earlier that morning.

Meyer rides her bike to work at Wright State as often as she has time.

“I work out every day, but I don’t really focus on things like biking and running,” Meyer said. “I absolutely loathe running. I feel pretty good when I finish, but I loathe everything about it. I’ll do it just to get through a triathlon.”

Meyer said the idea of trying out for the senior Olympics had been growing in her mind for about a decade, inspired by an article she read in People magazine.

The feature story included a picture of a 90-year-old woman, who had just finished a swim meet, looking up at her time.

The article, which Meyer mounted on her office wall, also showed a 100-year-old woman “swinging around a shot put.”

“There’s some amazing stories,” Castellano said, describing having personally witnessed a woman in her late 70s recovering from a broken hip. “She came up in a walker, someone helps her in the water and she swims a 50 [meter event].”

She said her winning strategy is to pick the longer and more difficult events, where fewer people compete.

“I don’t have great amounts of energy,” she said. “I just keep going.”

Meyer said a rotator cuff injury has left her with limited mobility in her left shoulder, so she “can’t do any other strokes, except freestyle.”

For both women, participation isn’t about what they can’t do, but rather what they can. Meyer recalled participating in a triathlon in which she finished 119 out of 120 athletes.
It’s the doing that matters, she said.

“I focus on two things: finish, don’t hurt yourself.”

And they both have found that qualifying as Olympians has given them a certain social cache.

“Everybody loves this,” Meyer said.

Castellano concurred, laughing at the memory of a colleague telling her: “I didn’t know you were such a bad-ass chick.”

Meyer noted that she’s written four books, among other career highlights, “and none of those things impressed people like this.”

She was particularly touched by a student who, upon hearing of Meyer’s achievement, simply said: “You did it.”

“That is such a good thing to say,” Meyer concluded.