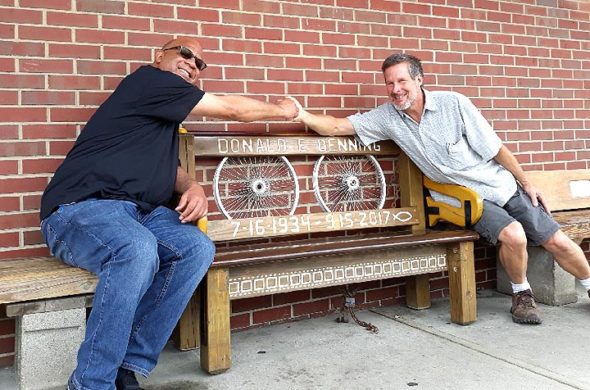 A memorial bench for village resident Don Benning, who died last year, is in place in front of Tom’s Market, thanks to the efforts of lifelong family friend Shelly Blackman, left, who commissioned locally based artisan Bruce Parker, right, to create the bench that reflects Benning’s multiple interests. (photo by Carol Simmons) 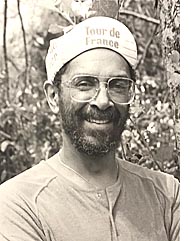 Nearly a year has gone by since the death last September of longtime villager Donald E. Benning at the age of 83.

Affectionately known to his many friends and family as “Donny Boy,” Benning could frequently be found downtown in the later years of his life, sitting and visiting with folks, usually on a bench in front of the grocery store.

“One of the favorite past times for Don was sitting on a bench in front of Tom’s [Market],” lifelong family friend Shelly Blackman recalled recently.

And Benning’s presence there has been keenly missed this past year.

But recently, a new, handcrafted bench honoring Benning and his life has appeared in the spot he so often occupied.

Initiated by Blackman and created by local artisan Bruce Parker, the unique bench incorporates representations of many of Benning’s varied interests.

A pair of actual bicycle wheels form the bench’s back rest, attesting to his interest in biking; billiard balls affixed atop the rear support posts and a pool cue stick across the top of the back speak to his affinity for the game; an engraving of a strip of film along the bench’s bottom tells of his passion for photography; and arm rests carved to suggest saxophones refer to his love of jazz. What’s more, the various woods that went into the finished piece remind observers — and sitters — of Benning’s joy in the outdoors.

A member of Central Chapel A.M.E. Church, Benning graduated from Bryan High School in 1953. He served in the U.S. Air Force and worked at Antioch College, the Montgomery County Health Department, the Transportation Security Administration and briefly as a professional photographer, according to his obituary.

Blackman, a local real estate agent whose family history in Yellow Springs, like the Bennings’, goes back to the mid-1800s, said that during a gathering of friends and family after Don Benning’s death, Blackman’s mother, Harriet, suggested putting a plaque in front of Tom’s to commemorate Benning’s frequent presence there. Blackman, who went to high school with artisan Parker and knew of his wood work, suggested commissioning a new bench that could be placed in Benning’s old spot.

A number of Benning’s loved ones expressed willingness to contribute financially, and Parker agreed to create the finished bench.

Blackman said that the reaction from extended family members, including son Duncan Benning, who now lives with his wife and two children in Tucson, Ariz., was: “What a lovely, lovely bench.”

Blackman said Benning’s eldest brother, Charles Benning, currently resides in a nursing home in Enon. Charles is the only surviving sibling of seven children born to Chester and Helen Benning. Don was the youngest.

There are plans in the works, Blackman said, to bring Charles into town to see his brother’s bench now that it is in place.

Parker, who has a studio on Fairfield Pike near East Enon Road, prefers to use reclaimed and found wood. The seat for Don Benning’s bench came from a former church pew.

The rest of the bench is made of various woods found in different locations.

A builder and contractor for many years, Parker said he’s wanted to be an artist since middle school, and is happy to be pursuing that interest now, creating both utilitarian and purely decorative pieces. Mostly self-taught as an artist, he learned to work with wood while employed by a cabinet-maker in his young adulthood.

There he developed a passion for the grains and colors of natural woods.

“I learned how beautiful it was,” he said. “It still amazes me to this day.”

Making the Benning memorial bench gave Parker a chance to combine various woods and also gave him an artistic challenge, which he enjoyed, in incorporating the different representational elements of Benning’s life.

Parker said he hopes the family and community find pleasure in the results.

Community member Flo Lorenz was happy on a recent afternoon for the chance to remember her “old friend Donny” as passersby stopped downtown and admired the newly placed bench.
“I miss him,” she said of her former co-worker at Antioch College. “He was special.”

Blackman agreed. “I loved Donny Boy and we miss him terribly,” Blackman said. “He was very private if he didn’t know you.” But he was a loyal friend once you met, he added.
Blackman said he wishes Benning could have seen — and used — his bench.

“He would have sat on that bench. I guarantee it.”