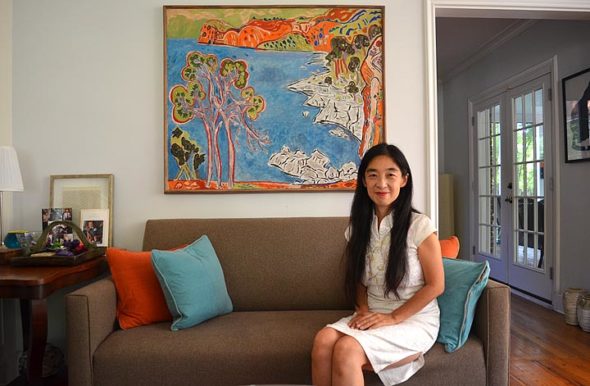 Noted Japanese composer Keiko Fujiie will present “Wilderness Mute,” a multidisciplinary work of music, image, poetry and Japanese Butoh dance, on Friday, Sept. 21, 7:30 p.m., in the Foundry Theater at Antioch College. The work is in response to the nuclear bombing of Nagasaki on Aug. 9, 1945, and is slated in conjunction with an exhibit at the Herndon Gallery looking at nuclear bombing archival materials. Fujiie is photographed in the Antioch College president’s house. (Photo by Megan Bachman)

When Japanese atomic-bomb survivor Kyoko Hayashi traveled to the Trinity  site in New Mexico, where the first atomic bomb was tested 50 years prior, she found burned mountains, ruined fields, and a “wilderness forced into silence.”

As Hayashi recounts in her poetic text, “From Trinity to Trinity,” although she was a hibakusha, literally “explosion-affected person,” as a survivor of the atomic bombing of Nagasaki on Aug. 9, 1945, she was moved to tears only after witnessing the bomb’s utter devastation of the natural world. She couldn’t even find an insect in the vast wasteland.

“Until now as I stand at the Trinity Site, I have thought it was we humans who were the first atomic bomb victims on Earth,” she wrote. “I was wrong. Here are my senior hibakusha. They are here but cannot cry or yell.”

“Wilderness Mute” by Japanese composer Keiko Fujiie derives its name from Hayashi’s empathetic encounter with the New Mexican desert. For Fujiie, a longtime resident of Nagasaki, the piece is inspired by survivors like Hayashi, who overcame their own suffering to connect with the suffering of others.

“She saw that Mother Earth was a victim before us,” Fujiie said of Hayashi.  “It touched me so much.”

A collaborative, multidisciplinary work involving music, image, poetry and Japanese Butoh dance, “Wilderness Mute” is a response to the U.S. nuclear bombing of Nagasaki. The performance, only the second one in the U.S., will be held Friday, Sept. 21, 7:30 p.m., in the Foundry Theater at Antioch College.

The piece is in conjunction with “Nuclear Fallout: The Bomb in Three Archives,” with local artist Migiwa Orimo, which opens at Antioch’s Herndon Gallery the previous evening, Thursday, Sept. 20, at 7 p.m. with a talk by Orimo.

“Wilderness Mute” is a special performance funded by the Music of Remembrance, a Seattle, Wash., project that annually commissions compositions to remember the Holocaust. For its 20th anniversary year, the group commissioned two pieces on the atomic bombings of Hiroshima and Nagasaki, selecting for one of them Fujiie, a noted and frequently performed Japanese composer.

Fujiie’s work draws from the firsthand accounts of victims of the Nagasaki bombing, unimaginable in its horror. She sees the accounts as vital to preserve.

“This atomic bombing is not possible to imagine, so before the last victim passes away, I have to share,” she said.

At the same time, Fujiie also wants her audience to see the universal nature of the problem and the present-day threat of nuclear proliferation and nuclear waste.

“We don’t want so many sentimental lamentations,” she said. “It is a tragedy,” she added of the Japanese bombings,
“but it is a tragedy everywhere.”

“We are all in the highest risk.”

In addition to the voices of the Nagasaki victims, Fujiie incorporates the poetry of Nobel laureate physicist-turned-peace activist Yukawa Hidecki. His poem deals with the mistakes made by early nuclear scientists such as himself, who, for their impressive achievements, unleashed a new terror on the world.

Through her piece, Fujiie hopes American audiences remember not only the human toll of the Japanese bombings, but also reflect on the 15,000 nuclear weapons currently stockpiled around the globe, “each more powerful than the ones dropped on Hiroshima and Nagasaki,” she said, and the legacy of nuclear waste contamination in their own country.

“Not only [those in] Japan are the victims, but in your own country so many people are suffering so much,” she said.

A reappraisal of the Japanese bombings is also on offer at “Nuclear Fallout: The Bomb in Three Archives,” with Orimo and other artists.

A Japanese-American whose art deals with erasure, memory and “storage as a kind of collective memory,” in her words, Orimo crafted her part of the exhibit as a response to several archives, rather than a straightforward presentation of the materials.

The three archives to which the title refers are the National Archives in Washington, D.C., the National Museum of the U.S. Air Force near Dayton and the Wilmington College Peace Resource Center. Each deals with America’s atomic legacy in its own way.

Two of the nearby archives offer a stunning contrast, according to Orimo. The Wilmington Peace Resource Center, the largest archive of materials related to the atomic bombings of Hiroshima and Nagasaki outside of Japan, was started by American nuclear disarmament activist Barbara Reynolds, a Quaker who lived for a time in Yellow Springs. Meanwhile, the U.S. Air Force Museum is a celebration of flight and military technology. 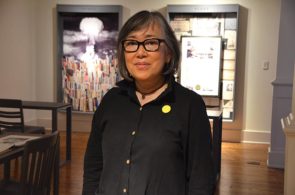 Local artist Migiwa Orimo’s work is exhibited in “Nuclear Fallout: The Bomb in Three Archives,” a new show at Antioch’s Herndon gallery that opens Thursday, Sept. 20, from 7–9 p.m. with a talk by Orimo. (Photo by Megan Bachman)

“It allowed me to see the discrepancy in how the story is being told,” she said.

At Wilmington, an impressive collection of first-hand accounts tells a people’s history of the human toll, while the Air Force Museum proudly displays the B-29 that dropped the atomic bomb on Nagasaki, with replicas of both A-bombs dropped in Japan, Little Man and Fat Boy, nearby, Orimo explained. Meanwhile, sparse information on the human impact of the bombs is displayed at the periphery, hidden in a darkened area.

Orimo’s presentation of the archives, however, literally brings light to various aspects of America’s nuclear history. Well-lit cabinets cover such topics as the U.S. government’s censorship of death and illness in Japan in the bombings’ wake and the ways American have responded to the gruesome images of burned victims — by not wanting to look. In another cabinet, cheesy postcards from popular 1950s and ’60s vacation destinations are amended with mushroom clouds in an era when rampant atmospheric testing was creating global nuclear fallout while Americans remained in denial.

Before each cabinet is a single chair behind a single table lit by a single lamp and holding a binder of “errata,” which contains Orimo’s corrections to the historical narrative.

“I wanted to bring it down to the individual’s relationship to history and information,” she said.

Orimo, who has lived in the U.S. for decades and became a naturalized U.S. citizen in 2003, said she doesn’t have a personal connection to the Japanese bombings, although her uncle, a student at a Nagasaki medical school at the time, narrowly missed becoming a victim.

Another exhibitor at the show, Japanese photographer and installation artist Kei Ito, is descended from a Hiroshima victim, his grandfather, who eventually succumbed to the effects of radiation after starting a family.

If Orimo’s exhibit brings light, Ito’s brings heat. Upon entering Herndon, the viewer is confronted by a soundscape of a B-29 bomber circling overhead and a searing image of a burning sun in a multimedia piece called “Sungazing.”

Text appears on screen, noting that “on the hottest day in Hiroshima in 1945,” one could not even quench their thirst with water, which contained high doses of radiation, killing many.

“How many times have I been in Nagasaki in the broiling sun of August 9 … at the stroke of 11:02, the sirens ring, the bells reply, and we citizens offer a silent prayer. Even with all my empathic power, I cannot imagine that August day. … We who were not present cannot possibly understand this holocaust. … There was a time when artists could foresee the future. This kind of vision is vital. We should not be incapable of our own distress. We need to look to that future, and make desperate efforts for it.”