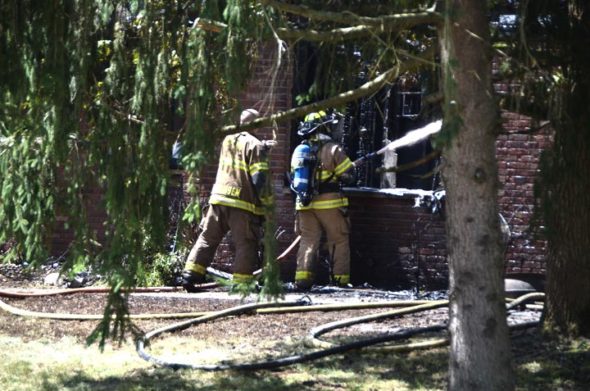 Firefighters worked to extingush a house fire at 1436 Glen View Drive on Friday, Aug. 24, that left a 26-year-old disabled man dead and his grandmother hospitalized. (Photo by Megan Bachman)

Nearly a week after a local house fire claimed the life of a Yellow Springs man and hospitalized an elder relative, fire officials continue to investigate the cause, while the community rallies around the grieving family.

The Greene County Coroner’s Officer on Monday confirmed the death of Trevor A. Nared, 26, in the Friday, Aug. 24, fire at 1436 Glen View Drive.

The exact cause of death will not be known, however, until toxicology tests are completed, in eight to 10 weeks, according to William Harden with the coroner’s office.

Nared, who has been described as disabled, lived in the Glen View Drive home with his grandmother, Barbara Coffey, and mother, Ginnifer Amey.

Coffey, the homeowner, was taken to Soin Medical Center in Beavercreek, and then by medical helicopter to Miami Valley Hospital in Dayton, for smoke inhalation, according to fire officials. She remained hospitalized Tuesday evening; her condition was not availalbe to the public.

Amey, an employee of the Village, was not at home when the fire started.

In the days following the blaze, community members have stepped in to help the family with an online GoFundMe website page (gf.me/u/ks3ynf) and a Coffey Family Fund account at Wesbanco Bank. Five percent of donations through GoFundMe go to the site. Those wishing more information about contributing to the bank fund may call 937-760-5000.

Ginnifer Amey’s co-workers with the Village are helping as well, according to Ruthe Ann Lillich, administrative assistant and human relations officer in the village manager’s office.

Amey, who moved back to Yellow Springs from Tennessee this summer after her husband died in June, was recently hired here as a water/wastewater plant operator.

“Because she has only been with us a few weeks, she has not had time to accrue paid time off, Lillich wrote in an email.

“Employees are donating our sick time hours to her in order to assure she receives full paychecks. We also have a donation envelope for employees to contribute financially to her.”

Co-workers and Village Manager Patti Bates were all on the scene Aug. 24 as fire crews battled the blaze.

“We have all been impacted by her tragedy and are pulling together as a family to support her,” Lillich wrote.

According to Miami Township Fire-Rescue Assistant Chief Denny Powell, the first of multiple 911 calls came in at 11:15 a.m. reporting a structure fire with at least one person trapped inside.

Neighbors, passersby and a group of village workers who had been on a job nearby were already on the scene when Powell arrived with two fire crew members in the chief’s car at 11:25 a.m., the assistant chief said. The three had been at the Cresco construction site, on the northwest side of the village, doing a pump test when the call came in, Powell said.

Private citizens had helped Coffey, 72, get out of the house, but the smoke was too intense to go back in to help Nared, according to witness accounts.

Powell said firefighters were met by “very heavy smoke from the structure and a lot of heavy flames coming from the front.” They were able to enter the house from the rear, but unable to rescue Nared.

The fire was mostly extinguished by 1 p.m., and declared fully “terminated and cleared” at 5:09 p.m ., Powell said.

A family dog and cat survived, but two other dogs and some chickens died, according to a relative at the scene. A pet turtle was reportedly found in the back yard several days later.

Powell said the cause of the fire has not been determined, and fire officials are seeking video or photographs of the scene to help in their continuing investigation.

Assistant fire Chief Powell echoed the tragedy’s impact on the fire crew, most of whom had never dealt with a fire-related death before.

The family has faced tragedy before. Barbara Coffey’s son (Amey’s brother), Jonathan Coffey, died in a 2005 car crash at the age of 25; and Coffey’s husband, (Amey’s father), Robert Coffey, died four years ago at 66, according to newspaper records.

Information about services for Trevor Nared was not available at press time.