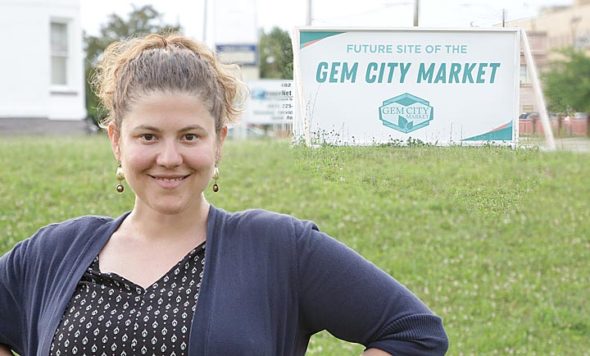 Lela Klein, who grew up in the village, is the executive director of Co-op Dayton, a nonprofit starting a cooperative grocery store in a food desert in West Dayton. Yellow Springs residents can aid the effort by becoming supporting or voting members, and by attending Co-op Fest Dayton from 5 p.m. to midnight on Friday, Oct. 19, at the Yellow Cab Tavern in Dayton. (Submitted Photo by Steve Bognar)

A co-op grocery comes to a Dayton food desert

By Elise Miller and Megan Bachman

On the corner of Salem Avenue and Superior Street in West Dayton sits a vacant building with signs advertising a former artist supply and picture framing shop. By the end of next year, this humble corner will be transformed into a co-operative grocery store selling fresh and healthy food to an underserved community.

To Lela Klein, founder and executive director of an umbrella organization that spearheaded the project, the Salem Avenue site represents an opportunity, where not only fresh food and new jobs will sprout, but an entire community will be empowered to create its own destiny.

As the first project of Co-op Dayton, the Gem City Market aims to prove the concept of worker-owned cooperatives, which meet the needs of a community while generating profits that stay locally.

“If we can create wealth, the wealth stays rooted in the community,” Klein said of the model.

Co-op Dayton, which hopes to spawn other cooperative ventures in the greater Dayton region, is throwing the first Co-op Fest Dayton on Friday, Oct. 19, from 5 p.m. to midnight, at the Yellow Cab Tavern in downtown Dayton.

The event features a food truck rally and a ticketed concert with live music, dancing and spoken word. A collaboration with other area cooperatives, including Fifth Street Brewpub and Wright-Patt Credit Union, the event aims to raise funds for its $4.3 million Gem City Market project.

“It’s a celebration of all kinds of cooperatives,” Klein said.

In the works since 2015, Gem City Market will serve a community that has been declared a “food desert,” — defined as a place vapid of fresh fruit, vegetables and healthful whole foods due largely to lack of grocery stores, farmer’s markets and other healthy food providers. Food deserts are almost always in poor communities.

Dayton is the second worst in the nation for food hardship in families with children, according to Gem City’s website. In areas where large grocery retailers no longer find a profit,  the grocery co-operative model presents a sustainable method for healthy food and fresh produce to be accessible, Klein explained.

Furthermore, the co-operative model gives both member-owners and employees a say in decision-making and a stake in the organization’s success.

“It’s a different way to think about the way we meet our needs,” Klein said. “It’s more controlled by the folks that are most impacted.”

Having grown up in Yellow Springs as the daughter of socially-conscious filmmakers Julia Reichert and Jim Klein, Klein has always been drawn to efforts in social justice. She’s now calling on the Yellow Springs community’s activism to support the Gem City Market in impoverished West Dayton.

“A supporting membership is a great way for Yellow Springs members to get involved,” Klein said. “It says, ‘I like what you’re doing, I like this model’ and it subsidizes a low-income share.”

While Klein and her husband, Bobby, have put down roots in the South Park neighborhood in Dayton after returning to the area from Washington D.C. in 2012, Klein still considers Yellow Springs home. She spent her formative years here, and visits frequently.

Not surprisingly, the fires of her activism were lit in Yellow Springs. Citing memories such as efforts to preserve greenspace and anti-pollution activism at the Cemex cement factory, Klein said it made an impression.

“Growing up in the village impacted my sense of community — that a community has to be really active in shaping its own destiny,” Klein said.

Klein moved to the village when she was eight. She attended the Antioch School, McKinney Middle School and Yellow Springs High School, as well as Carroll High School in Dayton, and worked at Ye Olde Trail Tavern and the Winds Cafe.

Klein also attended Antioch College for a year. Klein’s parents, cousin and husband are all alumni of the college. Antioch had a formative role in her activism, especially participating, as a student, in community government, she said.

“It was my first experience which emphasized such a strong sense of self-determination for community,” Klein said.

Focus on the food crisis

In 2015, Klein, then legal counsel for a national labor union headquartered in Dayton, got a call from Erica Bruton of the Miami Valley Organizing Collaborative, which was forming a committee led by West Dayton residents. They were gathering to discuss solutions to the food crisis affecting their community.

“We were just a bunch of people sitting in a conference room talking, meeting monthly. Nobody was sure it would go anywhere,” Klein said of the diverse group.

Northwest Dayton hasn’t had a full-fledged grocery store since 2007, when a Kroger closed its doors. Finding the location unprofitable, the chain went on to invest in its stores located in more affluent — and white — Dayton neighborhoods, according to Klein.

Overall the region has suffered from  “decades of divestment,” Klein said. And while there are signs of renewal, the community’s food options are still limited.

“There is some good investment happening but people still have to take a 45-minute bus ride to a supermarket or shop for groceries at Dollar General,” she said.

After several meetings around the food crisis in Dayton, the vision of a co-operative grocery market began to coalesce. Klein quit her job and became the founding director of the Greater Dayton Union Co-op Initiative, which has since been renamed Co-op Dayton. A market study focused efforts on the Salem Avenue area. A business plan was developed in 2016, and their first major grant came in 2017.

When it came down to garnering major donors, healthcare organizations were a receptive audience because of the market’s potential impact on community health.

“The health care organizations got it in a major way,” Klein said.

The leading donor is Premier Health, which gave $400,000 last year. Donations also came from the Caresource Foundation and Kettering Health Network, which additionally provides a 50/50 match for its employees who purchase a membership share of the Gem City Market. There are also plans to partner with Grandview Hospital staff on healthy cooking and nutrition classes on the site.

Of the 2,000 members the market aims for, they hope for 30 percent from lower-income households. Although lifetime membership shares of the market cost $100, they are only $10 for individuals and families who qualify for food SNAP benefits, WIC, or utility assistance.

Gem City Market is the first large-scale project to come from Co-op Dayton. As director, Klein is one of two full-time employees of the nonprofit, which also has a part-time membership coordinator, Maya Canaztuj, a 2017 graduate of Antioch College.

Co-op Dayton has three other co-ops in the “seed stage” of development in the areas of agriculture, marketing and wellness, and a partnership with the University of Dayton to explore co-ops in the fields of recycling, composting and solar energy.

The study found that 400 are owned by individuals nearing retirement age,  meaning that Dayton could lose 8,000 jobs in a decade if the businesses are sold and closed. Instead Co-op Dayton’s plan is to encourage the firms to sell their companies to their employees and turn them into worker-owned co-operatives.

In addition to keeping the jobs locally, the worker-owned cooperatives would have additional economic benefits, which Klein enumerated.

“Businesses that are worker-owned are less likely to lay people off during downtimes … and they have performance advantages,” she explained.

Although there are many types of co-ops, Gem City is based on the Mondragon model, an internationally-recognized co-operative corporation with roots in the Basque region of Spain. Though cooperatives are typically either worker-owned or member-owned, Gem City is a hybrid.

Organizers want the store to eventually be 30 percent community-owned and 70 percent worker-owned, with the initial plan for 20 to 30 employees. Once employees have worked in the market for one year, they will be able to buy into the store and become a worker-owner.

Once built, Gem City Market will be 15,000 square feet, with 10,000 square feet of retail space (a bit larger than Tom’s Market). Additional space will be used for stock, classes and community use.

Gem City Market’s products will be about 70 percent conventional grocery items, including an in-store brand for affordability. The other 30 percent will include organic and specialty items and locally-sourced produce and meat.

“Our focus is on affordability,” Klein said. “Affordability trumps convenience for low-income families,” she pointed out, referring to families who currently live in the area and may have to take a bus to get to an Aldi or Walmart for affordable healthy foods, while a corner store a block away may offer no fresh foods at all.

As the opening of the market nears, more concrete details require increasing attention from Klein and other members of the board, she said.

“We’re going from building power in the community to choosing which cheese to stock,” Klein joked.

The total cost for the Gem City Market is estimated at $4.3 million, of which $2.5 million has been raised so far, according to Klein. She hopes that Yellow Springs sees the value in supporting a community in need across town.

“We really hope that people in Yellow Springs will get involved,” Klein said.

For more information on the Gem City Market visit https://gemcitymarket.com.

*Elise Miller is a local registered nurse, writer and photographer.