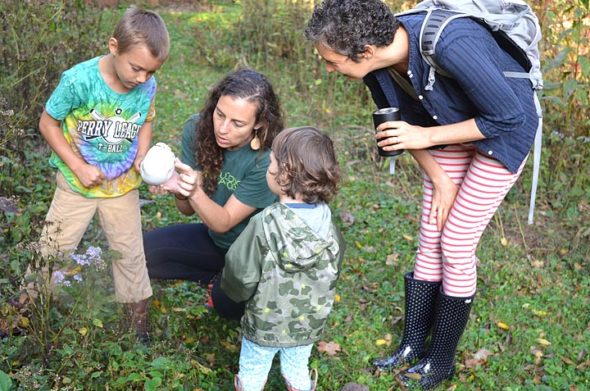 At a recent Forest Family session of the Nature Connect outdoor school, Emily Foubert looked closely at a puffball mushroom with Zander Breza, who had spotted the mushroom. Looking on are Meredith Carpe and daughter Havah, age 2. The program, Mondays from 9 to 10:30 a.m., is open to children 5 and under with an adult. Foubert, who grew up in Yellow Springs, is fulfilling her dream of opening up an outdoor school for children. Tuesday sessions for home-schooled children are also offered. (Photo by Diane Chiddister)

At a recent session of her Nature Connect outdoor school, held at Camp Greene on the edge of Glen Helen, environmental educator Emily Foubert didn’t intend to focus on spiders. But, on the way to the bathroom, the children spotted one in its web.

All eyes went to the insect, and the kids burst forth with questions. What sort of spider was it? How many legs do spiders have? Where do the legs connect to the body?

Foubert did what she likes best to do, which is to follow the children’s energy and curiosity. When a child wanted to draw spiders and others did too, she provided paper and pencils. She brought out the nature guide to help the kids answer their questions — the insect was a spined micrathena, and yes, it had eight legs. Foubert keeps guides to trees, flowers, insects, weather, and animal tracks at the ready on a picnic table, beside the camp’s “nature museum,” which is the interesting stuff (a stone, a feather, a shell) that kids find on walks and want to know more about. Math even made its way into the spider discussion, as one child wondered how many legs seven of the insects would have, altogether.

“It was a focused lesson that I didn’t plan, but it was perfect,” she said this week.

In this, its pilot season, the Nature Connect outdoor school offers two weekly sessions through November. The Forest Family program, for children through five with an adult, takes place Mondays from 9 to 10:30 a.m. And on Tuesdays, the school offers a Homeschool program for children ages 6 to 12. Both programs have openings.

Cost for the Forest Family program is $20 per session; for Homeschool, the cost is $30 for as many family members as attend. Drop-ins to either program are also welcome.

The spider experience was exactly what Foubert wants to make happen in Nature Connect. That is, while she comes prepared each day with a structured plan, she is more than happy to throw the plan right out the window and run with whatever grabs the children’s attention. And the natural world, she believes, always grabs their attention.

The goal of Nature Connect, she said, is “to instill curiosity, compassion and wonder for the land we’re on.”

The spider lesson took place last week with the older kids, and this week in the camp’s younger group, curiosity also led the way. Within the first half hour, the children’s attention was drawn to poke berries, a puffball mushroom, wild strawberries, chickweed,  and a snail making its slow way through the grass. In each case, a child exclaimed in wonder at her discovery, drawing the attention of others. And in each case, Foubert followed that energy, encouraging and respecting all questions and observations while adding her own enthusiastic response to the small wonders of the natural world.

That respect for the curiosity of children is one reason that parent Nora Geraghty sends her daughter to Foubert’s program.

“Emily empowers the children to feel good about their interests and questions, and she runs with those questions,” she said. “She makes it so exciting for them.”

Next came the morning’s official opening, when parents, helpers and children sat on a blanket in the grass as everyone sang “Good Morning Earth,” accompanied by volunteer parent Leah Hall on the ukelele.

“It’s time to go on our adventure and see what we see,” Foubert said at the song’s end, and the group — five children and five adults — set off to explore the natural world.

Nature Connect outdoor school is Foubert’s dream come true, she said recently. Raised in Yellow Springs, she links her passion for the natural world to having explored the Glen as a child at the Antioch School, along with vacationing with her family in the Catskills.

“I love the Glen,” Foubert wrote in an email. “I have visited it often ever since I was a little kid, and subsequently the pine forest and Yellow Springs Creek would enter my dream world a lot too. When I was five or six, I had a recurring dream about finding this magical spring just inside the Glen along Grinnell Road. This dream was not lost on me when I began volunteering at the Trailside Museum this winter and families kept asking me when I might take their children into the woods, as a longer and more organized day program. Since I already had a deep relationship with the Glen, it seemed like the natural choice for where to hold these nature mentoring classes.”

After graduating from Yellow Springs High School and Beloit College, Foubert trained as a firefighter in California; the long hours outside helped clarify her deep connection to the outdoors.

Wanting to share that passion with children, Foubert interned at the Aldo Leopold Nature Center in Wisconsin, then spent a year at the Wolf Ridge Environmental Learning Center in northern Minnesota. Following that, she was hired as an interpretive naturalist in a Twin Cities park district.

While in that position, Foubert began realizing that many people approach environmental education differently than she does. In the parks job, while she was able to take children into the natural world, the experience seemed limited by so many rules: no picking up stones, for instance, and no throwing stones into the river.

One incident clarified for her the sort of different experience she wanted children to have. While on a walk in the park, a child called out that he saw something. Everyone stopped, looked in the same direction. A deer was standing close by, looking back. The children froze, watching the deer.

“For a moment, everything stopped, and it was just us and the deer,” she said. “They were experiencing wonder in their bodies, I could see it. I could see it pulsating. I could see the curiosity.”

One little boy wanted to get closer to the  deer, and thought creeping up to it would be a good idea. Foubert let him try out his idea; he and the others learned that when you creep up on a deer, it quickly runs off. Still, they had followed their curiosity and learned something.

What she wanted, Foubert realized, was to provide children with the opportunity for that sort of encounter with the natural world: spontaneous, allowing their natural curiosity and wonder to lead the way. Foubert left the parks job and later found a community of like-minded people at the Weaving Earth Center for Relational Education in Sonoma, Calif., where she found ways of learning and teaching about the natural world that felt right to her.

Several years ago, severe back problems laid Foubert low, and she returned to family and friends in Yellow Springs. After healing began with the help of a new doctor, she felt ready to make her nature school a reality. She also realized that her hometown was a good place to do it, with its emphasis on environmental awareness and love for children.

“Yellow Springs is a great fit for this,” she said.

Last spring, Foubert began offering Bird Language classes at Glen Helen, sharing with others her knowledge of how birds communicate with each other, a system developed by the naturalist Jon Young. And she also began talks with the Glen on starting an outdoor school. Glen officials have been very open and helpful, she said.

For the outdoor school, Foubert brought to Yellow Springs the model of Nature Connect, developed by Brinkley Hutchings, a friend of Foubert’s from the Weaving Earth Center, and launched in North Carolina. The local program is the first Nature Connect in Ohio.

After this session of Nature Connect ends in a month and a half, Foubert plans to offer another session in the winter, to “see what’s out there to discover in the snow.” And in the spring, she hopes to offer after-school sessions as well.

Overall, she believes, children thrive when they have the opportunity to follow their curiosity in the natural world. And she thrives as well, sharing her love for nature with others.

“We become fully alive and happy when we do it together,” she said.

For more information, call 475-2759 or go on Facebook to http://www.fb.com/natureconnectohio.