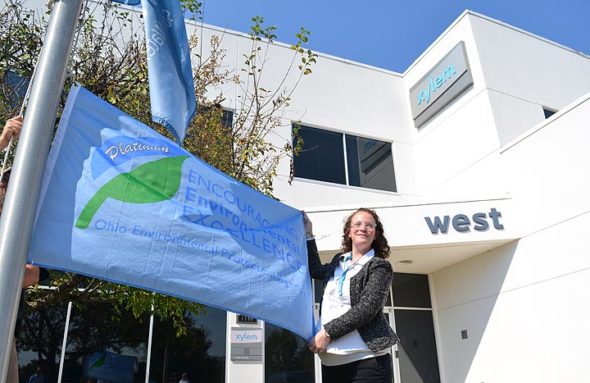 YSI Senior Scientist Jessica Moyer displayed the flag the company received for an Ohio EPA Encouraging Environmental Excellence award at its Brannum Lane facility. YSI received the highest level — platnium —for its work to conserve resources at their facility and in the wider community. YSI, now owned by Xylem, is a 70-year-old local company that designs and manufacturers water sampling and monitoring instruments used around the globe and in the region, including by the Ohio EPA. (Photo by Megan Bachman)

It’s been 16 years since Vernay Laboratories began working under order of the U.S. Environmental Protection Agency to develop a plan to clean up contamination at and around the company’s former manufacturing facility at 875 Dayton St.

But Vernay has more work to do before its final cleanup plan is approved.

This month, the U.S. EPA responded to Vernay’s latest plan — an update to a 2009 draft — with 11 pages of exhaustive requests and further questions.

In its comments, the EPA noted that the update “provides a more robust remediation strategy.” However, the agency added, Vernay’s plan “is not sufficient for final approval at this time.”

Specifically, the EPA asked for more details from Vernay about how the company will remove “hot spots” of highly contaminated soil at the one-time rubber parts manufacturing plant, which continue to flush contaminants into the groundwater and storm water runoff that leaves the property.

The EPA document also pushes for higher standards for the final cleanup than the company proposed. It criticizes plans for ceasing underground monitoring in the near future and sending treated groundwater directly into storm sewers. And the agency asks for more up-to-date studies on how much pollution exists and where it is located.

In a letter to Village Council this week, neighbor Marcia Wallgren wrote that the EPA’s review was “good news for the Village.”

“It echoes the critiques our experts have made, and asks for far more detail than we called for,” Wallgren wrote, referencing the environmental experts hired by neighbors with funds from a lawsuit settlement.

“The EPA has come out strongly for a comprehensive cleanup,” Wallgren added.

According to an EPA spokesperson, agency officials are hoping to settle on a final proposal in December, after which the plan must be approved by agency supervisors.

That would be followed by a public comment period and public hearing, which could come in late spring or early summer of 2019, according to Rafael Gonzalez of the EPA’s Region 5 office in Chicago.

Gonzalez also addressed the reason for delay. Since the Vernay cleanup process began in 2002, regulatory changes stemming from new research findings has given the agency a better understanding of how to clean up contamination at a site, he explained.

“The remedy we had wasn’t state of the art,” Gonzalez said. “Vernay is an old site, so I think that’s what is going on.”

Council addressed the issue briefly at its Oct. 15 meeting, discussing a draft of a letter it had planned to send to the EPA on the matter.

The letter, prepared by the Environmental Commission, will be amended in light of the new developments, according to EC member Tom Dietrich, who urged Council to send a letter.

“I still think it would be very important to submit to the U.S. EPA to show the village’s interest in getting a strong and thorough cleanup,” Dietrich said.

Vernay initially discovered contamination at its site in 1989, but waited nearly a decade to investigate the full extent and location of contamination. Over the last 16 years, Vernay has taken steps to monitor and contain the pollution found in soil, storm water and groundwater. The groundwater plume is located directly below the property and extends beneath residential neighborhoods to the east, stretching across Wright Street and Suncrest Drive to Green Street.

The contaminants of concern from Vernay’s facility, operational from 1951 to 2004, include known and likely carcinogens and neurotoxins such as the chlorinated solvents TCE and PCE, their breakdown product, vinyl chloride, and several other volatile organic compounds.

The full EPA comments will soon be available for review at the Yellow Springs Library.

In other environmental news — 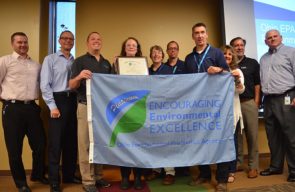 The Encouraging Environmental Excellence award is given to businesses and other organizations that not only comply with state pollution rules but also participate in environmentally beneficial activities, both at their facilities and in their community. YSI received the award’s highest level, platinum.

YSI, a 70-year-old local water instrument company now owned by Xylem of Rye Brook, N.Y., is only the fourth firm in the state to receive the platinum award, according to Ohio EPA Director Tim Butler.

“We turn a lot of companies away,” said Butler at a presentation ceremony at the Brannum Lane facility in September. “You knocked it out of the park.”

“Platinum level is you not only have thought about your product and your four walls, but how you act communitywide” to protect human health and the environment, Butler went on.

YSI, which manufactures water sampling and monitoring instruments, has implemented energy and water conservation  programs at its Yellow Springs facility, offers a take-back and recycling program for its equipment and recently phased out using equipment batteries that can leak and pollute the environment, according to an EPA news release.

In addition, through the Xylem Watermark Program, the company participates in youth water education and promotes volunteerism among its employees, who pick up trash and remove invasive species from the Little Miami River, among other activities.

“The crown of your achievement is how you get out and work in your community,” Butler said. “It’s no picnic picking up tires from the river.”

YSI Senior Scientist Jessica Moyer said that while it is nice to be recognized for environmental stewardship, the company does its work because it is important.

“YSI is committed to minding the planet, not just around the world, but in our backyard,” Moyer said.

A fight over a proposed limestone quarry north of the village could be headed for federal court after Clark County rejected a settlement with the mining company last month.

The Clark County Commissioners voted 2–1 against the proposed settlement with Enon Sand and Gravel, which would have required the company to seek approval from the county board of zoning appeals for two large areas of the proposed 420-acre mine in Mad River Township, while allowing it to move ahead with mining elsewhere.

Previously, Clark County officials notified Enon Sand and Gravel that a conditional use permit from the county board of zoning appeals was required for the entire parcel. The company sued, and after the proposed settlement was rejected last month, the two sides could either renegotiate or will see each other in court.

Close to 100 area neighbors and other opponents of the mine attended the commissioner’s meeting. According to Kathleen Matthews of Citizens Against Mining, while most opposed the settlement, the ultimate outcome of the court case is uncertain.

“It is a victory now, but down the road, who knows?” Matthews said.

The Citizens Against Mining group has raised concerns about the mine’s possible impact on local groundwater and surface water as well as increased traffic and noise from the operation. Fighting the quarry on multiple levels, the group plans to appeal the mining permit to the Clark  County Court of Common Pleas after a previous appeal at the state level was denied this summer. And the group is also awaiting a decision from the Ohio EPA on a discharge permit for mining operations, which it has commented on extensively.

A related organization, the Mud Run Conservancy, is hosting a benefit fundraiser for its efforts on Saturday, Oct. 20, from 4 to 7 p.m. at the Agraria barn, 131 E. Dayton–Yellow Springs Road.

An Australian company is looking to build a 1,400-acre solar array in a rural area just outside of the Village of Clifton. The array would span property in Miami Township, Xenia Township and Cedarville Township.

According to the lease terms for the Kingwood Solar Farm, Lendlease would use land for 43 years and pay property owners $1,000 per acre, a rate which increases every few years for inflation. The company had 1,000 acres leased and was looking to secure 400 additional acres in the project area, according to an August letter to area landowners.

Crissy Spracklen, for one, doesn’t plan to lease the 90 acres on Fishworm Road in Cedarville Township her family owns and farms. She’s also trying to organize local farmers and landowners to resist the project.

“Yes, we need renewable energy, but there’s got to be another way around it than to take out prime farm ground,” Spracklen said in a recent interview.

Spracklen is concerned that declining commodity prices for soybeans especially will push many landowners to sign leases, which may mean area farmers have less land to rent. She is also worried about the high-quality area soil and the next generation of farmers.

“If you love the land, then you take pride in taking care of it and passing it down,” Spracklen said.

Spracklen is married to Alan Spracklen, who is the son of former Miami Township Trustee Lamar Spracklen.

Lendlease has yet to apply for a state permit to build the solar farm, according to the Ohio Power Siting Board this week. However,  they are expected to file soon, a representative of the agency said.

The project is not a matter of local zoning because of its large size, according to Miami Township zoning inspector Richard Zopf this week, so the state would ultimately greenlight the project.

The Tecumseh Land Trust, meanwhile, does hold several conservation easements on farmland in the area that would prevent them from being used for solar installations, according to land trust Director Krista Magaw this week. Property owners in the area have been contacted about an upcoming land resource fair hosted by the land trust, but it’s ultimately up to them to decide the fate of their property.

“It’s a choice that people have but, essentially, [they shouldn’t sign a solar lease] if they are interested in farming that land in their lifetime,” Magaw said.

A Bath Township biodigester upgrade will move ahead, but at a much smaller scale.

The biodigester company, owned by Renergy of Marengo, had originally applied to add a 1.7-million-gallon tank at the facility, which already has a 700,000-gallon tank, but canceled that plan after an EPA hearing in March, when neighbors complained about the expansion’s potential to negatively impact the local environment.

In addition, neighbors drew attention to the related issue of the application of Renergy’s liquid fertilizer product to nearby farms, which they claimed was polluting area waterways and wells.

The Village of Yellow Springs was sending some 72,000 gallons of sewage sludge to the biodigester each month from its wastewater treatment plant, according to Renergy officials in March.

The Ohio EPA’s permit will allow Renergy to install equipment needed to pasteurize the wastes, producing what is known as “exceptional quality” biosolids that have far fewer fecal coliform pathogens. According to company officials, the more thoroughly processed waste will yield a higher quality fertilizer and ease neighbor concerns.

The biodigester is on leased property at the family farm of Bath Township Trustee Tom Pitstick, who also raises 7,000 hogs on site.