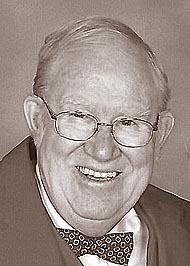 Vaughn Deal of Yellow Springs died peacefully in Friends Care Community on Sept. 25, 2018.  He was 92.  He is survived by his wife, Esther; his brother, David; his brother, Gary; his son, Steven; his daughter-in-law, Nancy; his grandson, Kelson, Kelson’s wife, Jennifer, and their daughters, Shiloh and Emberlee; and his grandson, Brendon.

Vaughn was one of six children born to Grover and Zylpha Deal.  He started his spiritual life at St. Paul’s Lutheran Church and was a devoted churchgoer his entire life. He started his work life delivering newspapers during the Depression to bolster family finances, a task which exemplified his hallmarks — benevolence, duty and service.

He enlisted in the Navy in October of 1943 during World War II, joined the commissioning crew of LST 940 and piloted the ship through the Panama Canal on the way to its participation in the invasions of Iwo Jima and Okinawa in 1945.  His service to the Navy continued through 1985 when he retired from the reserves as Senior Chief Quartermaster.

He married his first wife, Eileen, in 1946.  They lived in several Michigan locations with son, Steve, and daughter, Ginny, while he worked for the Martin, Pure and eventually Union Oil companies. They settled in Hinsdale, Ill. in 1962 and lived there until retirement.  While in Hinsdale, he and Eileen fostered four children of a neighboring family whose parents both died within two weeks.  Vaughn also supported son Steve’s musical ambitions and spent many Thursday nights at the Keynote Club enjoying big band music until 2 a.m.

In the late 1970s, he and Eileen began migrating to an 11-acre property in Coldwater, Mich., on which Vaughn hand-built a log cabin on the shores of the little creek they called the Nile.  When Eileen developed Alzheimer’s, they moved to Wolf Creek Lutheran Home in Holland, Ohio, where he cared for her in an assisted living apartment for seven years.  Early in 2004, he and Eileen moved to Yellow Springs.  Vaughn moved in with Steve and his family and Eileen entered Friends Care Community. Vaughn was with Eileen all day, every day, until she passed a few months later.

Vaughn joined Bethel Lutheran Church in Hustead, Ohio, where he was instrumental in the development of the Kay M. Glaesner Community Center.  At Bethel he met Esther M. Garrett and they were married in 2008.  Esther and Vaughn lived very happily for several years in her Enon, Ohio, home.

A memorial service was held at Bethel Lutheran Church on Wednesday, Oct. 3. Arrangements in care of Jackson Lytle and Lewis Life Celebration Center. Condolences may be forwarded to the family by visiting http://www.jacksonlytle.com.