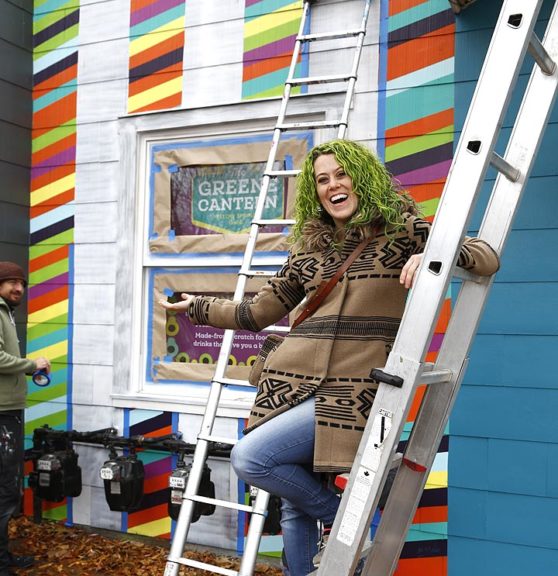 In addition to her other businesses, Brittany Baum has been busy supervising the construction crews at work on her new bistro, the Greene Canteen, at 134 Dayton St. The colorful exterior was designed by Slagle Design in Columbus, with painting done by the Mural Machine of Dayton. (Photo by Gary McBride)

The “clean food” restaurant will also feature baked goods, including Baum’s fresh-baked Bavarian-style pretzels, which she sells at her two successful bakeries in Columbus and Cincinnati.

And since fresh pretzels don’t have a long shelf life, they will be available in limited quantities, Baum said.

“We’ll bake pretzels every morning in a limited number, and then once we’re out, we’re out,” she said.

The new eatery, located at 134 Dayton St., is still under construction. Baum and her husband, Tim, who are village residents, are busy supervising the work crews and finalizing the menu options for the bistro they hope to have open around the first of the year.

Baum owns two pretzel bakeries under the name Brezel, one in Columbus since 2011, and one in Cincinnati’s Over The Rhine district since 2014. They rotate dozens of pretzel varieties, including some exotic treats like roasted garlic & cheddar, mango habanero, dark chocolate & cherry, coconut & almond and kale, to name a few, along with dips as varied as sriracha cream cheese or vanilla frosting. In addition to her retail locations, she supplies pretzels to area restaurants, including the two Lock 27 brewpubs in Dayton.

The Greene Canteen will be limited to one or two pretzel varieties each day, Baum said, due to space considerations and concentration on their primary menu items.

The pretzel focus began in the 2000s, when Brittany and her husband worked for Columbus automotive parts manufacturer Hirschvogel, Inc., which called for some travel to Germany.

“Whenever we would go over there, we would eat pretzels all the time,” Baum recalled. “We realized that you can’t find pretzels in the U.S. that are like the ones in Germany, so we came up with the concept.”

Baum started making her pretzels as a hobby with a friend, which led to selling them at farmers markets, where they would usually sell out. She soon bought out her friend’s stake and opened Brezel’s first location in Columbus.

Baum and her husband moved to Yellow Springs about three years ago, partly to be “midway” between her businesses in Cincinnati, Columbus and Grand Rapids. They were motivated to move here by the village’s spirit of community, open-mindedness and promotion of the arts, Baum says.

“Plus, since we travel often, living in a place that has a slower pace of life is very attractive for us,” she added.

Baum’s affinity for the arts community led her to co-organize the first Yellow Springs Porchfest this past October, which featured over 36 musical performers on porches around the community.

Not long after moving to Yellow Springs, Baum began to consider opening a business in the village, but it was tricky to find an available restaurant-ready location. As soon as something looked to be available, she found others had already laid claim to the space.

So, she went with a space that was not restaurant-ready, which would require more construction and alterations than other types of businesses.

“Anyplace that I could get I’d have to build-out and put a kitchen in, and my landlord would have to agree to that, so that’s what the challenge has been,” Baum said.

The Greene Canteen will have indoor seating, but also be set up for quick “grab and go” service for those on the move, and potentially seasonal outdoor seating. Baum is working to make the menu different from and complementary to other nearby fare.

While creating her menu items, she’s working with a licensed dietician/nutritionist with specific health benefits and food sensitivities in mind.

“Certain ingredients are good for certain things, like there might be an ingredient that’s good for digestion, or for inflammation. So we’re trying to be cognizant of what ingredients can do for your body, more than just taste good.”

Baum also sees that the restaurant might help educate people about the benefits of healthy eating.

“Not only are you going to have good food, but you’ll get to learn what the food’s doing for your body,” especially with regards to smoothies and juices, Baum said.

“My goal is to have information available to give consumers a little more insight,” she added.

Baum is also looking to partner and cross-promote with other businesses in town, such as local yoga studios and area farmers, in order to source fresh produce.

The big question: When will it open? Baum still can’t quite say. She wants to give her work crews time to do everything right, rather than rushing for a deadline.

But she hopes to be open in time for the healthy-living resolutions that come with the new year.

“The beginning of the year tends to be when everyone starts to refocus on their diet, so that is helpful to us,” Baum said.  “I’ve talked to other juice and health food businesses, and they tend to do really well in January.”

Baum is considering holding some limited opening “special tasting” events before the Canteen opens full-time. Visit http://www.thegreenecanteen.com or find them on Facebook for updates.