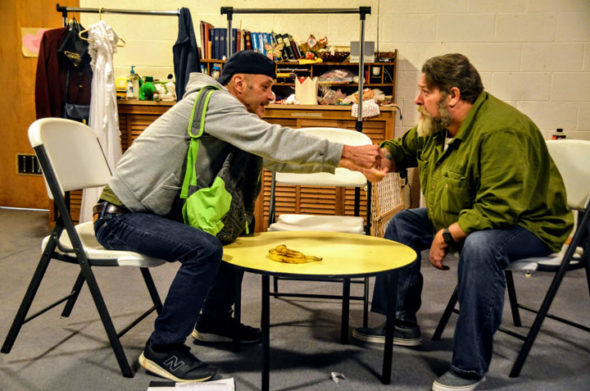 Robb Willoughby, left, and Troy Lindsey rehearse a tense scene from “Bro” over a pair of aging bananas in the Sunday school room at First Presbyterian Church. “Bro” is one of the short plays that will be performed as part of the YS Theater Company’s production of “W3 — Three Humorous Tales of Horror,” opening this weekend, Friday–Saturday, Oct. 26–27, at 8 p.m. and continuing the following weekend. (Photo by Lauren “Chuck” Shows)

On a Tuesday night at the First Presbyterian Church, Ellen Ballerene held her script in her lap as Kayla Graham and Shekinah Williams rehearsed a scene from “Dirty Laundry,” one of three short plays that the YS Theater Company will present as part of “W3 — Three Humorous Tales of Horror” this weekend and next.
The plays will be performed Fridays and Saturdays, Oct. 26 and 27 and Nov. 2 and 3, 8 p.m., at the First Presbyterian Church. Admission is $12.

The trio sat in the church’s foyer near its front double doors. Graham’s character was pleading for Williams’ character to help her memorize her lines — a reflection of real life, as this night’s rehearsal was the actors’ first “off-book,” in which they can no longer refer to their scripts.

And what’s the plot of “Dirty Laundry?”

To keep the audience in suspense, Ballerene, who’s directing the YSTC production, would only say that it is set in a laundromat and apartment building. The production’s other two short plays, “Bro” and “Mr. Pringles’ 1 p.m.,” take place in a kitchen and in a lawyer’s office over a divorce settlement, respectively.
From around the corner came the show’s prop master, Miriam Eckenrode Saari, with a bag full of wigs. All four women stopped to examine them, exclaiming over one particular short, blonde, curly wig.

“This one would look amazing on you, Shekinah,” said Graham, fitting it atop Williams’ head — though Williams looked skeptical.

All the while, strains of orchestral music seeped into the room from under the doors of the church’s Westminster Hall — the YS Chamber Orchestra was also rehearsing that night.

“W3” is Ballerene’s full-production directorial debut. She’s been acting since elementary school, and has been heavily involved in productions throughout the Miami Valley region since 2010.

When asked if she’d prefer that the YSTC have a space to themselves to rehearse, she shook her head and smiled.

“If we ever do get a space for the community — one that’s just for performances — it’ll be for everybody,” she said. “That’s the way it’s supposed to be.”

Eckenrode Saari, still weighing the pros and cons of two blonde wigs, piped up.
“This place is a beehive — there’s something going on in every room,” she said.
Attesting to the truth of this statement, another group of “W3” actors were rehearsing in the church’s Sunday School room down the hall. Robb Willoughby, who wrote the trio of plays, was going over a scene with Troy Lindsey. The two were rehearsing “Bro.” They sat opposite one another at a short table. Stage Manager Chloe Burchett prompted them occasionally on their lines. Colton Pitstick, who’s in “Dirty Laundry,” sat wrapped in a blanket on the couch next to her, watching Willoughby and Lindsey in a terse exchange.

Noticing the arrival of this writer — and used to interruptions — Lindsey and Willoughby took a break.

Willoughby has been a playwright for years — “Dirty Laundry” was written in 2000, and premiered in New York City. “Bro” has played several times in different cities, and this year played in Washington D.C. and will be playing in Los Angeles at the same time it’s playing in Yellow Springs. “Mr. Pringles’ 1 p.m.” will make its debut on the First Presbyterian stage.

Though he’s a playwright full-time, Willoughby said that it’s not what pays the bills for him.

“I work at the brewery,” he said. “At some point or another, I think we all go through there. It allows me to do writing in my time otherwise.”

Though all the plays in “W3” have a horror focus, Willoughby writes a variety of genres. One full-length play, “/’Se-krits/,” is a comedy/drama following a group of co-workers in an office; the play was chosen in May to premiere at the Las Vegas Little Theatre.

“I do all kinds of stuff, but [the three included in ‘W3’] are particularly good for Halloween,” said Willoughby. “Ellen [Ballerene] had read them a while back and suggested it. Ellen was sort of the genesis of the whole show.”

Back in the foyer, Graham and Williams were still rehearsing, and another of the show’s actors, Reilly Dixon, had joined them — and he was pointing a prop gun at the women.

When asked what was going on in the scene, however, the actors clammed up. In fact, all of the folks rehearsing there that night were decidedly mum on the various plots of the plays to be performed.

Perhaps this is appropriate to the genre — horror is propelled by uncertainty and mystery, after all, and knowing too much in advance could spoil the experience.
Director Ballerene did warn, however, that the plays all feature adult themes and adult language.

“There’s some knife play and some gun play, some profanity,” she explained. “It’s no ‘Game of Thrones,’ but it’s probably not appropriate for anybody under 13. At their parents’ discretion, of course.”

When pressed a final time for details on what theater-goers might see, Ballerene only smiled enigmatically.

“You’ll just have to see the show,” she said.