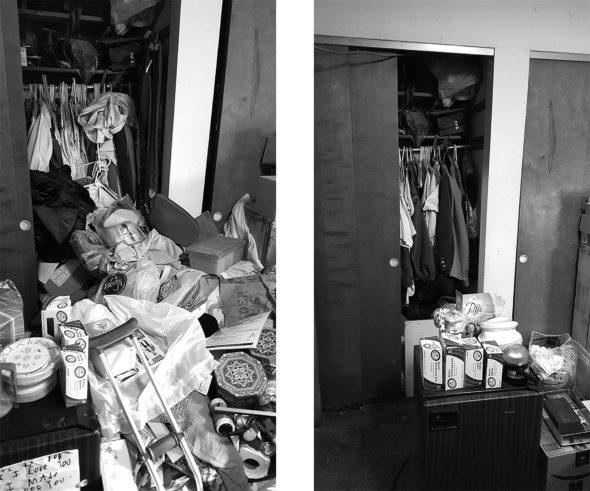 Before and after of a client’s bedroom closet. “It’s not a process of being shamed into anything, it’s a co-operative process,” said her client. “There’s still some to go but I can say anything that’s gone from this room and the house, I don’t miss it.” (Submitted photos by Anne Eberhardt) 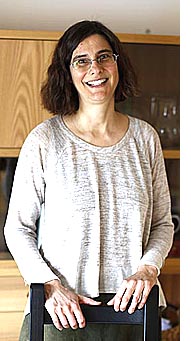 Anne Eberhardt of Anne’s Decluttering Service considers herself a personal organizer who helps her clients get tidy within their comfort zone. (photo by Gary McBride)

As the new year approaches, one of the most common resolutions is to finally “get organized” and simplify your life by simplifying your space. You’re going to get serious about cleaning out that closet or basement or garage.

But each year, time slips away. A new year’s resolution gets put off until “spring cleaning,” which slides into the carefree summer, then back to school, holidays and another year has zoomed by.

Yet the clutter survives, maybe even multiplies.

“It’s really my calling,” said Anne Eberhardt, owner of Anne’s Decluttering Service, who is at her best in the midst of a mess.

“I get calm when I enter a room with clutter. I get calm and confident that we will get on top of that.”

In addition to decluttering, Eberhardt is a trained psychologist, so has an understanding of the feelings and motivations behind accumulating clutter, and our aversions to dealing with it. In turn, she often uses her training to determine the most effective way to help her clients work through their stacks and stashes.

“You might call me a professional organizer, but I would prefer to be called a personal organizer,” she stated. “because I really adjust depending on the needs of the client.”
Eberhardt’s journey to becoming a decluttering professional began in her home country of Germany.

Eberhardt and her husband, Pascal Hitzler, moved to the U.S. from Germany in 2009 when he accepted a professorship at Wright State. Their daughter, Merula, was just five months old at the time. They initially lived in Beavercreek, but soon began spending time in Yellow Springs, and in 2014 they moved here.

“It’s quite an amazing place,” Eberhardt said of the village, and added that they would have located here initially if they’d been aware of it.

“I’m actually a psychologist, and I’ve worked as a therapist, but it was not giving me fulfillment back in Germany,” she said. “I quit the therapist job and started to work as a secretary at the university, and I liked the organizing, the filing and scheduling.”

“Then I got pregnant, we had the little one, then the move,” Eberhardt recalled. “I was sitting with a question: where do I find my calling?”

She consulted with Maxine Skuba, a career counselor here in Yellow Springs.

“It was like the scales fell away from my eyes — I always liked finding structure, organizing, and I said ‘that’s it.’ But I didn’t know how to make it real.”

Last year in January, she got a call from her brother back in Germany. He said, “I need your help again to declutter my closet when you come back to Germany during the summer.” With that she made the connection that she could make organizing her business.

“I’ve done that a lot with my friends and my family and then it fell together. Then I made it real last fall,” she recalled.

She officially started her business, Anne’s Decluttering Service LLC, in November of 2017, getting her license and business insurance in place.

“I talked to some people in town that I had an idea to do a decluttering business and immediately I got my first clients,” she said. “They knew me, so that was helpful, and they hired me on the spot, and I could right away start with my business.”

Decluttering is becoming big business. One recent bestselling book, “The Life-Changing Magic of Tidying Up” by Marie Kondo, suggests holding each object and determining if it “sparks joy” or not. If not, get rid of it.

Another book with the ominous title “The Gentle Art of Swedish Death Cleaning: How to Free Yourself and Your Family from a Lifetime of Clutter,” by Margareta Magnusson, is a popular guide to downsizing and organizing a home to the state one would want it to be in if they died unexpectedly, and their family had to deal with what is left behind.

“For reading and getting in touch with the idea of decluttering, I would definitely recommend those books,” Eberhardt said. “There are definitely parts that are helpful, and [Kondo’s] main question — ‘does it spark joy?’ — that’s an amazing and important question.”

However, Eberhardt finds some of the methods described in the books too extreme and unrealistic.

“[Kondo’s] approach of coming to a client’s house in the morning and pulling everything out onto the floor — a lot of my clients aren’t capable of doing that. So I’m more gentle, adjusting to their ability and surroundings. They still need to live in their space.”
When decluttering, many decisions are obvious, like getting rid of trash or donating unused items. But many things have sentimental value, whether it’s an ugly old chair or keepsakes or greeting cards.

“The decision to let go of something when you are emotionally attached — especially a photo — it takes more time and you need space to make a considered decision,” she said. “If you say goodbye, be sure it’s a real ‘good’ goodbye, and that you won’t regret it. That’s the point where you need to know not to rush through and overrun your emotions. It might feel liberating at first, but if you didn’t do it in a deliberate and compassionate way, it might be more painful in the end.”

To get started, Eberhardt offers a free initial consultation, to size up the job and get a feel for the client’s objectives.

“I ask the client what their vision is, their wishes and concerns.”

“To let someone into your home and show everything, it can be overwhelming or even shameful,” she acknowledged.

“Some people have a history of being judged, or they judge themselves, so it’s a really hard situation,” she says. “But it can be easier when it’s a stranger, someone you think of as a professional.”

She often recommends starting with a two-hour session because it can be very hard work, physically and mentally.

“It’s a chain of single decisions, one after the other, and when you’re emotionally attached, it’s even harder,” Eberhardt said. “It’s a holistic process — you need your mind, your body, and your spirit — and after two hours you’re exhausted.”

Some clients will just point her toward the clutter and let her work her magic independently. But usually, it’s a team effort.

“Most of the time I work one-on-one alongside the client, because I’m not the decision maker,” she said. “I’m there to help my clients make their decisions, I’m facilitating that. I keep their main goal in mind.”

Her goal? To help clients reclaim their space and restore order.

“I love when at the end my clients are happy, and when I see how things are cleaned up,” she said. “I love doing the whole process.”