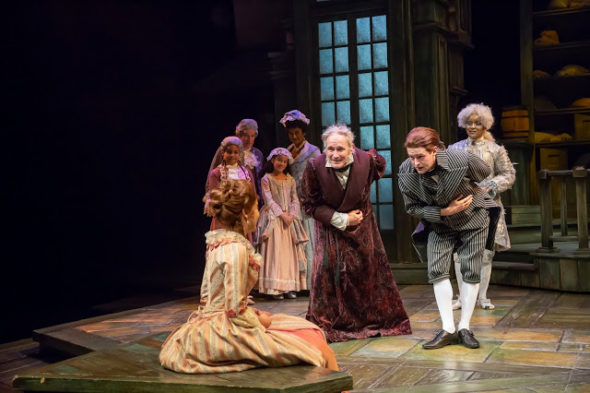 There is much ham on the bone of Michael Haney’s production of Howard Dallin’s adaptation of Charles Dickens’ “A Christmas Carol.” Every year since the Great Flood this production has gotten dried off and thrust under stage lights. The script is not a finely honed work: it’s more robust holiday pageant than play. But, like a Thanksgiving Turkey, it’s what the audience expects, for it’s a story they know in their bones. And to get dramatic confirmation once a year — that the wicked can change and humanity is our business — they return to the Cincinnati Playhouse every Christmas season. This is not a bad thing. This robust affirmation of the human animal goes to the very root of what theatre is — a social bond of collective improvement.

There was one young girl sitting behind us opening night who was beside herself with laughter for each bit of broad stage business, each hammy line towards the end of the play (after Scrooge has transformed from humbug pit bull to sentimental pound puppy). Her giggles were not only insuppressible, they were as infectious as a confection; her young hippocampus was working overtime, storing up giddy memories that would last her well into dotage.

Bruce Cromer has now trod the Playhouse board as Scrooge for thirteen years. Prior to that, for eight years, he trod the same board (with the same director, Michael Evan Haney; same script; same set) as Bob Cratchit. I have now seen four productions of this script at the Cincinnati Playhouse. First with a fellow as Scrooge whose foghorn-voice could alert riverboat captains up and down the Ohio. Then I saw Joneal Joplin in the role. Cromer played Cratchit to Joplin’s Scrooge. Then in 2012 I saw Cromer in the role for the first time. This latest production is the best yet.

Cromer has aged into Scrooge in more ways than one. Deliberate intention is gone: he now moves through the play with the freedom of instinct charged by habit. He becomes Scrooge instead of trying to be him. Cromer can be a subtle and exacting actor. He can also slather the spicy mustard onto thick slabs of ham, which is what he does here. He clearly takes joy in spreading the Christmas spirit. Cromer is a physical actor. As Scrooge the curmudgeon he’s hunched over and scowling. As the reformed Scrooge he’s light on his feet and brimming over with joy. Cromer’s agile physicality sets the style and tempo for this production, which from beginning to end moves like a brisk dance

The entire production has mellowed nicely — with some actors new to their roles and others wearing the parts they’ve worn for years like old slippers. Particularly I’m thinking of Greg Procaccino, who has played Jacob Marley and Old Joe since 1991. These are character roles that demand an actor with theatrical volume, an actor who can bang the lower notes of the piano and tinkle arpeggios across the higher keys. Procaccino delivers both parts with gusto.

Among those new to their roles, at least new to their roles for me, are Charlie Cromer (Bruce’s son) as Young Ebenezer Scrooge; Annie Fitzpatrick as Mrs. Fezziwig; Ryan Wesley Gilreath as Bob Cratchit; Sara Masterson as Belle; Kelly Menelkoch as Mrs. Cratchit; and Britney Nicole Simpson as Ghost of Christmas Past and Scrooge’s maid, Mrs. Peake.

Charlie Cromer fits comfortably into the role of Young Scrooge, naturally mirroring many of his father’s moves. And his scene with Procaccino as Marley — when they force the spendthrift Fezziwig to give up his business to pay off his debt to them — I found particularly moving.

(Oddly, with the shift of Republican morality in this country, or what passes for morality, Marley and Scrooge’s greed might be interpreted as entrepreneurial pragmatism — a show of grit, a demonstration of personal responsibility, an exhibition of American Exceptionalism; and Fezziwig’s carelessness — a demonstration of laziness, personal irresponsibility, and a kind of creeping socialist mindset that is antithetical to the American can-do spirit.)

Scrooge is clearly torn about the direction his life is turning. Sara Masterson as Belle has the depth of understanding to feel the sorrowful weight of Young Scrooge’s shift of mind, which seems not to come with the rapaciousness we see in Marley, but, rather, out of a feeling of inadequacy.

I might be wrong, but it seems to me that Annie Fitzpatrick has fleshed out her repertoire over the past few years. She seems no longer restricted to the buttoned-up types, and her Mrs. Fezziwig has unfastened her girdle to coquettish and joyous affect.

Finally, there’s Britney Nicole Simpson as Ghost of Christmas Past and Scrooge’s maid, Mrs. Peake. As the Ghost of Christmas Past Simpson is both spritely and robotic. But being otherworldly, like Shakespeare’s Ariel, she’s void of emotions—an empty vessel for forces of spiritual intent. As Mrs. Peake she’s the opposite: her grubby humanity shows its face—poor, guilty, and desperate. Ryan Wesley Gilreath plays Bob Cratchit with such delicate nimbleness he seems almost an animation of the part, an animation Dickens would clearly approve of. And Kelly Mengelkoch as Mrs. Cratchit is his perfect match, his perfect foil. While Gilreath’s Cratchit is a romantic and a bit of a fumbler, Mengelkoch’s Mrs. Cratchit is a realist with both feet solidly planted on the ground. While Gilreah’s Mr. Cratchit might buoy the family’s spirits, it’s Mrs. Cratchit that counts the money and holds the family together.

The following is a transcript of an interview that Dallas conducted with his granddaughter, Camila, after seeing “A Christmas Carol”:

Tony: So you saw the play when you were what?

T: How much do you remember about that production?

C: I remember Scrooge. And I remember the storyline. That’s about it.

C: Out of ten, I think I gave it a seven. I think I would give this an eight and a half or nine.

C: Lots of things. The actors were all very good. Like I’ve said in most of the reviews, cause the actors there are really good. I like how energetic he was at the end.

C: Yeah. That was really funny. Cause it was like surprising. He was way more energetic than me.

T: Right. Bruce has a lot of energy.

T: But, he had a hard time getting to the happy place, didn’t he? He had to practice with that little boy how to say “Merry Christmas.”

C: But, I feel like I stated to see a change when the first spirit came. So, when he like saw his past, he was like: Okay; he saw it.

C: He started to change then.

T: It’s sort of an interesting play, cause what you’re watching is — when he goes back in time — you’re watching what that world was like then. But the real tension of the play is with him, and how he’s responding to it.

C: Yeah. I think it adds a nice effect to the play. I was so confused at the beginning. Like when he goes into his house and there are sheets over everything. Why isn’t he taking that off? I was so confused. Like, who just has that laying around their house and doesn’t take that off?

T: Right. He’s trying to preserve the furniture from getting dusty, I guess. Cause he doesn’t want to pay the maid to dust, or something…

C: Uh-huh. Cause they look like each other. You can tell it from the face. So, it was more like, yeah, this is his younger self — because you can see the resemblance. And they acted alike.

T: That was one of the things Charlie was trying to get at — Bruce’s mannerisms. Bruce seems awfully comfortable in the role, doesn’t he?

C: Mm-huh. Definitely. I feel like he was more comfortable in the after part, rather than the first. He was very enthusiastic. I thought he’d be, like, more calm. Really, when I was watching it, I sort of forgot the storyline from, like what they showed in the Christmas past and future. Those things. So, when they went to the present, I thought, so what are they going to show? Cause they were showing him. Cause it was confusing — what were they going to show? But, I thought they did that well.

T: Did you hear the kid behind us?

C: Oh, those were the best.

T: That was the best.

C: That was so great. She like laughed her head off. She was laughing so much everyone just started looking at her.

T: It’s always nice when kids enjoy it like that.

T: Is there anything else you can think to say?

C: The voices were good when they were singing.

T: Greg Procaccino was good, I thought, as Marley.

C: He’s so loud. His frickin’ like chains bangin’ on the ground. I was like—Whoooo. That’s some spicy stuff.

T: Is there anything else you can think of?

C: I thought it was more detailed this time.

T: Yeah…So, how many stars out of five?

*The author is a longtime villager and theater writer. He writes theater reviews online at tonydallastheatrereviews.blogspot.com. This review was reprinted from his website both online and in the print version of the YS News with the author’s permission.