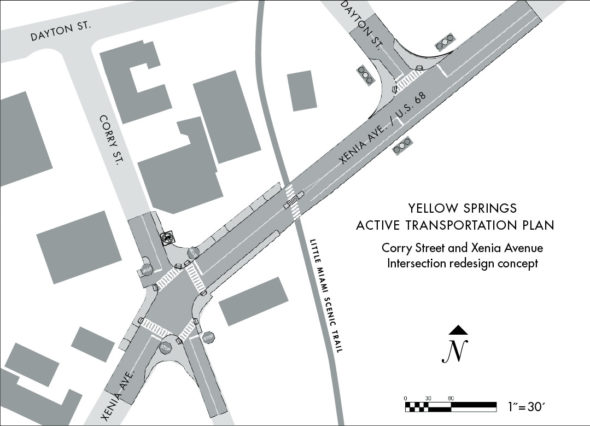 A possible redesign of the intersection of Xenia Avenue and Corry Street in the new Yellow Springs Active Transportation Plan includes the following features: stop signs rather than a stop light, curb extensions to slow driver turning speeds and reduce the distance pedestrians have to travel when crossing and a raised crosswalk on the southern leg to create a gateway for downtown. A stoplight would then be installed on Xenia Avenue at Dayton Street. (Map data courtesy of Village of Yellow Springs)

A raised crosswalk across Xenia Avenue from Tom’s Market to the Emporium. A sidewalk along Polecat Road to Ellis Park. Closing off Short Street to car traffic. Making Walnut Street one way southbound in front of Mills Lawn School.

Those were a few of the transportation proposals included in a 62-page local Active Transportation Plan unveiled at Village Council’s Dec. 3 regular meeting.

Defined as “any form of travel without a motorized vehicle,” promoting active transportation is one of Council’s eight major goals, according to Council President Brian Housh at the meeting.

“We want to encourage active transportation because not only does it improve health, but it also improves our environmental conditions, and it is an economic development driver,” Housh said.

Walking, cycling and using a wheelchair or personal mobility device are all forms of active transportation, Housh added.

Other ideas on offer were more bike racks, flashing beacons at some crosswalks, curb extensions to slow traffic at intersections and programs to encourage cars to drive slowly and share the road.

“This really accelerates what we are going to be able to do going forward,” Housh said.

In addition to new grant monies, the improvements could be funded using levies or public/private partnerships, according to Michael Blau of Toole Design Group’s Columbus office, the group contracted to complete the office plan. Paid parking was also mentioned as a possible revenue source.

According to Blau, the purpose is not just to boost recreation, but also to support those who bike to work and school on a regular basis.

“It’s not just weekend biking on a trail, it’s someone biking to the third shift at a fast food place, the student walking to school in the morning with their parents,” he said.

Still, the Little Miami Scenic Trail and its connection to a larger bike network in the Miami Valley is one area of the focus in the report. Those regional recommendations include plans for new bike trails to Young’s Jersey Dairy, Clifton, Ellis Park and Agraria.

Among the local recommendations are new sidewalks — especially one along Limestone Street from Dayton Street to Walnut Street, neighborhood bikeways — including one that travels through the neighborhoods north of Dayton Street, new crosswalks and traffic calming measures — such as a raised crosswalk across Dayton Street at Winter Street — and intersection redesigns.

One major redesign called for in the plan is where Xenia Avenue intersects with Dayton Street and Corry Street. A proposal calls for the stoplight now at Xenia and Corry to be moved to Xenia and Dayton. Then the curbs at Xenia and Corry would be bumped out to shorten the distance pedestrians have to walk, and stop signs would be used for that four-way intersection.

“Xenia Avenue at Corry Street is a difficult crossing for pedestrians,” Blau said. “To remedy that, we recommend adding high visibility crosswalks and curb extensions to tighten up those angles.”

Also in the downtown area, the plan calls for more bicycle parking, including for bicycles with trailers.

“That’s a great problem to have because it means people are taking bike trips,” Blau said. “But if they don’t have racks at the end of their trip, it discourages them.”

Blau also spoke about a “pace car program,” in which drivers would affix stickers to their car touting their courteous driving, and gathering more data by making regular bicycle and pedestrian counts.

And recommendations for the area surrounding Mills Lawn are aimed at improving school drop-off and pick-up. That includes making Walnut Street one way southbound, with a right-turn only at Limestone Street and angled back-in parking.

The plan was the latest local effort to address active transportation, following on the heels of a 2015 sidewalk study and a 2011 school travel plan, Blau explained.

“This is really building on those efforts. It’s trying to synthesize all of the data and move forward with recommendations.”

In an interview, Housh called the plan a “good collaborative effort” between the Village and local, regional and state entities, including ODOT, which now is aware of local plans.

“In the past people have made assumptions about what can and can’t be done, but ODOT is open to all kinds of things,” Housh said.

Housh summarized the ultimate goal for many of the downtown improvements.

“The more we can slow people down coming through downtown, the better,” he said.

According to Housh, the three priorities are the Xenia Avenue downtown intersection, the crosswalk across Dayton at Winter and the suggestions around Mills Lawn, including a sidewalk the length of Limestone Street.

“It’s pretty exciting to see this all come together,” Housh said.

Spearheading the effort was the Yellow Springs Active Transportation Committee, which includes Housh and Eric Oberg, both of whom work for the Rails-to-Trails Conservancy; Chris Bongorno, a local transportation and community planner; Marcia Sauer of Village Cyclery; Karen Wintrow of the Chamber of Commerce; Gary Zaremsky of Bike YS; Jillian Drew of Greene County Public Health; Laura Curliss and Barbara Mann.

Click here to view the full report, an excerpt from the bi-monthly Village Council packet.