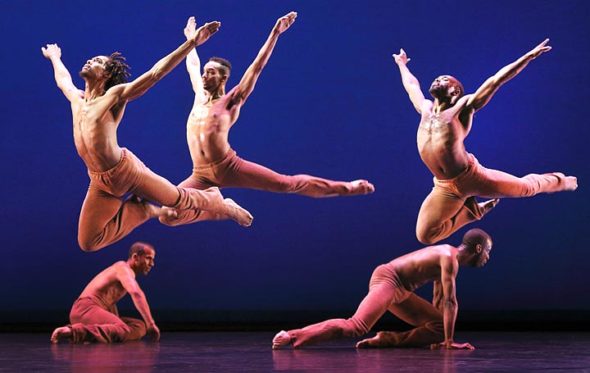 The Dayton Contemporary Dance Company is celebrating its 50th anniversary next week with a conference and festival in collaboration with the International Association for Blacks in Dance, which runs Jan. 22–27 in Dayton. DCDC is an acclaimed regional dance company praised for its groundbreaking choreography.
(Submitted Photo Courtesy of DCDC) 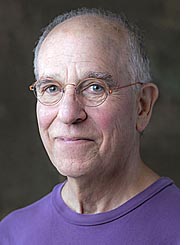 Villager Richard Lapedes will receive the International Association for Blacks in Dance’s distinguished leadership award at its international conference in Dayton next week, held in collaboration with the Dayton Contemporary Dance Company. Lapedes is the current board chair of DCDC and has been involved in the company for more than 35 years. (Submitted Photo by Andy Snow)

It was the late 1970s when villager Richard Lapedes and his wife, Maureen Lynch, went to their first performance of the Dayton Contemporary Dance Company, or DCDC. The small troupe, then performing in Blair Hall at Sinclair Community College, impressed Lapedes, who had just moved back to the Dayton area.
“It was like ‘wow, this is pretty great stuff,’” Lapedes recalled recently. “They were obviously highly trained — they were exactly in sync — [and] they had tremendous energy.”

A longtime supporter of the internationally acclaimed dance company and now the chair of its board of directors, Lapedes is being honored at DCDC’s 50th anniversary event next week, planned in collaboration with the annual gathering of the International Association for Blacks in Dance, or IABD, to be held in Dayton, Jan. 22–27.

Lapedes will receive the IABD’s distinguished leadership award, which honors excellence in community leadership, support, and dedication to the local arts community.

“Etched in Stone: Resilient Through Time,” the 31st Annual International Conference and Festival on Blacks in Dance will take place at various locations around the city throughout the week, with the awards gala to be held Saturday, Jan. 26, at 5:30 p.m., at the Crowne Plaza Hotel in downtown Dayton.

Founded in 1968 to create performance opportunities for dancers of color, DCDC remains rooted in the African-American experience and committed to the development of diverse movement artists on the global stage. The late Jeraldyne Blunden, a Dayton native who had trained at the Alvin Ailey American Dance Center in New York, started the regional company in an era when black performers were often not welcome on the traditional ballet stage.

As board chair, Lapedes takes these commitments seriously, working behind the scenes to ensure the company’s continued success. Lapedes became a supporter soon after his first introduction to the troupe.
“It is pretty easy [to decide to get involved] when you see something really good in a small Midwestern community,” he said. “It seemed worthwhile.”

Lapedes is grateful for the leadership award, but is more appreciative of the work of DCDC.

“When you get to be a certain age, if you’re focused on something in your community and you’ve stuck with it for many years, ‘thank yous’ come in all sizes and flavors,” Lapedes said. “I’m happy to be recognized in that way, but the point isn’t the recognition. It’s the way [DCDC] impacts the community.”
Lapedes is the retired CEO of Lion Apparel, a Dayton-based manufacturer of uniforms, and is also a sculptor with several exhibitions to his credit. He said his CEO experience has come in handy in his quest to keep DCDC in the forefront of American dance companies.

Lapedes said that whereas those with money “have historically given their money to traditional arts organizations whose content and roots come from Western Europe,” he finds that “very self-serving.”
“Supporting a minority arts organization is different,” he said.

While the company has sometimes had difficulty attracting local audiences beyond the black community in the Miami Valley, “they are on the national and world stage quite a bit,” Lapedes noted, adding that the troupe has recently been well received in China, Kazakhstan and Russia.

“They performed for three nights at the Bolshoi — the most famous theater in the world — three nights all sold out with curtain calls and standing ovations,” Lapedes said. “Dance critics at the New York Times have long applauded it with rave reviews,” he added of DCDC’s critical acclaim.

Tiffany Pittman, PR and marketing manager of the Maryland-based IABD, said that Lapedes is being given an award because he has made a significant impact on both the dance community and the Dayton area. She also cited fellow award-winner and company dancer Sherri “Sparkle” Williams, who is entering her 45th year with DCDC.

“Richard Lapedes and Sherri Williams have contributed to the community and DCDC, which is a large reason why they’re being honored,” Pittman said. Also receiving awards are Reginald Van Lee and Halifu Osumare.
The week-long conference will be a community affair, uniting the Dayton Art Institute, Dayton Convention Center, Dayton Metropolitan Library, Metropolitan Arts Center, Sinclair Community College and the Victoria Theatre.

According to Lapedes, getting so many arts venues on board proved to be one of the easier organizational tasks.

“The reason it wasn’t hard is because of DCDC’s reputation and that Dayton’s understanding of new and different cultural roots is expanding,” he said. An estimated 700 attendees are expected for the event.
Scheduled activities include a Dance Master Class Series, panels, workshops and dialogue sessions where aspiring dancers can speak with dance legends and next generation artists.

In addition, there will be auditions for scholarship and summer programs for students ages 10 to 18 and ballet auditions for men and women of color, according to Pittman. Most events are open to the public, Pittman added, and tickets for many performances and workshops can be purchased individually.

The theme of this year’s conference, “Etched in Stone: Resilient Through Time,” reflects the mission objectives of both organizations as they strive to preserve and promote dance by people of African ancestry or origin and increase opportunities for artists.

“DCDC is one of the five founding companies to create the IABD,” Lapedes explained. “Since it’s our 50th anniversary, and since our artistic director, Debbie Blunden-Diggs, is on their board, there was a mutual understanding that if the IABD was going to do their thing in Dayton, it would be for the 50th anniversary.”

Pittman and Lapedes hope that festival attendees will not only have an enjoyable experience, but also will develop an appreciation for the art and the work both organizations do.

“Our organization’s mission is to preserve and promote dance for people of African-American ancestry,” Pittman said. “What we like to highlight throughout this conference is dance excellence. We form a space where people can gather, learn, and engage in fellowship. We offer classes and lectures, and opportunities for the audience to witness and appreciate what we do.”

“Cultural ideas and content are not totally derived from the Western European traditions,” added Lapedes. “This is the signal of their arrival that isn’t based on the Western canon. It’s also a signal that the rest of the world is evolving and cultures around the world are evolving and Americans, even in the Midwest, need to take a good hard look at it.”

On a personal level, Lapedes said that watching DCDC performances brings him joy.

“Good art, no matter what it is, helps you come to an understanding of the world you live in, and it sort of makes a relationship with the world … and it’s very hopeful,” he said. “Our interpretation of contemporary realities transcends the limit of the individual.”

For a complete schedule of events and ticket information, visit http://www.iabdassociation.org or http://www.dcdc.org.
*Megan Bachman contributed to this story.

*Smith is a novelist and a freelance writer based in Dayton.