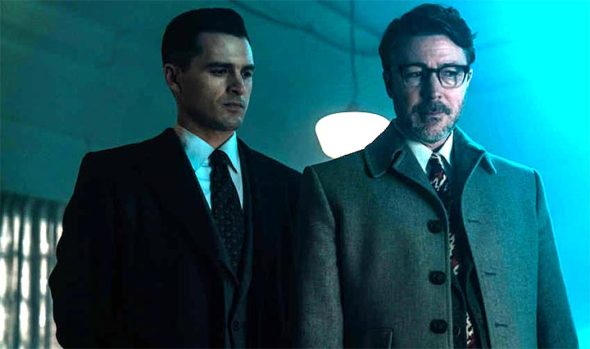 Within the first few minutes of “Project Blue Book,” a new show premiering next week on the History Channel, villagers watching may recognize two familiar sights: the ubiquitous acronym “WPAFB” emblazoned on an aircraft hangar, and the face of Michael Malarkey.

The actor and YSHS alumnus, who most recently starred in “The Vampire Diaries,” returns to the screen on Jan. 8 as an Air Force captain in “Project Blue Book.” The 10-episode History Channel program is based on a series of studies of the same name conducted by the U.S. Air Force on unidentified flying objects, or UFOs. Those working on Project Blue Book collected and analyzed thousands of reports on UFOs for 17 years, beginning in 1952.

Malarkey said in a recent phone interview that Quinn is loosely based on Edward J. Ruppelt, the real-life Air Force captain who spearheaded the project during its “glory years.” The project’s headquarters were close to home, at nearby Wright-Patterson Air Force Base. According to Malarkey, the showrunners for “Project Blue Book” didn’t initially know about his connection to the area when they were considering him for the part.

“My manager really started selling that point — ‘this guy’s from Ohio!’” said Malarkey. “I actually auditioned with a giant mustache from a cop show I was doing at the time, so I had to pull out all the stops to convince them I’m a down-home, Ohio boy.”

After landing the role, Malarkey began his research into the project itself with a trip to Wright-Patt, and by reading Edward J. Ruppelt’s UFO report book: “It’s massive, so I didn’t read everything, just what was pertinent to the show,” he said.

Captain Quinn, Malarkey’s character, is thrown into an initially uneasy partnership with astronomer and professor Dr. J. Allen Hynek at the behest of his superiors. (Hynek’s character is based on a real-life counterpart of the same name.) The two characters operate as foils when they meet for the first time to investigate a potential UFO sighting in North Dakota, with Hynek open-minded to the possibility of the supernatural, and Malarkey’s Quinn adamant that the government’s explanation — “weather balloon” — is the only one worth considering.

As the show progresses over the 10 episodes of its first season, however, viewers will begin to learn more about Quinn’s motivations, said Malarkey, and will see his character go through some dramatic changes.

“With people who go into the service young, they really give their life to cause and country,” said Malarkey. “I think [Captain Quinn is] completely dedicated to what he’s doing and is gunning for a position in D.C., but as he starts to unravel these mysteries and comes face-to-face with things he can’t explain, he starts to question what he’s doing — and whether he’s willing to be lied to.”

Malarkey, who considers this to be his biggest TV role to date, began his career on the stage. After growing up in Yellow Springs with his parents, Jim and Nadia Malarkey, he began his theatrical studies at the London Academy of Music and Dramatic Arts, and appeared in several National Theatre productions. He also originated the role of Elvis Presley in the musical “Million Dollar Quartet” for the West End stage. He said his theater roots have come in handy while working on the History show.

“Because [‘Project Blue Book’] is a period piece, I feel like I was drawing more on my experience with the stage,” Malarkey said, “as far as research and the muscularity of the role.”

Malarkey was drawn to the role of Captain Quinn, he said, because he appreciates variety in the characters he plays, and this was a new one for him.

“He’s got a strong moral code,” Malarkey said, “which I think is good and bad when you’re working in the service. The official character description said he was ‘debonair,’ so I found myself trying to strike a balance between the masculine jawline thing and the mind that’s always thinking — the wheels are always turning.”

Having come into the project somewhat blind on the history of UFOs in the United States and the government’s study of them, Malarkey said that his research for the role opened his mind to the possibility of extraterrestrial life.

“The more interviews from actual people I read, the more I can say for a fact that there are actually UFOs,” he said. “But is it actually intelligent life? I think so. I just don’t know what.”

Specifically, Malarkey cited the results of the project’s findings, which concluded, in 1969, that there was no evidence of extraterrestrial involvement in any of the reported UFO sightings — but which left more than 700 sightings unexplained.

“So many of those unsolved sightings came from Air Force people, scientists, professionals,” he said. “That’s the most harrowing thing to me — these are people whose jobs are on the line, and yet they’re still talking about it.”

For those villagers on the fence about checking out the program, Malarkey offered one fact that might convince them: “I’m in it!” he said, with a laugh.

In seriousness, he continued: “For those who are interested in the history of the subject, the show can give some good pointers about where to start their own research,” he said. “It’s also a very high-spec relationship drama with supernatural elements. I’m sure it will appeal to anybody who’s interested in scratching beneath the surface — and I think folks in Yellow Springs are.”