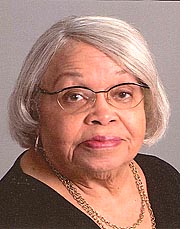 Villager Frances Smith has been honored for her longtime association with the Girl Scouts. She has also donated countless hours to local volunteer projects, including helping to launch the Yellow Springs Community Children’s Center and assisting the YSHS art department in upgrading its video program. (Submitted photo)

When Frances Smith was a child in Meridian, Miss., her mother pushed hard to start a Girl Scout troop for black girls. While there was no chance that the girls would be integrated into existing groups of white Girl Scouts, at the time there was not even a separate group for black girls. But Smith’s mother was determined to give her daughter the same opportunities her older brothers had, when they belonged to a Boy Scout troop for African-American boys.

While her mother ultimately prevailed, it took a while, and the group finally formed in 1938.
c
“It took her three years to convince the Council that little black girls could be Girl Scouts,” Smith said.

That event proved life changing for Smith. One benefit of being a Girl Scout was making new friends, and the friendships have lasted for life. Smith is still close to the one other surviving member of the troop, she said, and over the years the former Girl Scouts kept in touch.|

Being a Scout also helped Smith learn new skills, learn to work as a team, and have new experiences.

Even more significantly, her Girl Scout experience gave Smith a lifelong profession. In college she decided she wanted to work for the Girl Scouts. Her second job after college, as a Girl Scout field worker, turned out to be her lifelong profession, as Smith worked for the organization first in Meridian, then Cincinnati, then Dayton.

“Because I had such a good time as a Girl Scout, I wanted to give other girls the opportunity,” she said in an interview this week.

In 2002, Smith was recognized for her many years with Girl Scouts, when she was inducted into the Girl Scouts of Buckeye Trails Hall of Fame.

While Smith was recognized for her impact on the Miami Valley region, she’s also had a significant impact on her hometown of Yellow Springs, according to John Gudgel of The 365 Project, former longtime principal of Yellow Springs High School. And much of that impact, like her work with the Girl Scouts, involved helping young people.

“Frances has been an avid supporter of local young people in a variety of ways,” Gudgel wrote in an email this week.

One of those ways is the yearly scholarship given by the Smith family to a YSHS graduate interested in science, in memory of Shelbert Smith, Smith’s late husband and longtime chemistry professor at Central State.

But even before that, Frances Smith was looking after the needs of local young people, Gudgel said. Specifically, she was working with YSHS art teacher Melina Elum to upgrade technology at the high school, especially in the areas of photography, film and film editing.

“Frances spearheaded funding for students and classroom needs for students at YSHS and made herself readily available to meet with students. Her presence was sincere and always in the best interest of the young people. She was never interested in fanfare and has always been a steadying influence to our school community,” he wrote.

This week, the News spotlights Frances Smith in recognition of Black History Month, as she is one of many village African Americans who have made a significant impact on the community and the region.

Meridian, Miss., was an interesting place to grow up as a black child in the 1930s and 40s, Smith said this week. The town was most definitely a part of the South, and African-American children were well aware that they were not allowed to use the bathrooms in many buildings downtown. Also, they could only drink from the separate drinking fountains designated for blacks.

But they didn’t always do so. When she was a girl, Smith and her friends made a game of taking sips from the water fountain for blacks, and then the fountain for whites, noting that the water tasted the same.

And because her Girl Scout troop was the first troop for black girls in the Dixie Region –- which covered Mississippi, Louisiana, Alabama, Arkansas and Tennessee -– when Girl Scout leaders had a convention in Meridian, they asked the new troop members to sing. However, the convention was held at a whites-only hotel.

“We had to ride up in the freight elevator, but we got to sing,” Smith said.

But while blacks and whites were clearly segregated in Meridian, the town was slightly more progressive than most Southern towns, Smith said. And she has fond memories of growing up, with her mother a stay-at-home mom and her father the owner of a pool hall frequented by black businessmen, where she remembers the men arguing the issues of the day.
“I had a good growing-up,” she said.

Sometimes people tell Smith that they’re surprised she isn’t more bitter about racial issues, given that she grew up in the deep South. But she is not bitter, she said.

“My parents always told us we were just as good as anyone else, and not to let other people bother us,” she said. And so she believed them.

Smith left Meridian to attend Bennett College, a historic black college in Greensboro, North Carolina. It didn’t take her long to decide she wanted to work for the Girl Scouts, helping other children have the opportunities she had. So Smith majored in social work, later focusing on group work at the Atlanta School of Social Work.

After graduation, Smith was soon hired by the Girl Scouts in her hometown of Meridian. While many assume that working for the organization means leading troops of girls, it does not, Smith said. Rather, her work involved organizing adults to create new troops, and training the new leaders.

After three years, Smith moved on to a Girl Scout job in Cincinnati. But even though the city was in Ohio, it was the 1950s, and Cincinnati was just across the river from Kentucky.

“Cincinnati couldn’t decide if it was a northern city,” she said, of sometimes obvious racism.

Smith was hired on as a field staff person assigned to six neighborhoods, only two of which were black. When organizing in the black neighborhoods, she was treated with kindness and respect, she said, but in the white neighborhoods, that was not always the case.

“Sometimes I was treated well,” she said. “And sometimes people treated me like, ‘What are you doing here?’”

Smith’s life took a turn when, at a friend’s wedding, she met a young man named Shelbert Smith, from Chicago, a friend of the groom. Shelbert was in the process of interviewing for jobs teaching chemistry at two colleges, Fisk University in Tennessee, and Central State University in Ohio.
At a long party after the wedding, Frances pointed out to Shelbert that if he took the Central State job, the two of them could keep partying. He took the Central State job, and a year later, in 1958, they married.

The newly married couple moved to Yellow Springs after hearing that an African-
American developer, Omar Robinson, was building a new neighborhood of homes for black families. The Smiths purchased a house, and were the second family to move in to Omar Circle. They had two children, a daughter, Tammy, and a son, Lynn.

The neighborhood was a wonderful place to raise children, Smith said. Kids knew they could roam freely, as long as they didn’t leave Omar Circle. With about 40 families living on Omar Circle, there were always kids to play with. And while some of the moms worked, there were always moms at home to keep an eye on the children.

“We all became friends,” Smith said of the neighborhood. “Oh, we had a good time.”

Omar Circle is now integrated, but the sense of community has diminished, Smith says. She feels the same difference in Yellow Springs as a whole, she said, noting that sometimes when she goes downtown to shop, she sees few people she knows.

“I feel the change,” she said. “I don’t feel the sense of community.”

When her children were little, Smith stayed home for 10 years. Used to the world of work, Smith channeled some of her energy into volunteering in the community, helping Gene Trolander launch a new children’s center. She also volunteered with the Girl Scouts, of course, along with working with United Way and the Wilberforce chapter of The Links, a national organization of professional women of color.

Still, when Smith received a call asking if she would take a social work job in Dayton that suddenly opened up, she said yes.

“I was called on a Friday and was back to work the next Monday,” she said.

Smith later moved back to the Girl Scouts, this time in Dayton. She stayed at that job for 19 years.
“I like people, and enjoyed what I was doing,” she said of the Girl Scout work. “It’s a fun job that also has a purpose.”

One villager who benefited from Smith’s Girl Scout work is Peggy Erskine, who started a Girl Scout troop in town in 1960, when Smith worked for the organization in Dayton. Erskine remembers Smith as a good trainer and a supportive Girl Scout professional, always willing to answer questions or address problems.

At home, Smith was supported in her work by her husband. The two had a good marriage, she said, enhanced by each respecting the other’s work. They enjoyed each others’ company, but because they had met when they were in their late 20s, they also each had a strong sense of self.

Smith retired in 1991. Since then, she has continued her volunteer efforts, initially becoming more active in her church, Central Chapel AME. She also stepped up her volunteer efforts at the high school, working with art teacher Melina Elum in upgrading the school’s video technology, which resulted in a new video program.

In 2007, Smith was honored by the Wilberforce Alumnae chapter of the Delta Sigma Theta sorority as Woman of the Year, with recognition of her community service.

Since her husband’s death in 2008, Smith has been involved each year helping to choose a student interested in pursuing the sciences, to receive a scholarship in Shelbert’s name. She has continued other volunteer efforts, including for the Friends of Payne Seminary. She is also close to family, as her daughter, Tammy, lives right down the street and her son, Lynn, lives in Kettering.
There have been hardships as well. Along with her husband’s death, Smith has endured her son’s injury and gradual recovery after a bomb exploded at the Olympics in Atlanta that he was attending. Hardest of all, Tammy’s daughter, Arla, then a student at Yellow Springs High School, was killed in a car accident about 15 years ago.

“We’ve had our ups and down,” Smith says of her family.

But she continues. While Smith jokingly answers the question of what she likes to do with the response, “As little as possible,” she continues efforts to benefit the community, if in a less strenuous way than in the past. There are pleasures to having a quieter life, she said, including that she can do what she wants, when she wants.

And Smith is not eager — in fact, she’s not willing at all — to reveal her age. People have a tendency to marginalize older people, especially older women, she believes, and she doesn’t want to be limited by others based on her age.

And it’s clear it would be a mistake indeed, for any reason, to underestimate Frances Smith.

One Response to “A life serving Scouts, village”