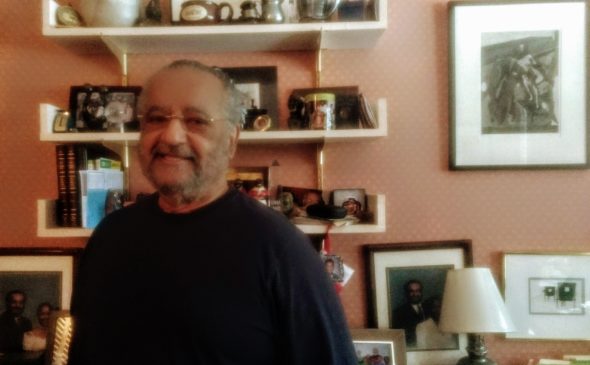 Dr. John E. Fleming in his office at home on Corry Street. Fleming is currently working on establishing the National Museum of African American Music in Nashville, Tenn., which is set to open next year. The museum will be the last major project for Fleming before he retires.

Dr. John E. Fleming’s office at his home on Corry Street is a testament to his decades-long body of work: the walls are decorated with art by celebrated African-American artists, and his bookshelves are packed with books. Numerous plastic bins of papers and photos are neatly stacked against two walls. He sat comfortably in his office discussing his life’s work during a recent interview.

“Just about everything in the office here relates to the museum in Nashville,” he said.

The museum is Fleming’s latest project, the National Museum of African American Music, to open in Nashville next year. He also says it’s his last — after nearly 40 years of dedicating his time and knowledge to establishing and directing museums, Fleming plans to retire after the Nashville museum opens.

Over his decades of work as a historian and museum director, Fleming has established, directed and supported the National Afro-American Museum and Cultural Center in Wilberforce; the National Underground Railroad Freedom Center and the Museum Center at Union Terminal in Cincinnati; the International African American Museum in South Carolina; and the Mississippi Civil Rights Museum. He’s also consulted for nearly two dozen other museums — including the National Museum of American History at the Smithsonian in Washington, D.C. — and he was appointed by President George W. Bush to the National Museum of African American History and Culture Plan for Action Presidential Commission.

His interest in history — particularly African-American history — was sparked by his grandfather, who lived next door when Fleming was growing up in Morganton, N.C., in the 1950s.

“He was always talking about family history and he knew the history of the first African [of our ancestry] who had come over, and he knew his name — Tamishan,” Fleming said.

Tamishan, an African Muslim man of noble birth who spoke seven languages, was enslaved by Morganton lawyer Waighstill Avery and put to work on Avery’s Swan Ponds plantation. After marrying and having a son in Morganton, Tamishan convinced Avery to let him return to Africa in exchange for sending back four Africans in his stead.

“When [Tamishan] got to Africa, he went ashore and got $400 in gold dust and gave it to the ship’s captain and said he couldn’t sell his people into slavery, and to give the gold dust to Waightstill Avery,” Fleming said.

Though his love of history began early, Fleming conceded that his life might easily have gone in a different direction. After graduating from high school, he attended Berea College in Kentucky, ostensibly to become a minister and missionary. He changed his mind, however, after working with the Peace Corps in Malawi, Africa, and observing the work of missionaries there.

“They talked in [the U.S.] about what a great sacrifice they were making, but they were living very well, living above the people they tried to serve, and they were really pretty mean and ugly and harsh to the people they were serving,” said Dr. Fleming. “That ended all efforts in terms of becoming trained to become a minister.”

“My career could easily have gone in the area of civil and human rights — but then I decided to go to grad school,” he said.

Working for the Institute for the Study of Educational Policy at Howard University in D.C. while he earned his M.A. and
Ph.D., he met the president of Central State University, who recruited him to help plan and open the Afro-American Museum in Wilberforce. Fleming, along with his wife, Barbara, and their children, Tuliza and Diara, moved to the village in 1988 to be closer to the museum after it opened.

The rest — naturally — is history.

Dr. Fleming’s final museum project in Nashville is, in his opinion, going to be in an ideal location. Currently under construction at Fifth and Broadway in the city’s downtown area, it will be situated in a city center complex that houses a hotel, offices, shops and restaurants, and Fleming thinks folks will be be surprised to see it there — and ultimately intrigued.

“We developed this museum to tell the history of African-American music within its historical context,” he said. “If you’re interested in blues, for example, you’ll understand that blues had its roots in slavery and the post-Jim Crow south, and how blues influenced gospel and jazz and R&B. We’re dealing with five major genres and how they’re inter-related — even when you get to hip-hop, there’s a relationship to earlier forms of music.”

The museum’s collection is currently being housed by the Country Music Hall of Fame, the Barbershop Harmony Society and the Ryman Auditorium. Planned permanent exhibits include “Wade In the Water,” a gallery documenting the history and influence of gospel music; “Crossroads,” focusing on blues; “A Love Supreme,” documenting the development of jazz; “One Nation Under a Groove,” all about rhythm and blues; and “The Message,” which will be dedicated to the history of hip-hop and rap.

Fleming said he’s also working on a temporary exhibit for the museum, which will detail the history of the Fisk Jubilee Singers, formed in 1871 at the Tennessee HBCU, Fisk University. The Singers gave tours internationally at the end of the 19th century to help raise money to save the school from closing, and were ultimately successful.

Fleming’s younger daughter, Diara, a lawyer, has been working with her father on the Nashville project as part of the exhibit team, collecting, identifying and securing the rights to use photographs in the museum’s exhibits. His elder daughter, Tuliza, is art curator for the National Museum of African American History and Culture in Washington, D.C. After relaying these facts, Fleming laughed.

“One of the things my kids said as they were growing up was that when they left home, they never wanted to go to another museum,” he said, and shrugged.

Though Dr. Fleming intends to slow his involvement with his chosen field after the Nashville museum opens next year, there are no outward signs that any change of pace is occurring — at least, not for now. During the brief interview for this piece, he received a few phone calls from colleagues, as well as a visit from an Antioch College graduate who’s helping him archive his collection of photos.

His volunteer work takes up almost as much time as his professional work, he said. He was recently elected the chair of the American Association for State and Local History, after serving two years as vice-chair. He’ll serve another two years in this volunteer position, before serving a further two years as the immediate past chair. He also volunteers with St. Vincent de Paul and the Dayton International Peace Museum, and he’s a member of the McKee Group and The 365 Project.

He said that, though he hasn’t had the opportunity to be very involved, he’s also been a member of the Yellow Springs Historical Society for years — “For some reason, during most of the meetings, I’ve been doing something,” he said — and that he’s been happy to be involved with the committee that’s helping to establish a sculpture of Wheeling Gaunt in the village.

It’s this kind of work — volunteer work — that Fleming is looking forward to focusing on in his retirement years.

“Volunteer work, I think, is a little different,” he said. “You just do what you like to do — as opposed to doing what you have to do.”

Until that time arrives, the only real evidence that Dr. Fleming’s decades-long career is coming to a close can be found in what’s missing from his home and life — he’s recently begun downsizing his collections.

“Unfortunately, I acquire things,” he said. “I hold onto things. I really feel like I’m more of an archivist.”

To that end, he has donated his personal papers to Duke University’s John Hope Franklin Research Center.

“When the archivist came up, he left with 65 archival boxes of materials,” he said. “I have about 25 more that are about ready to go. And I’ve given half of my clothes to St. Vincent — I’m trying to get my wife to do the same thing!”

Leaning back in his office chair, he looked at his bookshelves, still full of books — some of which he’s written.

“Yes, you can acquire a bit of stuff,” he said. “But my great desire is to donate all of it.”