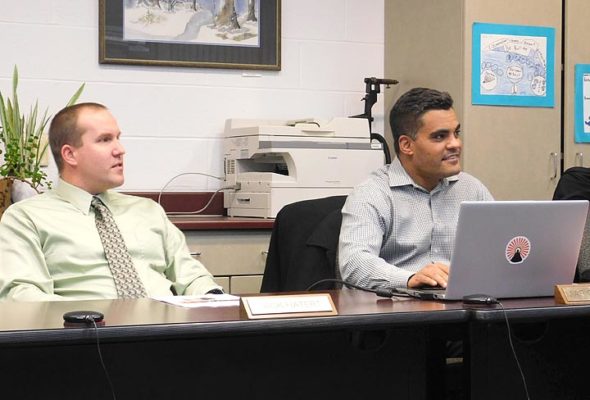 From left, YSHS/McKinney Interim Principal Jack Hatert and Superintendent Mario Basora at last week’s school board meeting. Basora is heading to a job in Huber Heights, while Hatert has applied for the principal position at YSHS/McKinney. (Photo by Gary McBride)

The hiring process for a permanent principal for Yellow Springs High School and McKinney Middle School to replace interim principal Jack Hatert next year was a main topic at the Yellow Springs Board of Education’s Feb. 14 regular meeting.

In his report, Superintendent Mario Basora said “a lot of really high quality candidates applied.” Among the 22 applicants, there was one very familiar name.

“It’s a little odd because I’m sitting right next to one of the candidates,”
said Basora with a laugh, referring to Hatert seated to his right in the board meeting.

At the time, Basora himself was a candidate for a new job as Superintendent of the Huber Heights School District. That district announced Basora’s selection a few days later on Feb. 19. (See article on this page.)

The vacancy is a result of former Principal Tim Krier being placed on administrative leave after a family member was at the center of sexual misconduct allegations by fellow YSHS students. Later, Krier and the district came to an agreement that Kreir would resign effective April 22, 2019. Jack Hatert has served as interim principal since Krier was placed on leave.

The YSHS/McKinney principal selection process began after the Feb. 14 board meeting. As of Tuesday, the list had been narrowed down to six candidates (in alphabetical order by last name):

Basora indicated that formal in-person interviews would begin as soon as Feb. 20 to narrow the group down to three candidates. Background checks will be initiated on the final three candidates at that point.

The candidates will also be given instructions for preparing a presentation and to spend a day at the schools for final evaluations.

Final evaluations will be conducted on March 11, 12 and 13. One candidate will come each day for a marathon evaluation process.

Basora invites the entire community to get involved, and encourages people to attend the public presentations on March 11, 12 and 13, at 7 p.m. in the YSHS library.

“It’s super-important to have folks there,” Basora said.

At 8 a.m. each day, a candidate will start with a presentation to the high school/middle school staff, who will then proceed to give an evaluation at the end of that presentation, Basora explained.

The morning presentation will be followed by some practical situation evaluations, including a mock parent meeting, during which a person will portray a “parent” who is angry about an issue, and the candidate must find a way to resolve the problem.

There will also be a mock teacher evaluation, where the candidate will observe a teacher in class, and have a post-conference with that teacher to provide feedback and evaluation. These sessions will be observed by Basora and Matt Housh, principal at Mills Lawn Elementary, and possibly other administrators.

The candidate will move on to lunch with faculty, where the teachers get to ask questions freely. This will be followed by a meeting with a panel of students, ranging from juniors to seventh graders, who will interview the candidates.

“We have a good combination of kids I think who are really with it and have a good sense of what they’re looking for in a principal,” Basora said.

Basora and others will give the candidate feedback on the day so far and their interactions with the teachers and students.

In the evening, the candidate will present to the community followed by an open Q&A with attendees, who will fill out an evaluation of each canddiate.

“I understand it’s a really intense day, but that’s the day of a principal,” Basora said. “I know it’s tough, but we’re looking for someone who is tough and can really handle the job,” he added.

Then, on Thursday, March 14, Basora will meet with select teachers and administrators to select a finalist.

“We’ll have an executive session of the board that night, and will hopefully be ready to make some decisions,” said Basora.

Other topics from the board’s Feb. 14 meeting will be covered in an upcoming issue of the News.