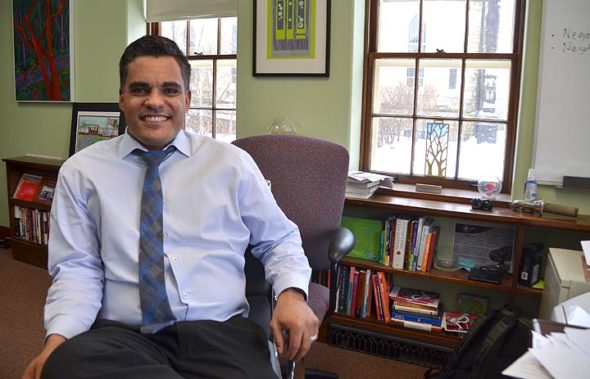 After nine years as superintendent at Yellow Springs Schools, Mario Basora will leave for the top district job in nearby Huber Heights. (Photo by Megan Bachman)

After nine years at the helm of the local school district, Yellow Springs Schools Superintendent Mario Basora will leave for the top district job in nearby Huber Heights.

The Huber Heights school board unanimously approved the hiring of Basora as their new superintendent at a special meeting on Feb. 19.

Basora will finish the 2018–19 school year in Yellow Springs and work here until the end of July. He starts at Huber Heights on Aug. 1.

In an interview this week, Basora said he is excited for the new challenge of a much larger, and more diverse, district. At close to 6,000 students, Huber Heights Schools is eight times the size of Yellow Springs Schools.

In addition, Huber Heights was attractive as a growing district with “intriguing challenges,” and is one of the most ethnically diverse in the Dayton area, Basora said. It was only the second time that Basora applied for another job during his time here, he added.

“I would not have left the district if Huber Heights didn’t have a great school board and a great district,” he said.

Basora said he has no plans to move out of the community and Huber Heights is not requiring him to move. Basora and his wife, Alice, have two children in Yellow Springs Schools; Carina is currently a high school freshman and Mateo is in fourth grade.

Basora became the local superintendent in 2010 and led the district’s transition to project-based learning, or PBL, a transformation that Basora counts as one of his proudest accomplishments. That process involved working with teachers to “challenge the traditional methods of instruction,” Basora said.

“We worked together to rethink what it would be like to add experiential learning  and more hands-on ideas and inquiry into our work,” Basora said. “I’m proud of our teachers for taking that risk to do that for our kids.”

In part because of its distinction in PBL, Yellow Springs shouldn’t have a hard time attracting quality candidates for the position, Basora believes.

“Because of the work our teachers have done, we are on the map in terms of education. We have a reputation as an innovative school district,” Basora said.

The process to find a new supierintendent will likely get underway in the next two weeks, Basora added.

Basora also faced his share of challenges as superintendent, including the defeat of a facilities levy by a wide margin last year and the extended leave of the high school/middle school principal after the principal’s family member was at the center of sexual misconduct allegations. This week, Basora declined to comment on the role either may have had in his decision to leave Yellow Springs.

Looking ahead, Basora sees that his successor in Yellow Springs will also have to overcome challenges, the most significant likely being the facilities needs of the district.

“The need is real and the next superintendent will have to find a way to bring the community together around a solid plan,” Basora said.

The new superintendent would also benefit from a “good understanding and appreciation of the unique culture of Yellow Springs,” Basora added. They will likely kick off their tenure with a new strategic planning process, as it’s been 10 years since the last one.

“It will be a chance for that person to come in and maybe PBL goes away, or evolves or strengthens,” Basora said of that process. “It would be a good time to get the pulse of the community now.”

Asked if he would offer any advice to his successor, Basora suggested taking an active role in town and listening to villagers.

“Be patient and transparent and really try to pay particular attention to the process,” he said.

As for his professional experience in Yellow Springs, Basora reflected that overall he has loved his time here, and that the job came with the “highest highs and the lowest lows.” Ultimately, the educator has had an education.

“I think what I’ve learned is that democracy is messy and it’s not easy and you have to stay focused on the mission, and focused on the kids,” Basora said.

“I learned the value and importance of being visible,” he added. “Every decision I make, there will be people who will like it or don’t. Being visible helps people remember you’re a human being.”