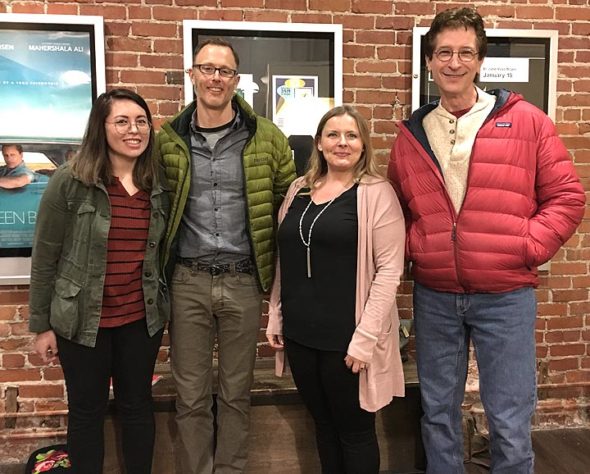 Last month, Villager Paul Beck came to the screening of “Weed the People” to learn more about medical marijuana.

Fifteen years ago, Beck was seeking a diagnosis for pain in his feet and hands. His neurologist identified the source as peripheral neuropathy.

“I said ‘Hallelujah, now what do you do about it?’ [My doctor] didn’t have the slightest idea,” Beck recalled.

So Beck was prescribed pain pills, and while they helped with his pain, he found they left him unable to feel anything.

Hearing Beck relate his experience before the film screening, Teaera Roland, owner of Lotus Health in Mason, told him that cannabis may be an option for his ailment.

Roland indicated that while peripheral neuropathy is not included as a condition that would qualify a patient for medical marijuana in Ohio, the fact that Beck has had long-term pain may be a route to a recommendation.

“Cannabis, while treating your pain, will actually increase brain function and help with focus,” Roland explained.

“My brain is 85 years old, but it still works” Beck replied.

Roland, a nurse practitioner, is one of several Ohio medical professionals who have examined the benefits of medical marijuana, and believe doctors should move past the stigma and stereotypes and start taking it seriously as a beneficial medication.

Lotus Health has been sponsoring screenings of “Weed the People” in the area to promote the legitimacy of medical marijuana, along with their office practice — a full-service clinic offering medical marijuana evaluation and consulting based on Roland’s 13 years of experience and education.

“It’s something I have been passionate about for quite a while,” said Roland, who has so far seen about 400 patients interested in medical marijuana.A serious documentary that chronicles five families fighting childhood cancer, “Weed the People” looks at how each family used medical marijuana as part of their treatment regimen and their outcomes.

In Ohio, medical marijuana is approved for patients who have a variety of conditions, including cancer, AIDS/HIV, multiple sclerosis, Crohn’s disease,  epilepsy and seizure disorders, Alzheimer’s disease, Parkinson’s disease, fibromyalgia and others, including chronic pain. One role it plays is as a palliative measure to mitigate nausea, appetite loss and other side effects of treatments such as chemotherapy, according to doctors.

Proponents like Roland argue that it’s effective for a far wider variety of health problems, such as diabetes, depression, anorexia, endometriosis and many others.

“Nobody ever just has pain. They may also have diabetes for example, so there are certain [medical marijuana] regimens for diabetes,” she said.

Roland relishes the success her patients have experienced using cannabis.

“My high is when we get people free of their pills. Tumors go away or shrink. Or all of a sudden they don’t need their walkers anymore,” she said.

Ohio’s medical marijuana program is finally off the ground, but there’s still much work to be done to bring it into the mainstream of medical treatment options, according to the medical professionals interviewed for this story.

“From my perspective, this is a great opportunity to get cannabis on a rational and legitimate footing, so that doctors take it seriously as medicine,” Leeds said recently. “Right now, the problem is, that a lot of them don’t.”

Leeds is an assistant professor of family medicine at the Wright State Boonshoft School of Medicine, as well as a researcher and a doctor at Wright State Physicians Family Medicine, and is certified to make medical marijuana recommendations.

Leeds is currently working to address the skepticism many doctors have toward medical marijuana. He is heading up a project called “Rational Cannabis Prescribing” to provide doctors with objective scientific information on how to best use medical marijuana in treating patient health conditions.

According to Leeds, since marijuana is still federally classified as a Schedule I drug, the strictest classification (the same as heroin), there are limited opportunities for research. Also, most previous studies have set out to demonstrate harmful effects rather than find beneficial uses, according to Leeds.

In September 2016, when the Ohio law was passed legalizing medical marijuana, Leeds immediately began looking for all the data and information available.

“I started reading the ‘classics’ in the field, like ‘Cannabis Pharmacy’ by Michael Backus,” Leeds recalled. But in reading the books, he was unable to find citations, reference or sources for most of the assertions.

“A lot of it turned out to be lore, all anecdotal,” Leeds said. “It’s the kind of thing, in medicine, that would be considered the bottom of the basement lowest level evidence.”

“The plural of anecdote is not data,” he said, citing a widely used aphorism.

One of the problems Leeds has seen in other states that have medical marijuana is that the vital job of recommending specific forms, strains, potency and dosages falls to dispensary agents known as “budtenders.”

There is no state-approved certification for budtenders in any state yet, as medical marijuana is still federally illegal, according to Hempstaff.com. There is no medical education required to be a budtender, just a high school diploma. Dispensary companies offer in-house training and there are various unofficial “budtender certification” programs.

Leeds feels that until specific chemical make-ups of various cannabis strains, known as chemoprints, have been identified and tested, the budtender’s job is basically guesswork.

“The truth really is that the patients know more about this stuff than most doctors do,” Leeds said. “That’s the whole basis of the Leafly and Potbotics websites, they’re based on patient reports.”

Those websites allow individuals to provide reviews and anecdotal information about how certain types, forms or doses of cannabis worked with their medical conditions. Leeds sees this “crowdsourced” research as both problematic and -promising.

“That’s problematic when it comes to the quality of data, but I still think there’s something in there,” Leeds said.

As part of his project, Leeds has a statistician working with him to analyze the information on various marijuana-related websites. He is also working to design studies that make medical marijuana “a more rational, legitimate enterprise,” he said.

Despite his advocacy, Leeds has issued very few medical marijuana cards — under 20, with no recommendations. He has told patients that he’s not going to write recommendations until local dispensaries open and he knows what products they’re offering.

Ohio currently has eight dispensaries open for business, all in the eastern part of the state. Over 50 have been licensed statewide. The distribution is based on population, with 15 allocated to the Southwest region of the program. Locally, Montgomery County will have three. Greene, Madison and Fayette counties will share just one, Harvest of Ohio, in Beavercreek, near The Greene.

Ohio’s opioid crisis continues, but Leeds is among the doctors advocating a possible solution with medical marijuana.

Leeds sees “Opioid Use Disorder” as a strong candidate to be a qualifying condition for medical marijuana. In fact, Leeds successfully petitioned the state to consider adding opioid use disorder to the approved list in its next session.

One reason Leeds favors cannabis is its “benefit to risk” profile. Potentially great benefits with virtually no risk, he said.

“Now here’s a drug that may be our best shot at replacing opioids for pain management, and it kills nobody,” he said. “You can’t really die from a cannabis overdose.”

According to Leeds, there is a lot of promising preliminary data that cannabis does benefit opioid-dependent patients, both in terms of preventing opioid-use disorder and treating withdrawal, as well as in helping with abstinence from opioids.

Leeds referred to a 2014 study published in the Journal of the American Medical Association indicating that states that have legalized medical marijuana have statistically fewer opioid overdose deaths, and the longer the states had allowed it, the fewer deaths there were.

According to the study, there were fewer hospital admissions for opioid abuse in medical marijuana states, and fewer automobile fatalities involving opioids.

“And this may be the most exciting thing — just fewer opioid prescriptions,”  Leeds said.

“It was clear that cannabis had an opioid-sparing effect,” Leeds added, referring to the study. “On an individual basis, patients were reporting that when they were using cannabis they were able to get by using less opioids, and in some cases getting off opioids all together.”

The opioid problem in Ohio has gained widespread attention, blamed for 4,293 overdose deaths in Ohio in 2018, the second highest rate per capita after West Virginia, according to a recent report from the U.S. Centers for Disease Control and Prevention.

Dr. Josh Short of Stillwater Medicine in Mason agrees that marijuana could play a role in preventing opioid deaths. Short, who works in conjunction with Roland’s clinic advising patients about medical marijuana, took part in the Q&A session after the “Weed the People” screening.

At the screening, Short said he has worked as an ER doctor and has seen first-hand the damage opioids can cause, and sees the potential for medical marijuana to help.

“The leading cause of nontraumatic death in the United States under the age of 50 is currently prescription narcotics — not heroin,” Short said.

Short recalled a patient who wanted to stop taking OxyContin by using marijuana. The patient had asked his regular doctor, who said that he was not comfortable with the idea. Short says this is a common reaction and is understandable among doctors who have no experience with cannabis.

“It amazes me to see, study after study, that states with medical marijuana programs have 25 percent fewer deaths from prescription narcotics, and still we have this culture within Western medicine that believes if it’s not a pill manufactured in a factory, we can’t really suggest that you do it,” Short said at the screening.

According to Short, cannabinoids are better for chronic pain management than any other drug.

“If you’re going to be treating pain for a long time, I don’t know that anything else will be as effective and as safe,” he said.

The longer someone uses narcotics, the more they require to achieve the same effect over time, according to Short. Cannabis does not require increasing doses to remain effective, he added.

“That’s where the dangers of narcotics come in. If you fill all your pain receptors with a narcotic, your body makes more pain receptors,” Short said. “That means you need more and more narcotics to prevent pain. Cannabinoids are different.”

During the Q&A, Roland said that with cannabis, pain relief is just the beginning.

“The full plant, that’s really the medicine,” she said. In addition to cannabinoids, the full plant offers natural antiviral, antibacterial and antifungal properties, she explained.

“It’s extremely complex, and different types of marijuana are going to help different things,” she continued.

With more dispensaries opening around the state in the coming weeks, and a wider variety of product forms available, it remains to be seen how much the list of recommending Ohio doctors will expand beyond its current level of about 400.

Ohio already has over 17,000 approved medical marijuana patients, or cardholders, with the number predicted to eventually reach as many as 300,000.