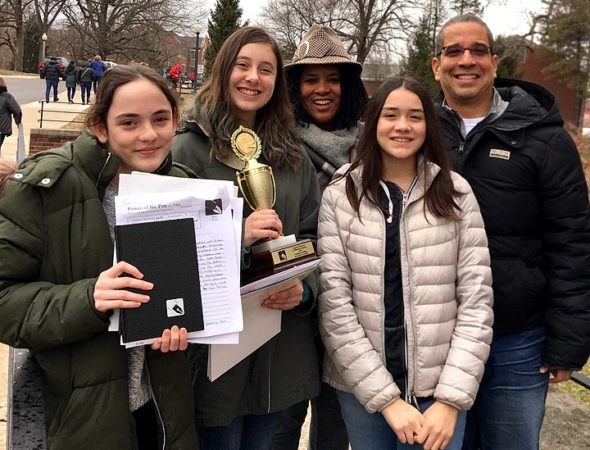 McKinney at Power of Pen regionals

The eighth-grade McKinney Middle School Power of the Pen team competed in the Western Regional Tournament held at Wittenberg University on Saturday, March 9. Three eighth-grade writers — Dani Bieri, Sylvia Korson and Olive Cooper — competed; Ava Vescio, who qualified for the regional tournament, was unable to compete due to illness. Korson — who almost missed the tournament due to her own illness — received the second-place individual writing award for eighth grade, besting all but one other eighth-grader in the 35-school tournament.

District tournament awards were also presented on Saturday, with Cooper receiving two best of round awards — there are three rounds of writing — and Korson receiving the Director’s Choice award for the district tournament. Writers who qualified at Saturday’s regional tournament will move on to the state tournament held at The College of Wooster on May 24. The team is coached by Jaime Adoff and Aurelia Blake.

Topics: power of the pen