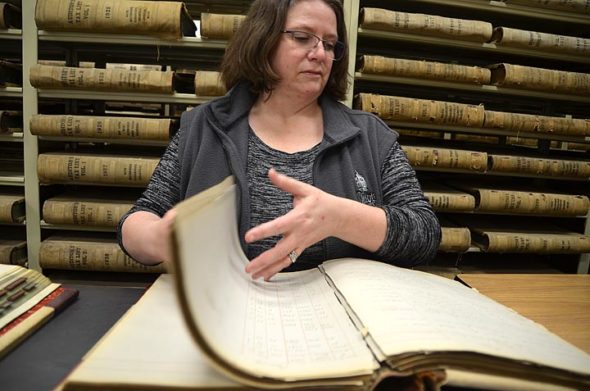 Adventures of an archivist — Letting the volumes speak

There’s hidden treasure in Xenia, if you know where to look. Under the unassuming green awning of a converted shopping center on Ledbetter Road, a few doors down from the BMV, is the Greene County Archives. That name — the Archives — might not suggest intrigue, but for those with a passion for the past and with no fear of digging, it can be a trove of historical exploration.

This is especially true for Records Manager and Archivist Robin Heise, who heads up the archives for the county, and who lives in Yellow Springs. She recently led a tour around the facility for the News, and as she navigated through the bound volumes, maps, boxes, photos and microfilm, her enthusiasm for the records she has been tasked with safeguarding was conspicuous.

“I absolutely love it here,” she said, affectionately eying a map, hanging outside her office, of 1855 Greene County — or most of the county, anyway, as part of the map has deteriorated along its fold, excising Yellow Springs.

The archives were established in 1996, and were originally housed in a building on Main Street in downtown Xenia; that building was demolished in 2012. The archives are comprised of records that date back to 1803, when Greene County was founded — and a few that predate the county itself. Heise said that many of the archives’ oldest records — like early births and deaths, surveyors’ maps and the grim-sounding “Record of Inmates” from the county’s orphanage, the Children’s Home — were pulled from basements, closets and outbuildings. In some cases, records were found in the Xenia clock tower — which explains the title of the archives’ weekly blog, “Out of the Clock Tower.”

“Our whole goal is to preserve these records and make sure they’re stored properly,” said Heise.

To that end, the archives are equipped with humidity and temperature controls, and some old and fragile paper records have been de-acidified and encapsulated in plastic to keep them from breaking down any further. The archives also have a dedicated microfilm vault — “I use that term very loosely, because it’s essentially just a big, air-conditioned closet,” said Heise — for storing modern records.

When asked why the archives continues to maintain microfilm records rather than digitize them, Heise smiled knowingly.

“Technology changes all the time,” she said. “We used to have floppy disks — now we have thumb drives. Who knows what we’ll have in 20 years? You always want to make sure records are maintained in eye-readable formats, and there are only two of those: the paper itself and microfilm. Even if you don’t have a microfilm reader, all you need is a light source and a magnifying glass.”

In the room behind Heise’s office, however, the nonprofit organization Family Search, which is sponsored by the Church of Jesus Christ of the Latter-Day Saints, has been working for more than a year to digitize the county’s probate records. The organization requests access to records that they determine to have genealogical value, and then, with their own labor and funding, digitizes them. When their work is complete in Greene County, they’ll upload the probate records to their free family-tracking website and present a digitized copy of their work to the County.

“It’s really a win-win,” said Heise. “Though they did kind of laugh at us — because we’re getting the digital image, but down the road, we’re actually going to convert them to microfilm. I guess we’re kind of doing things backwards.”

The website also has resources for students and educators as part of an elementary and middle school program that teaches the importance of historical records and primary sources. Within these resources, Heise pulled up the 1939 declaration of intention for a woman named Marie Treuer, who settled in Yellow Springs. The document includes a wealth of information: her birth date and place, her marital status and family, her job and her photo.

“This is an extraordinary document,” said Heise. “We can bring this into the classroom and talk about people settling in America and why they might have left their countries. And if this was your great-grandmother, you could come here and learn all of this about her.”

Heise said that working in the Greene County Archives is actually her second career: she was previously a higher education administrator, working as financial aid director at Antioch College. After Antioch’s 2008 closure, she took a job at Wright State University.

“So I thought, ‘While I’m here, I’m going to check out this master’s program in public history,’” she said. “And I fell in love with it.”

She came to the archives in 2011 as an intern and never left, eventually becoming the archivist in 2015. During her time here, she and her co-workers — Joan Donovan, assistant to the archivist; Melissa Dalton, public outreach coordinator; and Elise Kelly, multimedia archivist — have uncovered many stories that lie within the volumes they protect. Once, in her early days at the archives, she was working on preparing estate records, and on the back of one document, she found a note scribbled in pencil.

Using the records at her disposal, Heise and her colleagues discovered that the scribbled note pertained to a 19th century criminal case involving a Xenia bar fight that ended in one man shooting another. The accused was to stand trial — but the trial was delayed because he had enlisted with the Union Army to fight in the Civil War. When he returned, the charges were dropped from manslaughter to assault and battery. Ten years later, the same man ended up in another drunken bar fight in Clinton County — and this time, he was on the other end of the gun.

“People might think that government records would be boring, but they’re not,” said Heise. “There are some really cool stories in here — but you have to dig to find them.”

She also noted the peculiarities of the collection, like murder scene drawings from the 19th century that were created, not by crime scene investigators, but by surveyors. Typically responsible for demarcating property boundaries, a surveyor might be called to employ their handiness with drawing up drafts when a crime scene needed to be documented and cameras weren’t common or practical. Greene County surveyor Washington Galloway drew the murder scenes of William Fogwell and Billy Fletcher — names thst might be familiar to fans of former villager Harold Igo’s ghost stories, which were published in the News in the 1940s. Fogwell and Fletcher appear in “The Ghost of the County Jail” and “Hamlet’s Ghost in Osborn,” respectively.

“Igo was only about 50 percent right in terms of factual accuracy,” Heise said. “But the stories are fun.”

Heise was able to connect the dots between the murder scene drawings and Igo’s stories because she has, in the past, led historical programs on Igo and other Yellow Springs historical figures as the founder — and sole operator — of YS Heritage, a local history program and blog. She was careful to point out that any research she does through the archives for YS Heritage is done on her own time.

“I’ll take a day off [at the archives] to come in and research,” she said. “I use my vacation time to do research for YS Heritage. So I’ll have to tell my coworkers, ‘I’m here, but I’m not really here!’”

She noted that YS Heritage is on a hiatus in 2019, which means she won’t be running any of her normal programming this year. The reason for the hiatus?

“I’m going to use my vacation time this year for an actual vacation,” she said. In the meantime, she’s looking for ways to make some of her historical findings available in a virtual tour format.

This year marks a particular cause for celebration for Heise and her fellow archivists, both in Greene County and across the state: After two decades of work by Ohio archivists and historians, House Bill 139 was finally signed into law this January. The bill’s aim was to widen avenues of accessibility to public records.

“There are certain records that, in one county, would be open, but in the next county, the same type of record was closed based on their local regulations,” said Heise. “That makes it difficult to do research.”

The bill proposed making these records consistently open in all counties across the state 75 years after their creation. The Greene County Archives worked closely with Rep. Rick Perales to make sure the bill passed through the House and Senate in 2018. On April 7 of this year, the law will go into effect, and many records that were previously sealed will be open to the public.

“The previous archivist worked on it for her whole career, and I worked on it nonstop since 2015,” said Heise. “As an archivist, I feel great — I want to make sure people have access to history, and now they do.”

Perhaps the best object lesson of this desire is the 1855 map of Greene County mentioned earlier in the story — the one that’s missing Yellow Springs. Though it’s incomplete, visitors to the archives will find a restored copy of the map hanging in the main research room. It’s intact today because it was saved by history lovers — the Greene County Room, Xenia Library’s historical archives, found a copy of their own, which was also damaged, but had Yellow Springs intact. Using the two incomplete maps, the archives and the Greene County Room, with the help of Ohio History Connection, were able to carefully scan the two parts and restore the map into one whole.

“That’s our job,” said Heise. “To make sure that these records are here for future generations.”

To find out how to get started on research in the archives, visit http://www.co.greene.oh.us/120/Archives.