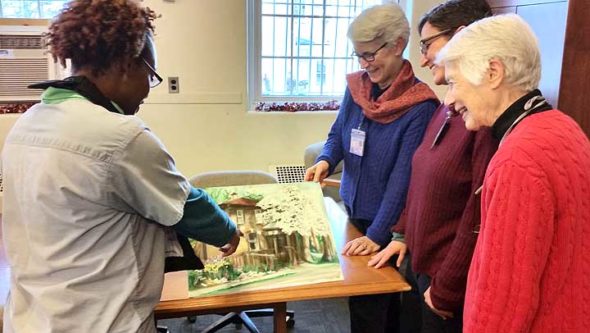 Katie Egart of the Yellow Springs Dharma Center is shown here, top center, with a Marysville prison inmate who presented her, along with Dharma Center members Donna Denman and MJ Gentile, with an original painting of the center in appreciation for the meditation group that Egart leads there. Egart, a Buddhist chaplain, travels to Marysville and to the Dayton Correctional Institute two times a month to hold a meditation session for interested inmates. (Submitted photo)

CORRECTION: The print version of this article erroneously described Katie Egart as a Buddhist priest. Rather, Egart is a lay Zen practitioner and an ordained Buddhist chaplain.

Whenever Katie Egart walks into the Dayton Correctional Institution, or DCI, she encounters locked doors. A door closes behind her when she enters an entry way that has another locked door in front. Guards search her, even though she’s a regular visitor. After going through another locked entry way, a guard escorts her to the prison chapel.

Egart enters the locked doors of the prison — which houses about 750 women — two times a month, to lead a group of about a dozen women in mindfulness meditation. While going to the prison is itself stressful, she finds doing so fulfilling.

“From the first time I walked in the prison, I felt this was the dharma gate I was meant to enter,” Egart said in a recent interview.

Egart is one of several villagers who volunteer their time at DCI; the News is spotlighting their activities.

What’s fulfilling to Egart is how many of the women in DCI have made a meaningful life for themselves, in spite of considerable obstacles.

“I’m so amazed at the resilience of the women there, how they are making a life in a place where there’s so little life to be had,” Egart said. “I learn from them.”

An ordained Buddhist chaplain, Egart leads the women in about 20 minutes of  silent sitting mindfulness meditation, followed by 10 minutes of silent walking meditation, then a short final sitting period. Then, the women talk with each other. Sometimes they speak about how their meditation practice is going, and sometimes about how mindfulness is affecting other areas of their lives.

“They talk about bringing mindfulness to ordinary tasks, like doing dishes,” she said. “Also, how mindfulness helps them realize that emotions will arise and then pass away.”

What the women don’t talk about is why they’re in prison, on offenses that can range from non-violent drug offenses to murder. Many were caught up in crimes committed by partners or boyfriends, Egart said.

“Everyone is coming from a traumatic experience,” Egart said. “There are lots of people living together with no power, no personal freedom. It’s an incredibly stressful environment.”

Yet in the context of constant stress, the women in the mindfulness group have found some measure of peacefulness through meditation.

“Mindfulness practice is helpful to me because it helps ease away my anxiety,” one 30-year-old woman from the group wrote recently. “It calms me down when I feel overwhelmed. It helps me to let go of any negative thoughts that may cross my mind.”

And according to another participant, age 32:

“Mindfulness has helped me to realize, when I do something to take the time to pay attention to my feelings and breathing, like when I wash dishes or pray the rosary. I’m more mindful and appreciative when doing these, and other things.”

And a third woman, aged 27, wrote: “This practice makes me more aware of my daily life. I see a new beauty in the world around me.”

Finding some benefits in meditation doesn’t mean that it’s easy for the DCI women, Egart said. In fact, experiencing silence in prison, after the sort of traumatic events that these women have lived through, can be especially hard.

“Silence can be difficult and challenging,” she said. “Even though the women crave it, it can be uncomfortable.”

But in the group the women share their difficulties, and offer support.

“The women are great with each other,” Egart said.

What the DCI women are finding in the mindfulness group is similar to what Egart has found. About 25 years ago she discovered Buddhist meditation while searching for a way to transcend her own concerns, and instead be a positive force for others.

“I was asking myself, ‘What is this life?’” Egart said. “I wanted a way to develop more compassion, to benefit the world rather than causing more problems.”

Egart found that way in Buddhist teachings, also called the dharma by practi-tioners. Having come to Yellow Springs in the mid-1970s to work in the co-op department at Antioch College, she found like-minded villagers at the local Dharma Center, which was launched in 1993. The center offers twice daily meditations and teachings in three Buddhist traditions, Zen, Vipassna and Tibetan, as well as regular retreats and special programs. Egart has been part of the center’s leadership team since the late 1990s, and is a regular attender of Zen meditation on Saturday mornings, along with twice yearly Zen retreats.

“It’s been very helpful to have a community that supports each other in this practice,” she said.

Egart’s visits to the DCI are part of the Dharma Center’s Prison Initiative. The initiative began about seven years ago when a chaplain from the Marysville prison sought out Egart after an inmate there wanted to study Zen. A regular meditation group grew from this contact, and Egart still visits the Marysville prison about two times monthly.

In recent years she also, with the help of Mark French of the Dharma Center, attempted to establish a mindfulness group at the Madison prison in London, Ohio, although that group dissolved after a few years. And villager MJ Gentile will soon join Egart at DCI for the mindfulness group.

Recently, one of the members of the Marysville group, a young woman serving a life sentence, presented Egart and other Dharma Center representatives with an original painting of the center, as a statement of her appreciation for the mindfulness training she has learned from Egart. The painting currently hangs in the Dharma Center entryway.

Teaching meditation in prisons is a natural extension of Buddhist teachings, he said.

“What Buddhist teachings are all about is reducing suffering,” he said. “We know that people in prison are suffering, and we want to help.”

According to the written statements by the DCI mindfulness group members, the mindfulness training is easing the difficulties and stress on their paths.

“This class has calmed me a lot,” wrote a 38-year-old participant. “I feel relaxed and it teaches me to give myself a ‘pause’ button. Not to get away from the world but a chance to sit and focus.”

According to a 39-year-old woman:

“I’ve noticed that I’ve started to pause or catch myself before reacting or overreacting. I feel I’ve got much to learn and practice, though. It’s not as scary as it was at first.”

And a third woman, age 55, wrote: “It keeps me calmer, less likely to panic when things don’t go exactly right. Feel less stressed out and am able to be more accepting and patient about things in general. I feel more at peace, even in this environment.”