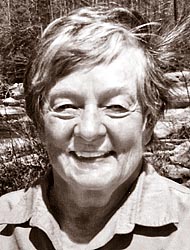 Helen Westneat was a lifelong teacher and librarian who taught thousands of students in schools from elementary age to college how to find just the right information.

But she is recalled as well for something decidedly less academic: giggling.

“She had such an easy ability to laugh,” says her husband of 60 years, Dave Westneat. “Her wry sense of humor carried us through many an absurd situation.”

Friends and relatives remember her as someone who was driven — but who didn’t take herself too seriously.

“She had an ethic about her — she was an achiever, especially academically,” said her sister, Anne Canterbury of Renick, W.V. “But she had no ego about it. She was a beautiful lady, inside and out.”

She met Dave, a chemist, in the 1950s when they both worked at the DuPont chemical company. They married in 1958.

Since then, in addition to raising three boys, she earned multiple teaching certifications, in reading and educational media, as well as a master’s degree in library science. She taught students with learning disabilities for more than a decade at Springfield Joint Vocational School, in Springfield, Ohio.  She worked as a librarian at that high school, as well as at Wilmington College in Ohio, Wright State University in Dayton, some public libraries — including the Dayton Library and the Yellow Springs Library — and several libraries in San Francisco.

Throughout, she delighted in helping students unearth obscure facts, or in figuring ways to cajole them to read. A good day was when she convinced a high school to subscribe to a hot rod car magazine, because it lured a non-reading student into giving it a try. It didn’t matter so much what you read, she felt, as long as you were reading.

She had this same persistent but forgiving approach to writing and grammar. Knowing the rules is important, but so is being able to break them — because sometimes the rules are ridiculous. She was fond of demonstrating this by saying, with great gusto: “This is something up with which I will not put!” Followed by giggling.

Helen was also involved for years with local chapters of the League of Women Voters. It was for the same reason she worked as a librarian — she felt that widespread access to quality information was a linchpin of society.

“She put the newspaper ink in my veins,” said one of her sons, Danny Westneat, a columnist for the Seattle Times in Seattle, Wash.

Helen also led, for five years, a program to house and feed homeless families through the Unitarian Universalist Fellowship of Yellow Springs, where she was a member.

Her husband, Dave, 89, recalls her love of hiking and the outdoors. The two backpacked through the Rockies and Alaska and traveled in recent decades to Australia, Italy and Costa Rica.

It was the spring ephemeral wildflowers of Glen Helen in Yellow Springs that got her going the most each year.

“She had in her head the blooming schedules of a whole host of wildflowers,” Dave said. “Hepatica in the earliest spring, then blue bells, then the trillium came out. She pursued these flowers to all corners of the Glen. It was her way of coming alive after the winter.”

Helen also enjoyed, almost more than life itself, the combination of orange and chocolate.

There will be a celebration of Helen’s life for Yellow Springs friends and family in the coming weeks. Look for an announcement here or contact the family. In lieu of flowers, please donate to her treasured Glen Helen, at 405 Corry St., Yellow Springs, OH 45387.