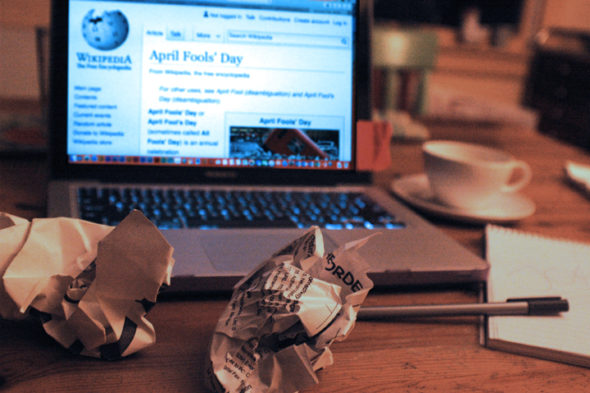 This is not the time to joke, even if it's funny.

Like the return of tourists to Yellow Springs each spring or the perennial debate about a local dog park, the Snooze received an email this morning from a villager equally parts confused and offended by an annual April Fools day story.

“How dare you,” began the screed written Barry I. Raitt, who had apparently not checked his calendar before typing the email, even though he must have known the beginning of April was coming.

“I’m seriously offended!” Raitt continued, still oblivious to the fact that the article in question was just a joke, and that the Snooze literally does this every year.

What began as a lighthearted spoof of local culture ended with the hastily written reader note, written in all caps and containing an ungodly number of exclamation points.

“Even if was a joke, it’s not funny!!!” continued Raitt, who was starting to doubt his initial assessment of the article as straight news, but nevertheless doubled down on his initial judgement of the piece.

Raitt added that those who were the subject of the story would absolutely be as offended as he was and that he speaks on behalf of those people. In addition, according to Raitt’s logic, if someone wasn’t offended after reading the article, then they are as guilty as offending the offended as much as the original offender.

“This is not the time to joke,” Raitt concluded, acknowledging that even if the fake article did make him laugh, he believes it was still in poor taste.

Feeling logically immune from counter-argument, Raiit fired off the email and simultaneously posted the message on several local Facebook forums for instant affirmation.

Please send your thoughts on this article to: 404error@ysnews.com