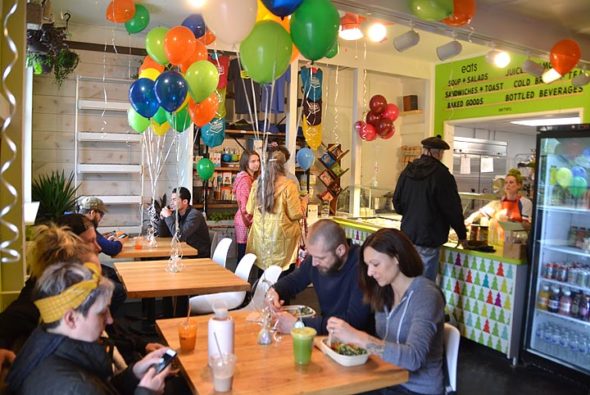 Greene Canteen was a bright spot on a drizzly morning this past Saturday, April 20. Owned by villagers Brittany and Tim Baum, the new eatery at 134 Dayton St. officially opened at 11 a.m., with a snip of a ribbon and a musical blast from singer-songwriter Khalil Nasar, hired for the occasion.

“I have a feeling things are always going to be bright at Greene Canteen,” Chamber of Commerce Executive Director Karen Wintrow said at the opening.

The colorful eatery — painted rainbow hues of green, blue, orange and purple — features smoothies, juices, soups, salads and sandwiches made fresh on site with an emphasis on vegan/vegetarian and gluten-free options. It also offers homemade soft pretzels and sells sustainable kitchen items, such as small composters and beeswax wrap, an alternative to plastic. Customers can take food out or eat in, with indoor seating for 18, plus a table for two outside.

“This is what we’ve been waiting for in Yellow Springs,” declared villager Kim Rohmann, enjoying a kale and Brussels sprout salad during a “sneak preview” event two days prior to the opening, along with friend Linda Sikes, who opted for the avocado toast.

“I’ll be here every day,” Rohmann added with a laugh.

Greene Canteen is the brainchild of Brittany Baum, who with her husband owns Brezel, a Bavarian-style pretzel bakery with locations in Columbus and Cincinnati. With the new eatery, they are striking out in a different direction.

“This is a completely new concept for us,” Brittany Baum said this week. While pretzels are on the menu at Greene Canteen, the focus is on fresh — and green — foods. And it’s green in another way, too, with all packaging compostable or recyclable, according to Baum. She also plans to source some produce from local farmers as the season progresses.

Baum and her husband moved to Yellow Springs about four years ago in order to live midway between Columbus and Cincinnati. Baum became active in the village as a member of the Arts and Culture Commission. And she was a founder of last October’s PorchFest, an event featuring an array of local musicians performing on porches and in yards across the village.

The new business venture took shape from the couple’s search for healthy food. While there are a number of great food options in the village, according to Baum, she saw a need for additional quick, healthy fare.

“We are always looking for a bite to eat that is relatively quick but still healthy,” she said.

And so a new business idea was born.

The couple began searching out a restaurant-ready space locally. When the right one didn’t materialize, they opted for their current storefront on Dayton Street, owned by local landlord Bob Baldwin. They began renovations to the space in late October, building out a kitchen and updating plumbing and electric. The work took a little longer than anticipated, but Baum said she is happy with the results.

“We took our time to do things right,” she said.

Greene Canteen has hired 10 employees, eight of whom live in Yellow Springs — one even moved here to work at the eatery, according to Baum. Several of the positions are full-time, she added.

One local employee is Carl Moore, onetime owner of CJ’s Southern Cooking, previously located at the south edge of town. Moore, who has over 30 years of experience as an executive chef, praised Baum for assembling a “great team.”

“I look forward to teaching what I know, and learning from her,” he said this week.

Staff training began last week and will continue for the next few weeks. During that time, Greene Canteen will be open Wednesdays through Sundays from 11 a.m. to 5 p.m. Baum ultimately plans to offer daily service from 8 a.m. to 7 p.m. And she may add some late-night hours in the future, taking advantage of the eatery’s proximity to the Gulch.

At Saturday’s opening, the enthusiasm was palpable. About a dozen people surged into the eatery when the doors opened, with numerous others flowing in later.

One of Saturday’s first customers was Village Council member Kineta Sanford, there with her husband, Jonathan Hartlaub, and his brother, Isaac Hartlaub.

“I’ve been anticipating this for a long time,” she said. “It’s the kind of food people have been waiting for — grab and go, light, healthy.”

She’d previewed the food at a recent Village Human Relations Commission event. “I was blown away by how delicious it was,” she said.

Other customers praised both the food and the vibe.

“There’s nothing like it in town,” Morse, who works at House of AUM, said.

“I’m really excited about having healthy food in town. I think it will do great,” she said.

Customers with specific dietary needs said they were especially happy to have a local place with a vegan and gluten-free emphasis.

“I’m excited for the gluten-free options,” said Connie Logan, who lives just outside of town, at the Thursday sneak preview. She’d been following Greene Canteen on Facebook for months, she added.

“We put it on our calendar,” said Sherry Harding of the opening. She and her wife, Jenifer Borke, “eat gluten-free and try to eat healthy.”

Owner Brittany Baum said this week that she felt “huge relief” after the opening. Her register showed 137 transactions on Saturday — a strong start, she believed. The most popular items included the kale and Brussels sprouts salad and the Dirty Banana, a frozen banana drink with peanut butter, chocolate, cold brew coffee and vanilla.

“You think you have a good idea, but you never know if other people are going to like it,” Baum said.

According to numerous customers last week, people like it.

“Visually it looks like everything is made with love,” noted villager Debbie Henderson on Saturday. She held up her bright orange “sunrise” juice blend and took a sip.