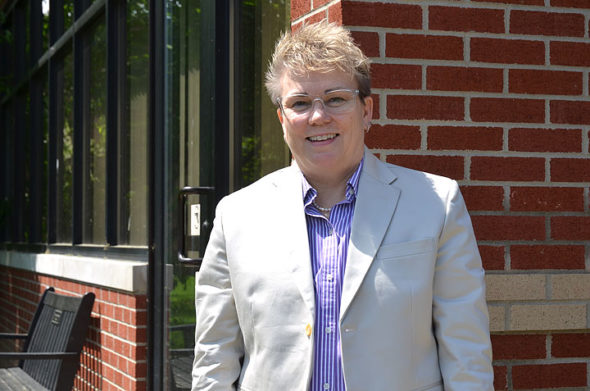 Terri Holden is expected to be appointed as the Yellow Springs Village Schools' next superintendent. (Photo by Carol Simmons)

Holden is currently the executive director of teaching and learning at the Winton Woods City School District, located in northern Hamilton County. Holden will replace Superintendent Mario Basora, who will leave the local district after nine years to be the next superintendent of Huber Heights City Schools.

Holden was one of three candidates who visited the village on Saturday, May 11, to give a public presentation to community members and district staff and interview for a second time with the school board.

In the press release, School Board President Steven Conn said that Holden was the board’s unanimous choice and also the first choice of those who attended the public forum.

“We were impressed by her deep understanding of curricular issues, by her self-evident capacities for empathy and understanding and by her passion for kids and education,” Conn said. “We’re thrilled that she’s coming to Yellow Springs.”

The school board is expected to appoint Holden to a three-year contract with the district, the press release noted. Other contract details are not yet available.

“It is both an honor and a privilege to have been named as the next superintendent of Yellow
Springs Schools,” Holden said in the press release. “I will work tirelessly to continue the tradition of creating fearless thinkers, who engage deeply in learning, who place service to others above themselves, and who value and seek out diversity in all its forms.”

Holden plans to move to the village with her wife as soon as possible, she said in a phone interview Monday afternoon. Her contract begins Aug. 1, but she plans to begin getting acquainted with community and more familiar with the schools in the time leading up to her official start date.

A longer profile of Holden and details of her talk on Saturday will be in this week’s News, Thursday, May 16.