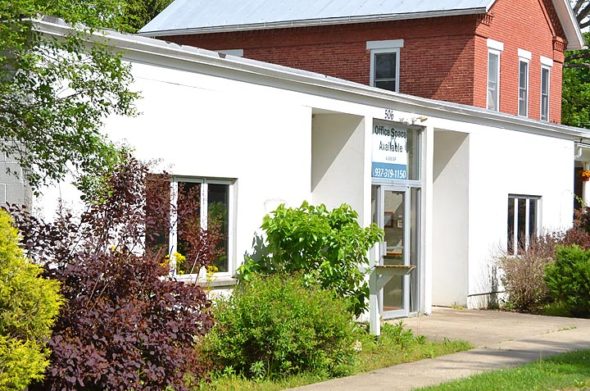 A homegrown local business has moved away from Yellow Springs.

Niche magazine publisher Ertel Publishing relocated to Xenia in March, after 30-plus years in the village. The company has been under new ownership since July 2017, when founder Patrick Ertel sold the business he started out of his Davis Street home to three employees: Brad Bowling, Jeremy Cundiff and Erin Puro.

The trio are purchasing the company over a 10-year period, according to Bowling last week. Ertel Publishing’s longtime headquarters at 506 S. High Street was not part of the sale, however. Since the sale, the new owners have been renting space from the building’s owner, Patrick Ertel, who purchased the property from YSI in 2001.

“It was always our plan to leave the building for something smaller and cheaper,” Bowling said of the move.

And while the new owners looked at other locations in Yellow Springs, they ultimately chose to relocate to less expensive office space at 292 N. Detroit Street in Xenia.

“It was a move that we could make to help our bottom line,” Bowling explained.

Ertel Publishing continues to lease storage space in the building, and the Morgan Family Foundation also remains a tenant there.

Reached for comment last week, Obstalecki said he is seeking a tenant for the 4,000 square-foot front portion of the building, whose total size is about 7,500 square feet. Over the longer term, Obstalecki envisions turning the property into a cooperative professional space that would cater to local entrepreneurs and small businesses.

“My long-term vision is a one-stop-shop incubator with professionals working in the same space,” he said.

Obstalecki moved to the local area about a year ago, from Ithaca, N.Y., to work as an engineer at Wright-Patterson Air Force Base. He lives on the outskirts of Yellow Springs.

Founded by Patrick Ertel in 1988 to publish “Antique Power,” a magazine for tractor collectors and enthusiasts, Ertel Publishing grew from a home-based business to a significant local employer. At its height, the company employed 12 full-time workers at its Yellow Springs headquarters, as well as working with freelancers around the country, according to Ertel this week.

He credits early partners, including graphic artist Lori Beckman, as being “instrumental” to the magazine’s success.

Ertel grew up on a farm near Cedarville, and moved to Yellow Springs in 1969. While working as an aerospace engineer at Wright-Patterson AFB, he developed an interest in antique tractors. That interest quickly led to the launch of “Antique Power,” a place for antique farm equipment enthusiasts to explore their passion in print. The publication is now the world’s largest antique tractor magazine, according to the magazine’s website. Ertel was able to leave his job at the base within a few years of getting the company off the ground, the News previously reported.

The firm also launched an annual Vintage Truck Show at Young’s Jersey Dairy. That event is entering its 18th year, with this year’s show scheduled for Aug. 3, 2019.

Ertel Publishing outgrew several locations around Yellow Springs over the years, including Ertel’s Davis Street home and a rented house on Glen Street. In 2001, the company purchased the former YSI building at 506 S. High St. to pave the way for further growth.

“That was one of the highlights,” Ertel recalled. “We finally had enough space to expand.”

Through the early 2000s, the company stayed with print publishing and weathered the explosion of digital media, according to a 2015 News report. New projects at that time included the purchase of “Charlie,” a Charleston, S.C., magazine focused on that region’s arts and culture, as well as the launch of High Street Communications, a marketing and advertising division.

Current co-owner Brad Bowling, who was hired as managing editor of “Antique Power” in 2013, acknowledged last week that the company has felt the effects of the decline of print.

“It’s no secret that print publishing has been decimated,” he said. Many publications have folded or gone online, he added.

Under the new owners, Ertel Publishing continues to put out two of its own magazines — “Antique Power” and “Vintage Truck” — and currently publishes one magazine for a client, a bimonthly collectible tractor club magazine. The business also does “a lot of one-offs,” Bowling said, producing books and publications for clients on a contract basis.

“I tell people we know we’re on the Titanic, but we’re still keeping our feet dry,” Bowling said of the current publishing environment.

He expressed optimism that the company can stay the course with print “and still be profitable for many years.” Readers of the company’s flagship magazines are loyal — and they like print, according to Bowling.

“Our readers want a print magazine,” he said. “They’re sticking with us.”

“Antique Power” has a circulation of 51,000, and “Vintage Truck” has 35,000, according to both magazines’ websites. Both publications are available by subscription and on newsstands.

Ertel Publishing currently employs seven full-time workers, down from its high of 12 several years ago. Two employees are based out of the Xenia office, while the remainder work remotely. Bowling is presently the sole employee who lives in Yellow Springs.

Morale at the company is good, according to Bowling. The staff is smaller, but several employees have been with the company for years. Co-owner Cundiff, for example, has been a graphic artist at the company since 1999.

He credits Patrick Ertel with a prudent business approach that the current owners aim to continue.

“Patrick had good business insight and never tried to go nuts expanding,” Bowling said. “We were always a small group that did a lot of work. We’ve been frugal and it’s paid off.”

Patrick Ertel is now retired, and he and his wife have moved away from Yellow Springs.

“I feel like the luckiest person alive,” Ertel said this week. “I was able to turn my hobby into a profitable business.”

While he praised Yellow Springs as a “wonderful place to be,” he expressed disappointment at what he views as Village government’s neglect of his enterprise.

“In 30 years, no one called to say ‘hi,’” Ertel said of Village officials.

Ertel Publishing’s move out of Yellow Springs means a loss of income tax revenue to the village. In previous years, the company was among the top 25 business income tax contributors, according to a 2014 News report. More recent rankings and tax amounts were not available for disclosure from the Regional Income Tax Agency, which collects local taxes for Yellow Springs and other Ohio municipalities.

Ertel Publishing may be gone from Yellow Springs, but it retains one last tie to the village: a local mailing address.

“We still have our Yellow Springs P.O. box,” Bowling said. “After 32 years, it didn’t seem right to change that on readers.”