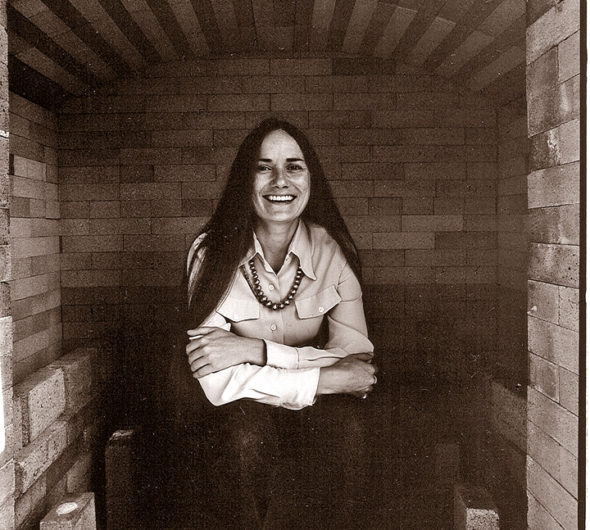 The image above was taken in 1974 by Antioch Photography Professor Cal Sparks. 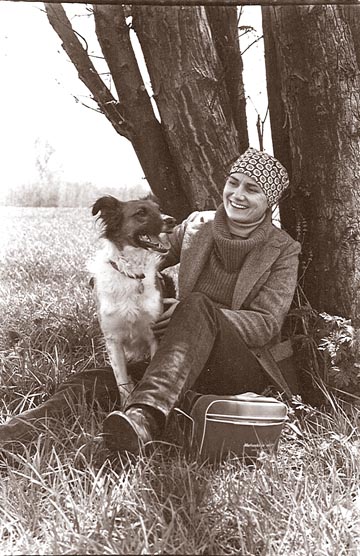 Shirley at Ellis Park with her dog taking a break from photographing.

The image above was taken in 1974 by Antioch Photography Professor Cal Sparks. It was a different time. Everyone was younger, the Antioch Art Building was brand spanking new, the college’s dorms overflowing. Some students had cars and there were motorcycles — at one point, there were over 20 BMW bikes, but no Harleys. So the town was not noisy. It was, instead, simultaneously quiet, easygoing and alive with significant social activism, intelligent creative play and high-minded hi-jinx spilling out from the Antioch campus. Yellow Springs was, at times, the subject of caricature, but by no means yet a touristy cartoon. The arts in New York, across the country and in Ohio were alive with experimentation in performance, media, paintings posited as sculpture and art installation projects placed outdoors in urban and natural environments, all with only passing attention given over to making money by making stuff. Most of that was in dynamic flux and had yet to coalesce into “de rigeur new genres.” It was at the front end of this very special decade of the ’70s that Karen Shirley joined the Antioch College Art Department faculty.

Karen was born at home in Belle Plaine, Iowa, a small farming town in the heart of Grant Wood country (consult Google for insight into various citations in this text), about 30 miles west of Iowa City and 70 miles North of Eldon, where the farmhouse of “American Gothic” fame still stands. Her folks were cut from the same fabric as the plains people portrayed by Wood: simple, honest, independent, resilient, determined, reserved and hard-working, but with large and generous hearts. Her mother, Lulu Waterman Shirley, was a polished seamstress; her father, Lloyd, an appliance repairman.

When Karen is about 10, Lloyd takes a position as bookkeeper for Western Buyers, a livestock brokerage firm, and the family relocates to its headquarters in Algona near the Minnesota border. There Karen, in classic midwestern fashion, moves into her teens, is a lifeguard, a cheerleader and, in the summers, de-tassles corn on contract. She develops a lifelong close circle of friends, all college-bound. So, she sets her sights on college as well, ending up at Antioch, and graduates with a degree in art in 1961. With a strong sense of adventure set in motion by the college and her co-op job experiences, she moves to San Francisco, learns about Japan and, on a dare, buys boat passage to Osaka in 1963. She settles in Kyoto, living on scant funds for nine months, teaching English, studying flower arranging and calligraphy and rubbing elbows with expatriate San Francisco Beats in the orbit of the poet Gary Snyder. Returning to San Francisco, she enrolls in graduate studies at Mills College, earning an MFA degree in ceramics under Antonio Prieto. After some struggle, she receives an appointment to teach ceramics back at Antioch and returns to her alma mater in 1967. At first, her teaching focuses on the making of functional ware, but soon broadens to include more eccentric object-making, informed by the San Francisco-based “California Funk” art movement. While she continues to teach methods and aesthetics surrounding pottery making and the dynamic ceramic traditions in cultures around the world, she prods her students and herself to branch out into more experimental modes of working. This move is most dramatic for her when she lets go of using clay altogether and begins making cast forms by tamping damp mason’s sand into large geometric forms. She is soon invited to execute sand installations in a number of museum and university galleries around Ohio, as well as in Chicago and Stuttgart.

During this time, Karen is working full time to deliver a full complement of courses in ceramics while managing the clay studio facility, doing student advising and wide-ranging college committee work. Through the ’70s and into the mid-’80s, as college enrollment declines and her operational budget cut, usually by around 10 percent a year, she asks herself annually if there are still things worth working on at the institution. Each year, for the next 25 years, the answer is “yes,” and each time she screws her head down to figure out how to make the ever-leaner budget stretch in ways that those studying under her hardly notice. With the departure of the art history faculty member, she picks up those reins and, in addition to her ongoing courses in ceramics, offers first a course on emerging issues and activities in art titled “Contemporary Forms,” followed three years later with a modern art history course covering roughly the period 1900–1960.

As an academic advisor, Karen is demanding, always prodding her advisees to figure out how to take the fullest, most ambitious advantage of their years at Antioch and its less rigid and more experimental approach to the liberal arts canon. She presses each one to work as hard and creatively as possible while at Antioch to discover and develop their core self. Throughout her years, she is one of a scant number of women faculty. Women faculty at the college number around 15 percent of the total faculty in a time when feminist discourse is emerging. As an autonomous woman, she is an important mentor and model for these young women, trying to figure out how they can be equally independent as they chart their own courses into adulthood. For some, she is the only female faculty they study under in their years at the college.

In 1977, Karen’s focus on the use of natural materials moves to looking at the landscape itself — in particular, the area on the north edge of Yellow Springs in and around Ellis Park and Whitehall Farm. Over the next decade, she produces an extended visual essay that employs a diversity of media — painting, drawing, some film work, photography, Xerox transfer prints and celadon-glazed porcelains.

All of the works from this period are, in various ways, abstract distillations of the gentle unfolding of time in this rural setting. Her focus shifts increasingly away from depiction to evermore reductivist abstraction. In the ’90s, she moves indoors to paint a handful of interiors and then focuses simply on pools of sunlight spilling through a window and onto her studio floor. From this point on, her work is entirely abstract and increasingly minimalist, whether derived from natural subjects or solely geometry. However, it always continues to carry a softness and nuance derived originally from her deeply rooted connections to the rural landscapes of Iowa and Ohio. One could say that, while she left the Heartland to go to college and then travel to and be stimulated by diverse cultural environments, the Heartland and its ethos never left her. In her last decade, she is particularly inspired by the writings of Emily Dickinson and David Hinton, the ethereal art work of the Buddhist nun Otagaki Rengetsu, and themartists Ellsworth Kelly, Carmen Herrera, Richard Tuttle, Vija Clemens and, most recently, Hilma Af Klint. At the time of her death, she is producing a series of small, monochromatic objects able to function as painting or sculpture.

In 1968, Karen decides that there is nothing more of significance to try to do at Antioch and takes early retirement. In the years that follow, she remains keenly loyal to the Antioch program, which took shape under college presidents Morgan, Gould and McGregor. When asked, she adheres adamantly to the value of Antioch’s approach to liberal arts coupled with foreign study and its co-op job program. She had witnessed its ability to produce well-educated, curious, energetic and intellectually and professionally nimble adults, and thought that more narrow and specialized career training curricula actually sold students short.

There will be a memorial for Karen Sunday, May 26, at 2:30 p.m. in the Glen Helen Building. During the Antioch Alumni Reunion in July, there will also be a remembrance of her and other recently departed former Antioch faculty members along with a memorial exhibition of segments of Karen’s artistic production in the college Art Building gallery.

In lieu of flowers, people are encouraged to make contributions to the National Resources Defense Council or Doctors Without Borders to support the valuable work they do.