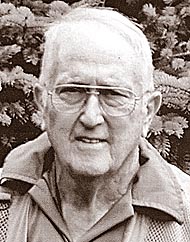 Ralph grew up in Columbus and was a camper at Columbus YMCA Camp Willson near Bellefontaine, where he later became a camp counselor and assistant director. He was active in the Boy Scouts, attaining the rank of Eagle Scout and later becoming a scoutmaster. He helped establish an Explorer Scouts Troop in Yellow Springs during the mid 1970s.

Ralph attended The Ohio State University, graduating in 1950 with a Bachelor of Science degree in agriculture. He earned a master’s degree in environmental education from OSU in 1976. In following years, he taught several classes at OSU.

While at Ohio State, Ralph played in the OSU Marching Band. He continued to play as an active member in the OSU Alumni Band (TBDBITL) for many years.

Ralph married Jean Alice Waldschmidt, also from Columbus, on May 26, 1951. Together, they raised three children: John, Carolyn and Jim, who was a 1976 YSHS graduate.

Ralph was an avid naturalist, interpreter, outdoorsman and photographer. Following two years in the US army and a stint with Pfizer Labs, Ralph focused his career on wildlife and habitat preservation, parks and environmental education.  He spent three years as a recreation supervisor for the Ohio Department of Natural Resources, followed by four years at the Columbus and Franklin County Metropolitan Park District as interpretive specialist and then supervisor of public information.

In 1973, Ralph became director of the Glen Helen Nature Preserve in Yellow Springs, Ohio, where he influenced everything from fundraising for the Glen to programs, outreach and much more.  Recently he told his wife, Jean, that his time at the Glen Helen was the best of his life.

Following his time in Yellow Springs, Ralph served one year as the director-secretary of Miami County Park District in Tipp City, Ohio, before becoming the chief of the Division of Natural Areas and Preserves for the Ohio Department of Natural Resources, where he served from 1991 to 1994, before retiring.

Ralph authored three books about hiking in Ohio, including “50 Hikes in Ohio,” with the 4th edition published in 2016.

Preservation of Ohio’s natural areas was Ralph’s passion. He was instrumental in the preservation of Cedar Bog Nature Preserve near Urbana. A plaque there dedicates the boardwalk trail in his name.

Ralph was preceded in death by his daughter, Carolyn.  He is survived by his wife, Jean; two sons, John (wife Diane) and Jim (wife Karyn); his sister, Margaret; and four adored grandchildren, Kalen, Tristan, Tanner and Lauryn.

In lieu of flowers, memorial donations can be made to The Glen Helen Association or the Cedar Bog Nature Preserve.