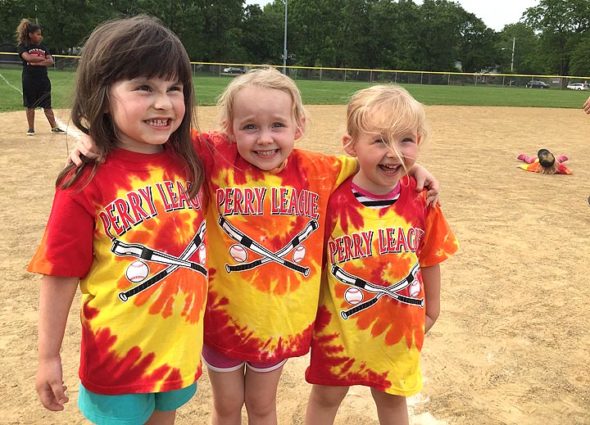 Fiona Garcia, Violet Ficke and Amber Ficke cheesed for the camera at last Friday’s Perry League game — Coach Jimmy was able to fit them into the batting line-up at the proverbial bottom of the ninth. (Submitted Photo by Heather Hunter)

I got to Gaunt Park later than I planned and was delighted by the crowd of kids, parents, grandparents, aunts and uncles already there — there were 120 people spread out on their blankets, in their chairs, on both diamonds.

Cayden Maloney, 4, with his lovely curly reddish-rust hair, calmly swings his bat, which is as long as he is tall, and pops a hot grounder into the clutch of children hungry for a ball at the pitcher’s mound.

Rocket Cowperthwaite, 7, is a T-ball veteran. He’s played five summers now; his first was when he was three in 2015. Even then, he was as confident as he is this season.

And then with the grace of a trained athlete, he swings strong and swift and sure — and then he flashes like a streak of lightning to first base.

Natalia Ramirez, 7, is another veteran. She shows her considerably polished skills when she throws about 75 balls to me. She winds up, her face screwing up in her determination, and then rockets the ball to me, at me, throwing it as hard as she can.

Playing next to her is the remarkable Amelia “Millie” Linse, 6, who is on the lookout for every ball, alert to all the action in the field. She and I get into a throw-scooping-up-throwing-back, throw-scooping-up-throwing-back routine. She will throw a ball she’s fielded, her throws accurate, her throwing style picture perfect. I catch her thrown ball and immediately, almost simultaneously, throw another ball to her. We do this, she-throws-I catch, I-throw-she-catches, 10 to 11 times between batters. The rhythm, the repetition, the dance of it, is thrilling.

Rowan Arthur, 6, a handsome, freckled fellow in only his second season, plays like a pro. He’s a sturdy, naturally well-built slugger, holding his bat perfectly, his grip and swing strong. You watch his concentration, his athletic build, his seriousness-of-purpose, and you have visions of the amazing young adult he’ll become, who creates confidence wherever he goes. Thanks, Rowan.

Reese Tobias, 4, is back this summer, mature enough and experienced enough to be at the plate and run the bases on her own. It is a very cool thing to witness when, just a year ago, she had her brother running with her, guiding her, protecting her.

“People aren’t doing what they’re supposed to be doing,” she said.

“No one is doing what they are supposed to be doing,” she repeated, her brow wrinkled, her concern vivid.

We had just begun play, and we didn’t have coaches at second or third yet. I thought that was the problem. I told her we’d fix that, but she remained distressed. I was sorry she was worried, but I was and am quite impressed with her strong feelings and clear idea about what should be happening.

Amandine Bouquet Saber, 5, was a joyful, exuberant, and very active and agile player. Her mom, Dorothèe, patiently pronounced and then spelled Amandine’s name for me. Dorothèe is French, speaking French and English while mothering a remarkable young athlete.

“I sometimes say random words,” she explained and then did it again: “Banana.” “Okay,” I said, “banana,” having learned one more thing to enjoy about this amazingly gifted and experienced T-ball player.

Jo Jo Worley, 4, struck me as glamorous as well as athletic. Then I saw her mother, herself quite glamorous, and marveled again at how we are so often so very like our parents, even as we are uniquely individual and different.

We started to run out of time, but managed to squeeze in three final batters — Fiona Garcia, 5; Violet Ficke, 4; and Amber Ficke, 3. This trio was so loving and happy, it was miraculous, a gift from the gods, from Allah, from Jesus, from the God of Abraham, from Krishna, from that Great Spirit in the Sky. Thank you Aimee, Angelo, Kyle and Heather, ye magic parents four.

Then there was Kaysi Reichelderfer-Wolff, 3, this eentsy-weentsy, teeny-weeny babe-in-arms playing T-ball for her first time. She hit the ball off the tee and then wondered, now what? I offered my hand as we told her,

“Now you run to first base.”

She wrapped her hand around my index finger, and we walked-trotted-strolled to first. There, she stepped on the bag, still holding my finger in her fist.

And this is the great payoff for doing all this T-ball stuff: Kaysi continued to squeeze my finger. I had a 3-year old darling calmly, assuredly, nonchalantly holding my hand, something that would never happen anywhere else in my life. My heart soared.

And that’s our Perry League, Yellow Springs’ T-ball program for all kids 2–9 years of age, regardless of their race, color, creed, sexual orientation, ethnicity, spiritual inclination or practice, ability or disability — or their propensity to be swift or brave or miraculous or loving. Please come on out and play some ball with us. We’ll be out there at Gaunt Park from 6:30 to 8 p.m. for nine more Friday nights. We’d love to have you.