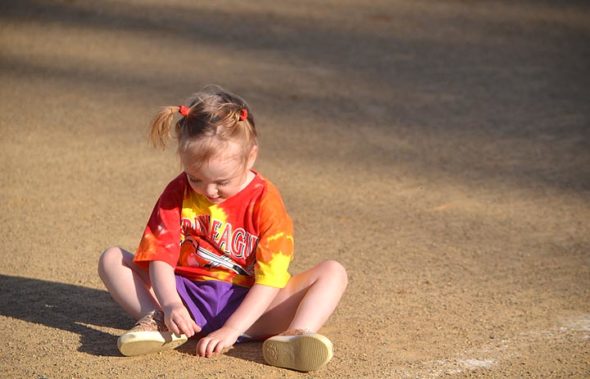 Perry League— Where everybody knows your name

Laurelai Myers, 3, is sitting in the dust next to the third base bag. Her dad, John Myers, is there with her. John volunteers to be our third base coach all evening — we have a volunteer on all three bases. Kids often don’t know where to go, so we tell them where to go — from first to second, from second to third, from third to home — after the batter hits the ball off the tee. We get each child’s name, and tell each other what the kid’s name is as we send him or her on to the next base. This name thing and telling kids where to go are essential ingredients for a successful night of T-ball, because most of the children know little or nothing about baseball. I told Aspen Reitsman, 4, to touch her toe to the home base plate, telling her this gave her a run. “A what? You want me to run?” she asked. She had just run around the bases. Now she is to run again? “No, no,” I said, explaining that a “run” was a “point” her team earned when she came home. “Came home?” “This is called home,” I said about home plate. “You get here, you touch the home plate with your foot or toe and you earn a point — a ‘run.’”

Well, Laurelai couldn’t have cared less about all this baseball talk. With her Caribbean-Sea-blue eyes, sun-bright, her spot sitting in the dust, which she was busily gathering into piles, was the perfect place for her.

Grayson Smock, 6, with his black-framed glasses and his beautiful, penetrating black-brown eyes, seemed so mature — it was as if he were someone ten years older. He was completely T-ball-spirited and joyful; he had perfect form as an eager batter, obviously loving the diamond, the bats, the balls, and running the bases, but there was something a bit mysterious, something wise, knowing and knowledgeable about him.

Topher Besson, 3, came eagerly to the plate. A small fry, something very young and intoxicatingly sweet, he was nonetheless strong and quick. He swung and missed.

“Wait, Topher,” I said as he started running to first. I was going to give him another swing, another try at hitting the ball.

He was honestly wondering, actually marveling a bit — his surprise that I knew Topher’s name reminded me of how very important it is to know the children’s names — it is intimate, it is personal, it is affirming, it is powerful, and just a little bit mysterious as well. I mean, why does our name mean so much to us? How does our name embody us? Be us?

I tell John I know because I ask the kid and the kid’s mom or dad. And that I ask more than once. “Okay,” he said.

Nora Carr, 6, comes to bat six or seven times. She shines with happiness and self confidence — and rightly so: she hits well, knocking the ball off the tee with her first or second swing, and then runs around the bases as fast as a rabbit running for its life on a dog race track in Florida.

Leyna Badger, 6, tells me with great pride and aplomb she’s lost teeth — her top two front teeth are new, small, barely breaking through the gums. Wonderful, I say, and then she tells me she is going to Niagara Falls this weekend with her wonderful mother, Lasena.

Jack Rudegeair, 3, is here for his second night with his dad Shawn — a former T-baller who went on to pitch in college, having developed into quite an athlete. Shawn’s dad Lance, who came out on opening night to cheer on his grandson Jack, coached T-ball with me 30-some-odd-years ago when Shawn was just a tyke.

Clay Husk, 6, a handsome and quite serious young ball player, comes to bat five or six times. He bats well, focusing like a much more mature person. He hits quickly, cleanly, and then flies around the bases as fast as a Serengeti cheetah.

A very, very blonde Diamond Cary, the very model of a towhead, starts his evening on a blanket next to the field with Carrie Cary doing some of the caretaking. When he comes to bat, I am impressed with his physical coordination and ability. I had only seen him crawling earlier, not sure he even walked yet. I look forward to seeing more of him later this summer.

Russell Besson, 13, and Tommy Moore, 11, both T-ball veterans and graduates, threw balls out to kids from the first base line. Brad Besson, Russell’s dad, was one of the several dads who helped them out, throwing and catching balls himself.

“Ninety-eight!” Amelia and Avery proclaimed at the end of the evening’s play. I threw two more balls to them and made it a perfect hundred.

And that’s our Perry League, Yellow Springs’ T-ball program for all kids 2–9 years of age, regardless of their race, color, creed, sexual orientation, ethnicity, spiritual inclination or practice, ability or disability — or their propensity to run like deer or howl like lions. Please join us, and play some ball with us. We’ll be out there at Gaunt Park from 6:30 to 8 p.m. for eight more Friday nights, and we’d love to have you.