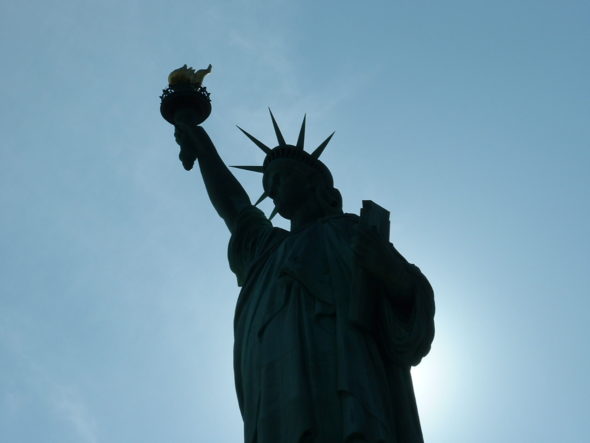 “Lights for Liberty: A Nationwide Vigil to End Human Detention Camps” is spearheading mass mobilization against the Trump administration’s human detention camps by sponsoring vigils in more than 75 locations around the United States and the world. Beginning at 7 p.m. on Friday, July 12, advocates, activists and impacted persons will speak on the issue of human detention camps, and at 9 p.m., participants around the nation and world will light candles in a silent vigil for all those held in U.S. detention camps. Locally, the vigil will be held in Courthouse Square, located at 23 N. Main St. in Dayton.

The following editorial was published in the July 4, 2019, issue of the YS News:

I didn’t know what America was capable of until I took my first Latin American Studies course in college. It could very well have been a course in U.S. colonial history or the history of slavery that evaporated the heroic image of America I held in my youth. But it was learning about the U.S.’s support in Central and South America for cruel dictators, violent counterrevolutionaries and exploitative corporations, and its role in overthrowing democratically elected leaders there, that reshaped how I thought of my nation and the human toll it would accept for self-serving ends.

Now, desperate Central Americans are escaping the unstable conditions we created, in part, through our imperialist meddling, to live in relative safety and with opportunity in the U.S. When they arrive here, however, they are housed in unsanitary, overcrowded and altogether inhumane detention facilities. America is once again willing to sacrifice the lives of men, women and children to push political goals rooted in xenophobia, racism and greed. The same people are expendable, only now it’s on U.S. soil.

Migrants and asylum seekers are being kept in custody longer and treated worse than allowed by our laws. The reports coming in are shocking: A pediatrician found a mother who struggled to keep her newborn warm and whose milk was drying up because of dehydration and malnutrition. Migrants and asylum seekers report sleeping on concrete floors in metal cages in frigid temperatures and resorting to drinking toilet water to stay alive. Inspectors found toddlers and babies in soiled clothes without diapers for weeks. A Homeland Security Department watchdog report detailed how migrants had no access to showers and were fed diets of only bologna sandwiches until they became constipated and needed medical care. Thousands of immigrants have reported being sexually assaulted by staff at detention centers, according to Department of Health and Human Services documents.

There is no justifiable reason for separating children from their parents and for detaining immigrants for long periods in these deplorable, dehumanizing conditions. Such treatment strips them of their dignity and undermines their ability to fight for their legal claims. But we should remember that “the cruelty is the point,” as Atlantic writer Adam Serwer wrote of our president’s proclivities last year. This week we have also seen, in Facebook posts, how Customs and Border Patrol officers coldly mock their suffering. The stated goal is to deter migrants from lawfully seeking asylum or otherwise attempting to enter the country and to curtail immigration. Inflicting lifelong trauma to do so is simply immoral.

Instead of building walls and putting children in cages, our country should be reviewing the painful history of its involvement in Latin America and seeking justice for our actions. As author Suketa Mehta points out in a column last month in the New York Times, “They are coming here because we were there.” Mehta writes that before asking migrants to “respect our borders,” we should ask if the [U.S. and Europe] ever respected anyone else’s. Allowing immigrants to resettle in a country can be a form of reparations, Mehta suggests. When it comes to Latin America, the U.S. has a large debt to pay, whether we do so by rebuilding their countries or letting them in to contribute to ours.

This Fourth of July, while I celebrate the holiday with fireworks and picnics in my community, I will also mourn for my country and at least 11 immigrants who died in U.S. custody since last fall and many more physically and psychologically harmed, including thousands of children not yet returned to their families. The image of what I thought America was vanished with that first Latin American Studies course, not to return. Now I also see America’s character as stained from its inception by the genocide of Native peoples and centuries of slavery. It’s a more honest picture, but one from which healing can begin.

At the same time America has also been a beacon of hope for many around the world as it strives, generation after generation, for a more meaningful equality and a more lasting liberty for its people. Despite my complicated relationship with my country, it is home. And I am willing to share it with those fleeing theirs.

One Response to “EDITORIAL — A national shame”